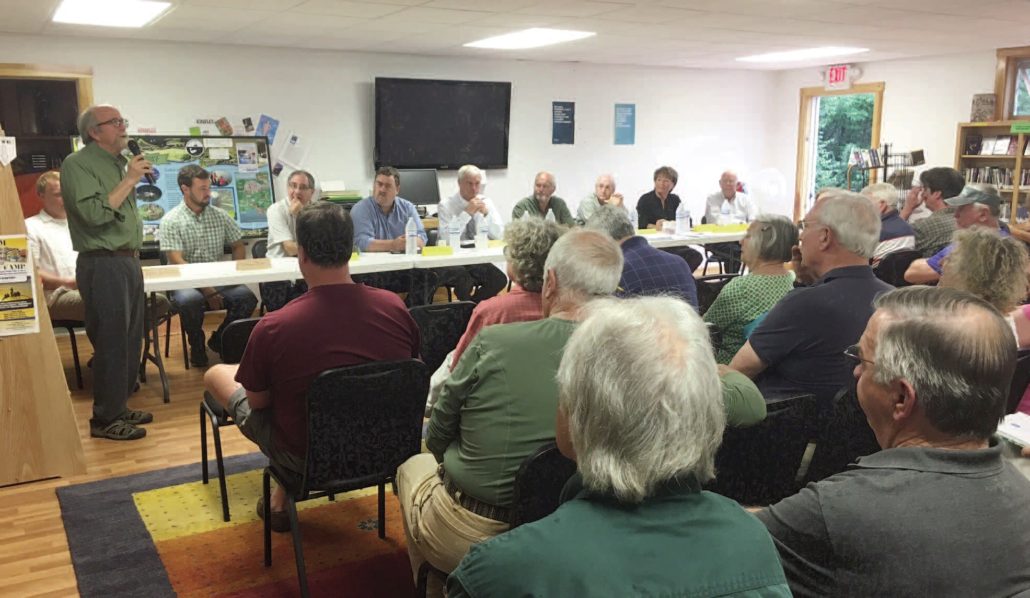 Many Palermo residents voiced their concerns about the reintroduction of lamprey in Sheepscot Lake during the annual town meeting recently. Contributed photos

I would like to bring you back to what will be our future if lamprey become reestablished in Sheepscot Lake. I began fishing in Sheepscot in 1981, primarily for landlocked salmon and togue. In 1986, after five years of fishing, I began to keep a Personal Fishing Record which was submitted to the Department of Inland Fisheries and Wildlife each year. On February 16, 1986, I made the following entry in the booklet after catching an 18-inch togue: “The togue did not have any lamprey marks which is uncommon in this lake. It had no fins clipped that I noticed and was in excellent health and very lively.”

During my previous five years of fishing, the majority of the landlocked salmon and togue that I caught were scarred by lamprey, often multiple times. Most of these wounds did not seem to be completely healed. Often, the wounds seemed fresh. Sometimes the lamprey was still attached to the fish when brought to the boat. 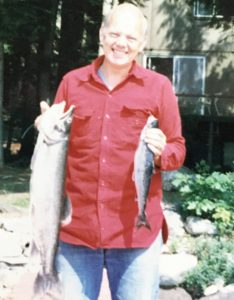 Peter Majeski displaying a couple of his catches following the controlling of lampreys in Sheepscot Lake.

On that February day in 1986, the togue was unmarked. This fact was so unusual that I made a special entry in the diary. Of equal importance is my statement that the fish was in excellent health and very lively. This differs from the lamprey marked fish which typically were not as lively. The wounds on the fish were not a pretty sight. Imagine a 6-inch long lamprey attached to a 12-14 inch salmon.

In the late 1980s, my next door neighbor complained of being bitten while swimming. At first, I did not believe her. Over the years, I have been swimming in about 10 lakes throughout Maine and have never been attacked by a fish. However, a couple of days later I was bitten while swimming in the evening. I swished off the fish. After leaving the water, I inspected the mark on my body which was oblong-shaped and about 1.0 – 1.5 inches long. It looked like the wounds that I saw on countless occasions on the salmon and togue that I caught. I looked at the wound on my neighbor. Her wound was similar but appeared deeper, possibly even breaking the skin. At that point, I was a believer. Lampreys do bite people.

The re-introduction of lamprey into Sheepscot Pond will result in a major environmental change. This re-introduction would again destroy the ecological balance and severely injure the existing fish population.

The Lake Report for Sheepscot Lake issued by the Department of Inland Fisheries and Game published in 1970 states, “The Department has recently initiated a program to prevent lamprey eels from entering Sheepscot Lake by closing the fishway each year in the outlet dam during the period of lamprey spawning migrations.” Twenty-two years later in 1992, the Department wrote, “A long term Department program to prevent lamprey eels from entering the lake by closing the fishway during their spawning migrations has met with some success.” In other words, this program was unsuccessful. Based upon my memory of a conversation with Dave Banton, of Palermo (now deceased), I believe that the migration of both lampreys and alewives was stopped downstream from Sheepscot Dam in order to control the lampreys.

A self defense class to increase your confidence on Tuesday and Thursday, August 8 and 10, from 6:45 to 9:00 p.m. Participants should be reasonably healthy, wear comfortable, loose clothing, sneakers and no jewelry. Bring sturdy work gloves. Cost is $10 and includes Persuader Keychain. The class is limited to 10. Pre-registration is required by calling 993-6088 or emailing palermo@palermo.lib.me.us.

Free computer classes for those who want to learn computer basics, Windows 10, Excel, and much more on Tuesdays and Thursdays, beginning on Tuesday, August 15 through Thursday, August 31, from 7:30 to 9 p.m. If available, please bring a laptop. Computers and laptops will be available for those who need them. For a detailed Computer Class Outline, go to www.palermo.lib.me.us.

The Palermo Community Library is an all-volunteer library. If you’d like to volunteer, please call 993-6088.

The order deadline for the August 4 shipment of tree-ripened New Jersey peaches is fast approaching. Last call for that shipment will be Wednesday, July 26. There will be two more shipments, however, on August 11 and August 25, but quantities are limited. Some nectarines will also be available. Please call Connie Bellet at 993-2294 or e-mail pwhitehawk@fairpoint.net.

Proceeds from this sale will go toward a well for the Palermo Community Center and Food Pantry. Your support is highly appreciated!

The Palermo Community Garden, just off Turner Ridge Road across from the Athletic Field, will host Open Garden Day on Saturday, July 22, from 9 a.m. to noon, or a bit later. The cool morning is the best time to graze on fresh lettuces, crisp beans, tart sorrel, and aromatic herbs in the raised beds. This is an activity for the entire family to try new tastes and textures, and even eat some flowers! The blackberries should be ripe for picking, as are the raspberries, and the Egyptian walking onions in the front yard look like something designed by Dr. Suess. As the sun gets higher, the cool shade of the grape arbor beckons, and cold iced tea is waiting.

The Community Garden was built by Phil White Hawk and volunteer members of the Living Communities Foundation. Master Gardener volunteer Connie Bellet will be on hand to help with gardening tips. For those who have not visited the Palermo Community Center, Bellet will offer tours of the facility and explain its programs. This is a good opportunity to pick up a schedule for the monthly Dinner-and-a-Movie Series and even place an order for tree-ripened peaches from New Jersey.

The following local students have been named to the University of Vermont Dean’s List, in Burlington, Vermont:

Delaney Curran; of Skowhegan; Kaitlyn Sutter, of Palermo; and Kayla Christopher, of Oakland.

Thanks from food pantry

The Palermo Food Pantry thanks the generous people of Palermo who donated food for the pantry in the annual Stamp Out Hunger food drive sponsored by our post office. It was a great success again this year and is much appreciated by many families. Anyone who would like to support the Palermo Food Pantry may bring non-perishable food items on Tuesdays after 10 a.m., or call for a pick up. The pantry is open every Tuesday from 11 a.m. – noon and is located at the Community Center across from the ball field on Turner Ridge Road.

Due to the recent fire at the Hannaford distribution center in Portland, food donations from Hannaford stores to the local food pantries have decreased. The timing could not have been more unfortunate, as very little local produce is coming in just yet.

Over the past six years, the Palermo Food Pantry has grown from 15 families to at least 50 families. Most of these people are disabled elders, although there are some young families with children and infants who regularly use the Pantry. Since food stamps have been cut drastically, food pantries across the country have sprung up to provide a safety net for people facing layoffs, injuries, and family breakups. Here in Maine, a recent report stated that 20% of us face food insecurity. Most of those people are children.

Meanwhile, people still need to eat. The Palermo Food Pantry has access to food from Good Shepherd, but must buy it from the distribution center in Orono. Please consider donating money or non-perishable food items to your local pantry. The Living Communities Foundation can also act as a funding conduit for the Palermo Food Pantry, to purchase gas and food. Please send your check to: LCF, P.O. Box 151, Palermo, ME 04354, and put “Food Pantry” in the “for” line in the lower left corner to assure that all 100 percent of your donation will go to feed people.

The Palermo Community Library presents Sister Elizabeth Wagner, the award-winning author of Seasons in My Garden: Meditations from a Hermitage, on Sunday, April 30, at 2 p.m. She will disclose what led her to become a hermit and the founding of Transfiguration Hermitage, in Windsor.

In the prologue, Sr. Wagner writes: “I didn’t come to Maine gladly. In fact, I came kicking and screaming: ‘This is Siberia, Lord!’…I came to Maine because it was a place that I could earn a living in solitude… And yet for me, it felt as if I’d been exiled to Siberia.”

In her inspirational book, she reveals how her contemplative life of prayer, tending a garden and meditations, led her to a deeper understanding of the presence of God.

The Palermo Community Library is an all-volunteer library. If you would like to volunteer, please call 993-6088.

The deadline for ordering Vidalia onions, fresh from the farm in Georgia, is fast approaching. April 27 is the last day to call Connie at 993-2294 or e-mail pwhitehawk@fairpoint.net. These fresh, sweet beauties will be ready for pick up at the Palermo Community Center on Turner Ridge Road as of 8:30 a.m., on Saturday, May 6, as well as Sunday, May 7.

The onions are carefully packed into 25# boxes to prevent bruising on their express trip to Maine. The price is $27.00 per box. These onions keep up to 6 months, if they are kept in a cool place and not allowed to touch one another. Half boxes can be ordered for $16.00 a box (We have to buy boxes.). However, if you get together with friends and order four or more boxes, you get a discount of $2 per box. Recipes are available!