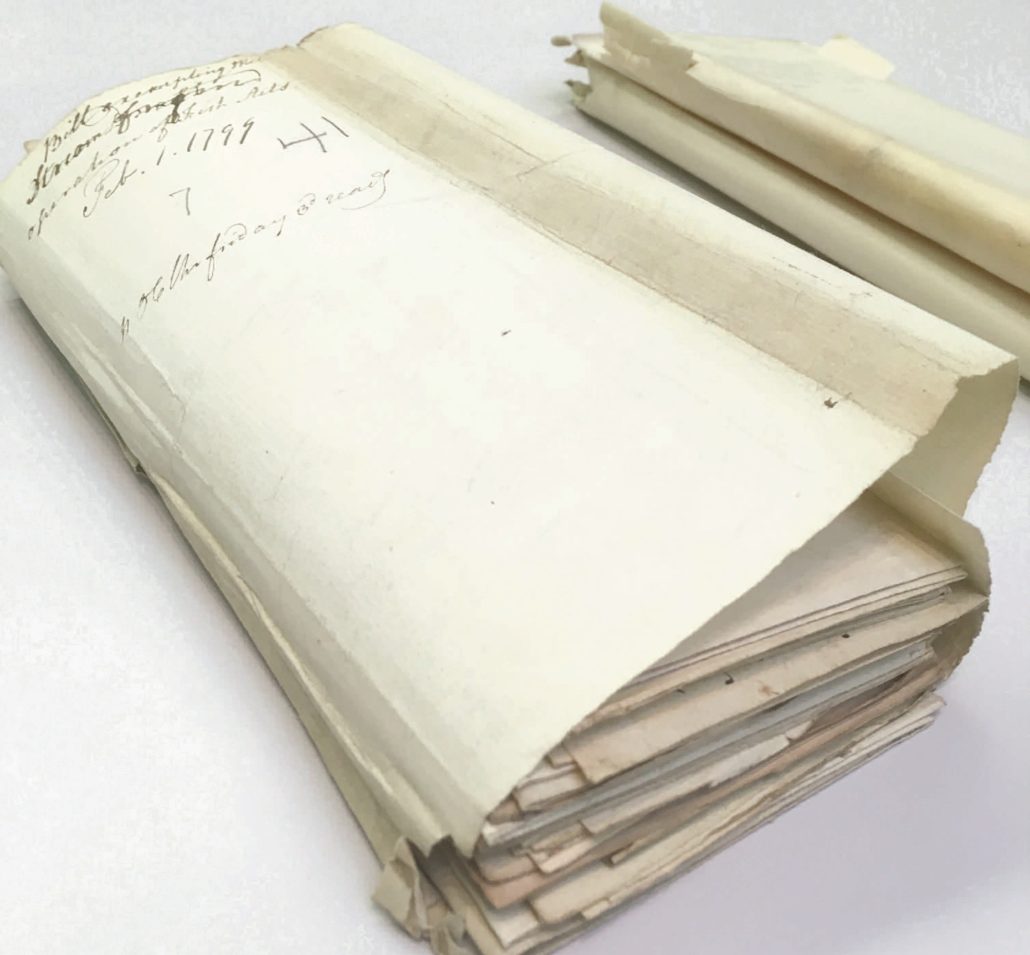 Original letters written by Stacy Blish and others, of Vassalborough, in 1799, submitted to the Massachusetts legislature. The decision of the governing body sealed the fate of the stream for more than 200 years, as numerous mills and factories were located along the banks of Mile Stream and little attention paid to its ecological health or fisheries. Photo of the letters from the State Archives, in Boston.

Documents recently found in Massachusetts Archives have shed light on the early history of China Lake’s Outlet Stream, reconfirming the historic presence of native alewives. Petitions and letters, signed and dated from 1798 and 1799, state that alewives were known to make their way up the stream to China Lake, but the presence of sawmills and grist mills prevented the migratory fish from completing their journey to spawning areas. The letters and petitions were written requesting that the Outlet Stream be exempted from fish passage laws to allow water-powered industries to flourish.

As was typical for the colonial period, smaller waterways like Outlet Stream were harnessed for power first because their flows were easier to control. Later, as the technology advanced, dams were built on larger rivers, like the former Edwards Dam on the Kennebec River, first built in 1837.

Letters and petitions from residents along the Outlet Stream were submitted in response to fish passage laws enacted in Massachusetts requiring dam owners to provide fish passage, due to local concerns about the declining populations of migratory fish, notably salmon, shad and alewives. In 1797, just one year before the residents along Outlet Stream sent in their letters and petitions, a law was passed requiring fish passage in Cumberland and Lincoln Counties. Maine was then a part of Massachusetts; records from this period can be found in Massachusetts State Archives, in Boston.

One letter written by Stacy Blish in January 1799 states:

“Stacy Blish, of Vassalborough, in the County of Lincoln, of lawfull age testify and say that I have lived near a Stream called Mile brook which empties itself into Sebasticook river for eighteen years last past that before any mills were built on said Stream Alewives used to pass up said Stream into a pond out of which it flows but no Salmon or Shad ever frequented it and for fifteen years last past since mills have been erected on it no alewives have been known to pass up into the pond.”

Another petition signed by 40 individuals noted, “the carrying on and Improvements of those Mills Are the principle if not the only means upon which a large number of respectable and industrious citizens depend on for acquiring property… That formerly the fish called Alewives (only) used to pass up said stream but for more than ten years None have been seen to pass up said stream…”

The letters and petitions were successful and resulted in the passage of a law titled, “An Act Exempting Mile Stream in the Towns of Vassalborough, Winslow and Harlem from the Operations of All Laws Regulating the Salmon Shad and Alewife Fisheries in Said Towns.” This act sealed the fate of the stream for more than 200 years, as numerous mills and factories were located along its banks and little attention paid to its ecological health or fisheries.