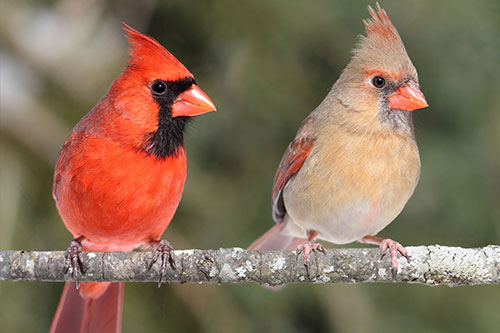 It seems this time of year people see more northern cardinals than any other time of the year. I know my wife and I see them year round at our home, visiting our feeders on a regular basis.

In picture postcards and greeting cards, you usually see them in a winter setting, especially around Christmas time. I have two such photos hanging on the walls of my TV room at home.

Northern Cardinals do not migrate, so they brighten the landscape wherever they reside. As a result of not migrating, they will live their entire lives within a mile or two of where they were born.

Few birds are so well loved as the Northern Cardinal. Even the female stands out with its red accents on brown. Also, unlike other bird species, the male and female cardinals both sing. Since the cardinal doesn’t appear to need much sleep, you may hear them singing in the morning well before sunrise.

Actually, besides gracing us with the beauty of its red feathers, those plumes serve a very important service to the cardinals. They keep the cardinal warm during the winter, helping the birds to survive the coldest of seasons. Seeing them in winter may help you to regain some of your personal strength, considering what that little bird is enduring during the winter. Cardinals symbolize family life and good family relations.

Some of our readers have reported that cardinals will come to the feeders at their windows, and peck against the glass. Well, males can be aggressive when defending their territory, and they frequently attack other males who intrude. This tendency sometimes leads cardinals to fly into glass windows, when they charge an “intruder” that is really their own reflection.

During the mating season, which begins in March, the males are so hot-blooded, that although they breed near birds of other species, they will never allow one of their own kind to set up housekeeping in their territory. A male cardinal can be seen frequently following another from bush to bush, emitting a note of anger, and diving aggressively towards the trespasser.

Once he is successful in driving out the intruder, he will perch himself in his favorite tree and pour out an unmistakeable song of victory and exultation.

Cardinals are good parents. The male cardinal shares in the duties of parenthood with his mate, feeding and caring for the mother during and after incubation. He will protect his family until they are able to safely leave the nest. Young cardinals frequently follow their parents on the ground for several days after leaving the nest, and will remain until they are able to fend for themselves. During this period of caring for its mate, the male will feed the female seeds, and to the common observer, they appear to be kissing.

An interesting note about the male is that during this period, he has has the ability to change his colors to a duller shade of brown and will look more like the female. This is a camouflage to help fulfill his duties as a dedicated parent.

Cardinals will usually be parents to 3 – 4 eggs. The incubation period is 12-13 days, and the young will leave the nest about 9 – 11 days after hatching. The cardinal’s expected life span is up to 15 years.

The cardinal is a seed eater with a strong bill. He also likes fruits, small berries and insects. Towards autumn they frequently go to the tops of tall trees in search of grapes and berries. Cardinals tend to be as fond of pulpy fruits as they are of the seeds of corn and grasses. They also eat a variety of weed seeds and insects that can be harmful to humans.

The northern cardinal is abundant and widespread. It has expanded its range over the last century and the current numbers remain stable. The bird actually benefits from the growth of cities, with so many bird feeders, that they have been thriving and increasing in population since the 18th century.

The cardinal got its name when colonists arrived in North America, because the male’s red crest reminded them of a Catholic cardinal’s biretta (headgear).

Is a cardinal hanging around your house? Don’t worry. According to folklore, a cardinal is a representative of a loved one who has passed. When you see one, it means they are visiting you. They usually show up when you most need them or miss them. They also make an appearance during times of celebration, as well as despair, to let you know they will always be with you.

Erecting bird feeders is the only way to get them to stay around. It is illegal to own a cardinal as a pet or to kill one. They are government-protected wild bird species and protected pursuant to the Migratory Bird Treaty Act of 1918.

So, observe them, love them, but leave them to their own world. Should you come across an injured cardinal, it is best to contact an avian rehabilitator in your area.

Which NFL team has relocated three times from its original city?