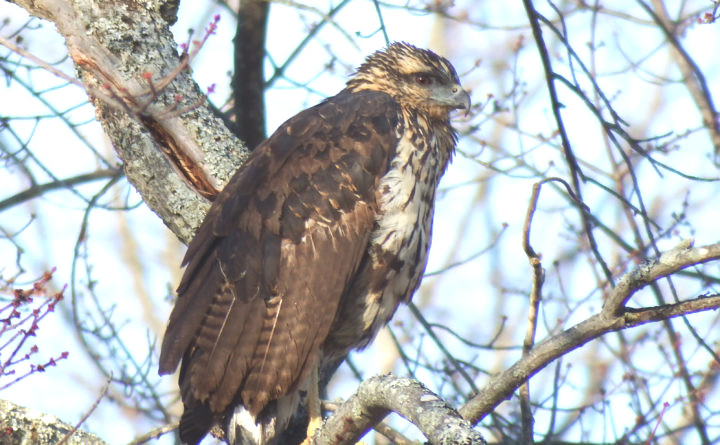 I was saddened to hear of the unfortunate outcome in the saga of the great black hawk that found its way to Maine, only to discover this place, especially December to April, is not friendly to tropical birds.

In case you haven’t heard, a great black hawk appeared in Maine in August 2018. A resident of tropical Mexico through Central America to Peru, and northern Argentina, it had been spotted in South Padre Island, in Texas, in April 2018, a little north of its normal range. Last August, this individual surfaced in Biddeford. It was determined to be the same bird based on the similarities in what is highly variable immature plumage, from photographs that were compared.

It again disappeared until reappearing in Deering Oaks Park, in Portland.

The great black hawk, Buteogallus urubitinga, is a bird of prey which also includes eagles, hawks, and vultures. They feed mainly on reptiles, other small vertebrates and large insects, mainly chasing them on foot. This particular one had adjusted its diet, and was doing all right dining on gray squirrels in the park. They are about the size of an osprey, but larger than our red-tailed hawk.

The adult bird is 22 – 25 inches long and weighs about 2-1/2 pounds. It has very broad wings, and is mainly black. The short tail is white with a broad black tip. The bill is black and the legs are yellow. The sexes are similar.

During a snowstorm on January 20, the bird was discovered laying on the ground in Deering Oaks Park. It was transported to Avian Haven, in Freedom, a reputable bird rehabilitation facility. Initially, it was feared the bird would probably lose a toe on one of its feet due to frostbite.

Diagnostic testing that included infrared thermology and doppler ultrasound indicated no blood circulation to the feet and lower legs. Additional examination revealed that both feet were discolored and showing signs of severe decomposition.

The folks at Avian Haven explored various alternatives to save the bird. They discussed the possibility of fitting the bird with prosthetics, and keeping it in a controlled setting. It was decided the bird probably would not adapt to two artificial legs that would need occasional adjustments, and that the bird probably would not do well in captivity. In the wild, they are used to perching, grasping food with its talons, or landing successfully following flight.

Despite having remained somewhat active with a good appetite, the bird was observed laying on its side, and not eating as it had. It was then decided the bird could not be saved, and was euthanized on January 31. That, it must be noted, was not an easy decision for the staff at Avian Haven, nor the professionals that were consulted during the process.

Of course, the question on everyone’s mind was why this bird had found its way to Maine. Only one other great black hawk had ever been sighted in the United States. Many species wander about. That is nature’s way to encourage species to expand their range. Animals with too small a territory are prone to extinction, especially in the event of a catastrophe like a major storm, epidemic or even an oil spill. But the great black hawk is not known to wander. Wanderers are called vagrants. It has always been said the great black hawk never, ever, leaves its tropical home. Unfortunately for it, this one did.

However, some individual birds seem to have a cerebral malfunction that causes their navigational system to go a wry. Could the unseasonable extreme warm weather we had last summer give a tropical bird the sense that the rest of the world is like the tropics?

Who knows what drew that bird to our area, only to meet with an unfortunate ending.

Also, do you remember what Woodrow Charles’ prediction was for the Super Bowl? “Pats by 10,” was his forecast. Final score, New England 13, Los Angeles 3.

New England Patriots Julian Edelman was named MVP in Super Bowl LIII. Who was the last wide receiver to win that award?

Roland’s Trivia Question for Thursday, February 7, 2019 FOR YOUR HEALTH: Cold, painful fingers can mean a serious disease
Scroll to top