Received the following e-mail from the Solon School News: We want to extend our best wishes and good luck to our fifth grade students who will enter sixth grade at Carrabec Community School in the fall.

Solon students participated again this year in the annual Bookmark Contest in conjunction with the Coolidge Public Library. Each student designed a bookmark with a theme that promoted reading. Town librarian Megan Myers and art teacher Richard Reichenbach judged the contest and picked a winner from each class. These students each received a book from the library, and their bookmarks were duplicated to hand out to patrons at the library.

Congratulations for reading all of those books!

Received the following e-mail from Somerset Woods Trustees of Skowhegan: We have declared June 30 as Mountain Biking Day at Coburn Woods. The town of Skowhegan, Somerset Woods Trustees, the Somerset Trails Committee, and the Central Maine New England Mountain Bike Association have teamed up for a great morning of mountain biking. Bring your own bike and helmet or borrow (ages 10-adult) from them from the town. Bikes will be on site to borrow. Tours of the trails will be lead by experienced bikers. Again, thanks so much for sharing, sounds like a fun day.

Lief and I started out for Dave and Eleanor’s camp up to Flagstaff, where they were staying for a few days. Mark and Karen and Peter and Sherry were also staying the night. As always, there was perfect peace and quiet up in God’s country.

We had seen one beautiful doe on our ride up, which was great! We had intended to spend the night also, but something came up, so after a scrumptious supper we started back to Solon. When we left camp the sky was threatening rain and the bank of the road is very close to Flagstaff Lake, so we wanted to get out closer to civilization before darkness over took us.

We did get out to the main road when all of the miracles started to happen! The first wildlife was a fox that ran across the road in front of us. Soon after that, it started to rain lightly, and we couldn’t help exclaiming when a moose appeared in the road just up ahead of us, soon followed, by the tiniest baby moose. I got out of the car and took a few pictures, but not wanting to get wet or ruin my camera, I doubt that they will be very good.

By the time we had calmed down it had started to pour and darkness had overtaken us. Usually when we are up in that country we don’t see quite that much wildlife, it was a joy. But we decided, since the weather was definitely getting really rough we started out once more. We had traveled several miles, when to our wondering eyes, what should emerge from the bushes but a deer followed by her two babies!

Forgot to mention that when we left camp, to head home, an eagle was soaring over us, and miracles do happen!

Now for a quick one from Percy…..Life is what we make it, always has been, always will be. (words by Grandma Moses.)

Bikes for Books T-shirts were awarded to the top three readers of each grade at Windsor Elementary School. (Contributed photo)

On June 6, Windsor Elementary celebrated reading at its seventh annual Bikes for Books awards program. Bikes and helmets were awarded to twenty students at this assembly. Bikes for Books is a reading incentive program for students from Pre-Kindergarten through Eighth grade. Every time a student read a book and passed an Accelerated Reader test, his or her name was entered into a drawing to win a new bicycle and helmet. The more books a student read, the more chances he or she had to win. One boy and one girl were randomly chosen from each grade level. Bikes for Books T-shirts were also presented to the top three readers in each grade.

Magazines. I love them! In my world some are for reading, like “Reminisce” (I even had a little Christmas story in one issue), “Good Old Days” and “Reader’s Digest.” There are more but I can’t think of them right now.

Some magazines I buy like “Woman’s World” and “First” for reading and cutting up. I give some of the cut ups to friends when it is a subject I know they are interested in. Sometimes the magazine articles give me ideas to add to my writing.

There are some cooking magazines that I find in thrift stores and I save them for my granddaughter. She seems to be the cook in our family. It sure isn’t me! Those recipes always require odd spices and such; too many steps to complete for me to be interested.

There are wonderful magazines like “Farmer’s Almanac” and the other almanacs. I thought forever that they were only weather and gardening information so I never even looked at one. Imagine my surprise when I discovered the terrific articles they print. I have used them as great resource materials!

Kid’s magazines have even given me ideas to write about for these columns.

I have a great time going through “Flea Market,” “Cottage Decorating,” “You Can Make It,” “Better Homes and Gardens” and “Good Housekeeping.” These magazines I really cut up, I pull out pages that have some part that I would like to remake to my own ideas.

Catalogs I pull apart for clothing ideas. I like to copy ideas for jewelry, too. I saw a bracelet made out of old watches that I loved but not $150 worth of love. It gave me a great idea to make my own. I even added a working watch to it. I bought some watches at thrift stores and made my own bracelet/watch for under $20. It was fun and SO satisfying.

My Dad used to have a trash and treasures shop and he was forever bringing home odd things. Once when I was up from Florida visiting, Dad had brought home some old magazines I really enjoyed. They were ‘50s and maybe some early ‘60s “Ladies Home Journal” and “Good Housekeeping.” I would love to have them now. I found them to be hysterical that night. I don’t know what happened to them but I would love to be able to sit with them again! If you know where there are any, please let me know. I promise I won’t cut or tear anything. I would make copies of the things of interest to me. You can call me at 948-4231. I will tell Ken that I am hoping for some phone calls so he won’t give you his ‘grumpy’ voice!

To finish this tonight I found a few more T-shirt sayings I wanted to add to last week’s list of ‘greats’!

When I get tired of shopping I sit down and try on shoes.

Some days my life is just a tent away from a circus.

I call my fashion style “Clothes that still fit”!

I’m just curious what you like to read. Contact me with any questions or comments at dwdaffy@yahoo.com. Thanks for reading! Don’t forget, we are on line, we even have archives. 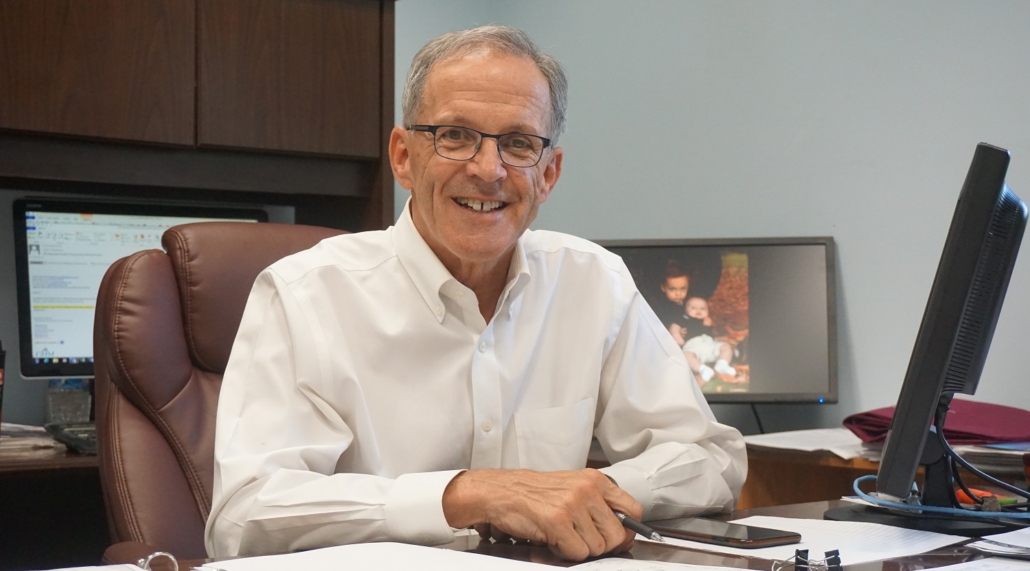 Retiring China Town Manager Dan L’Heureux poses for a portrait at his desk at the China Town Office. His retirement became official on July 1, 2018. (Photo by Eric Austin)

When Dan L’Heureux was hired at the start of 1996, the China Select Board had two primary goals for the new town manager. First, they were looking to foster more economic development in the town. Second, they wanted someone who could achieve a stable mil (tax) rate that could be maintained even during tough economic times.

Based on just these two criteria, Dan’s tenure as town manager has been a huge success.

“If you plan long-term, and you work that plan, you can’t go wrong,” Dan told me when I asked him the secret to his success. “You plan for the bad times during the good times.”

This philosophy is apparent in every decision he’s made as town manager. Whether it’s the establishment of the TIF (tax increment financing) fund that will finance more than eight million dollars in economic development over its 30-year lifespan, or the purchase of snow plows that might cost more upfront but will save the town money in the long-run, Dan’s always thinking long-term.

The result is a town that’s in better shape than perhaps any time in its history. With no debt, capital assets that are in good shape, and a surplus that will see the town through any unforeseen emergencies, Dan is leaving the town in an enviable position for his successor.

“Dan knows finances,” Selectman Irene Belanger told me. But Dan’s financial savvy isn’t the only reason he is so beloved in the town of China. “Dan is compassionate,” Irene also said.

Recently retired selectman Joann Austin explained further. “He takes all that stuff that gets thrown at the town office, at the town government,” she said, “and he responds and listens, but he doesn’t react. He’s warm and he listens. He’s really quite heroic.”

Perhaps part of it is Dan’s humility. He defines his role as town manager as a supportive one. “The Select Board steers the ship,” he told me. “As managers, we provide the support. We do the research – meticulous and comprehensive research – that allows them to make the best decisions for the town.”

And he isn’t shy about spreading the credit around. “The Select Board and budget committees have been excellent stewards,” he said. “And you can accomplish a lot with good employees. Ours are superior!”

Finding just one thing that defines Dan’s legacy as town manager is not easy. One could point to the transfer station. A well-oiled machine and the envy of neighboring towns, China’s transfer station has maintained a nearly flat budget over the years despite numerous improvements and additions.

One could point to the many ways Dan has saved the town money. His talent in applying for grants has saved residents more than a million dollars over the last two decades. Those grants have funded everything from the building of the salt/sand shed and recycling center at the transfer station, to the sidewalk project in South China; the restoration of the historic one-room schoolhouse in Weeks Mills, to the tree cleanup after the 1998 ice storm. Dan knows how to get more done with less.

At Dan’s final selectmen’s meeting on June 25, Neil Farrington invited him to offer a few words. In response, Dan related how he’d had four criteria when considering whether to take the town manager’s position back in 1996: he was looking for a job that had the support of his family; he wanted to like the work he would be doing; he hoped to find a team he’d enjoy working with (and hopefully would like him in return); and finally, he wanted to like the people he was working for (the Select Board and the residents of the Town of China). His job as China town manager, he said, had fulfilled all four of those criteria. The past 22 years had been exceptionally rewarding for him, and he hoped that feeling was mutual.

On Saturday, June 30, the China Select Board presented Dan with a Spirit of America award for his more than two decades of service to the town.

What’s up next for the new retiree? “People say you shouldn’t make any decisions for six months after you retire,” he responds with a laugh.

Although he now lives in Waterville, wherever life takes him next, Dan L’Heureux will always find a home in the Town of China, Maine.

Eric W. Austin lives in China, Maine. He writes about technology and community issues and can be contacted by email at ericwaustin@gmail.com.