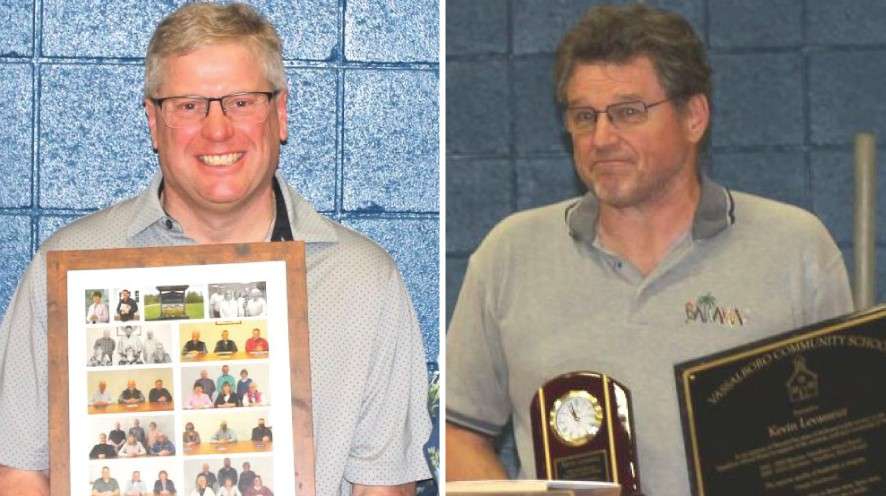 VASSALBORO, ME — Vassalboro voters chose Richard Thompson to moderate their annual town meeting Monday evening, June 6, for more than the dozenth time, Thompson said. But for the first half hour after his election, his role was more master of ceremonies.

First, Thompson introduced School Superintendent Alan Pfeiffer, who was joined by school board members in recognizing Kevin Levasseur, retiring this year after 21 years on the board.

Pfeiffer commended Levasseur for his long and helpful service, especially as board chairman during the last two unusually difficult years. Board members presented him with a plaque from the school staff, parents and community.

Levasseur has been on the town school board under four superintendents: Elaine Miller, Hugh Riordan, Eric Haley and Pfeiffer.

State Representative Richard Bradstreet, of Vassalboro, presented a legislative sentiment – not an official one, he explained, because to earn an official one requires 20 years’ service and Browne just missed, so Bradstreet made up his own.

Titus praised Browne for the smoothness of the relationships on the board over the years, commenting that disagreements were amicable and mutually respectful, and for his generosity to residents in need. He drew chuckles from the audience with comments on Browne’s well-known positions, like his aversion to town debt.

Browne’s reply commending townspeople for their willingness to work out local problems and for their volunteerism brought a standing ovation.

After the ceremonies, the 100 or so voters attending the meeting in the Vassalboro Community School gymnasium settled to business and quickly approved the 39 articles before them. Three were amended.

Select board members and Town Manager Mary Sabins had agreed before the meeting to reallocate sources of funds in two articles, because the fire truck reserve and the plow truck reserve funds have lost money in the market. The changes had no effect on proposed spending or on 2022-23 taxation.

Resident Holly Weidner proposed increasing the allocation for the China Region Lakes Alliance (CRLA) from the $9,000 recommended by the select board and budget committee to the $11,500 requested. The additional money would help fund additional lake protection services from the organization, she said.

Voters approved the amendment by a vote of 41 in favor to 27 opposed.

Budget committee members Bradstreet, Doug Phillips, Mike Poulin and Frank Richards were re-elected, and Nate Gray was elected to fill the seat being vacated by Rick Denico, Jr., who is an unopposed candidate for the select board in local elections.

The meeting recessed a little before 8:30 p.m. until 8 a.m. Tuesday, June 14, when polls will open in the town office for written ballot voting, including a second vote on the $8.7 million school budget approved June 6; a straw poll asking if voters want the select board to draft a new ordinance to regulate the number and locations of solar arrays in town and their decommissioning; local elections (uncontested); and state primary elections (also uncontested).