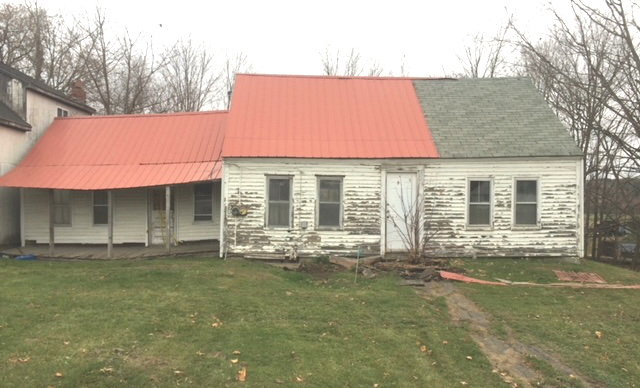 The dilapidated house that was razed. (photo contributed courtesy of Barbara Bailey)

Although it is not the first in its 146 years of existence, it is probably one of the most visibly noticeable.

Victor Grange has taken on another challenge. Although it is not the first in its 146 years of existence, it is probably one of the most visibly noticeable. As people drive through the Fairfield Center area they will notice that the house next to the Grange has been demolished. The house had been in a state of disrepair for many years and needed to be torn down. After a long battle and lots of negotiations with many parties, this has finally been accomplished. 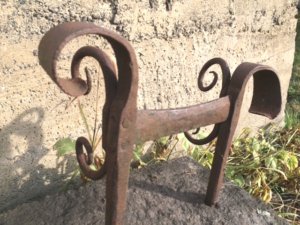 The boot scraper that was located at the front door of the house above. (photo contributed courtesy of Barbara Bailey)

In 2015 the house was taken by the bank in foreclosure after the owner passed away. The lack of size for the land and setback restrictions from both the stream and road limited its potential. The bank put it up for auction twice but it never sold.

This area is a busy part of the Fairfield Center, and the house was located in the same block as the Volunteer Fire Dept., two businesses, and The Victor Grange – all quite active. With the need for parking in the area and restrictions on this lot, it was suggested that the bank turn the property over to the town to be demolished and used as a parking area/green space. The town received the property in December of 2016.

After three-and-a-half years of the house continuing to deteriorate, no action by the town, and no money in the budget to proceed, Victor Grange proposed that the town turn the property over to them. They too wanted to create parking and green space but felt with the help of the community and Friends of the Grange they could accomplish it faster. 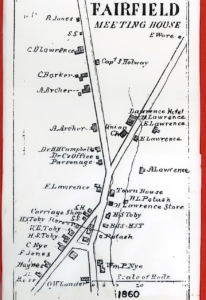 Map of what is now Fairfield Center in 1860. Here, the intersection with Rte. 139, Fairfield St. and Ohio Hill Rd. (photo contributed courtesy of Barbara Bailey)

Though the demolition was inevitable, it is important to recognize that this area has such a rich history. Through research, it was established that in 1860 the house belonged to H.S. Toby, the local blacksmith; this was evident with the front step which consisted of a large piece of granite with an elaborate boot scraper embedded in the stone. This stone has been moved to the Grange until permanent placement, possibly in the new green space.

The surrounding area also has an interesting history. Through deeds, hand-drawn plans, and receipts in the Victor Grange records we know of purchases of the store, the schoolhouse, and the conversion of the Grange Store to the ell of the present hall.

On the 1860 map, this area was known as “Fairfield”, not Fairfield Center as it is now. It was a bustling village made up of the Town Meeting House (where all town business was conducted), church, parsonage, one-room schoolhouse, hotel, two stores, doctor’s office, blacksmith, carriage, tanner, and sleigh shops. 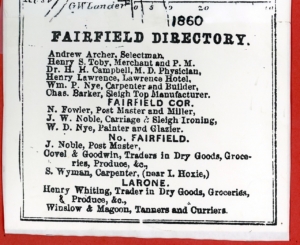 The legend of the business owners at the time for the 1860 map above. (photo contributed courtesy of Barbara Bailey)

From 1874 to 1899 Grange rented the “Old Town Meeting House” for their meetings until the current hall was built. In 1878 The Grange purchased one of the village stores to run as a Grange Co-Op, where members could purchase supplies at bulk pricing. When renting the Town Meeting House was no longer an option, the decision was made to build a new hall. At that time, the Grange Co-op/store was rotated 90 degrees and attached to the new hall, for use as the entrance/foyer, stairways, kitchen, bathrooms, coat and junior rooms

In the 1960s the state removed the old dam and fire pond and rerouted the Norridgewock Road thus making many new changes to the layout of the land in Fairfield Center. This meant the water from the pond was redirected behind the Grange and the house next door, each losing land to the new state road.

COMMUNITY COMMENTARY: Is our country ready to round the corner on race rela... Give Us Your Best Shot! for Thursday, December 10, 2020
Scroll to top