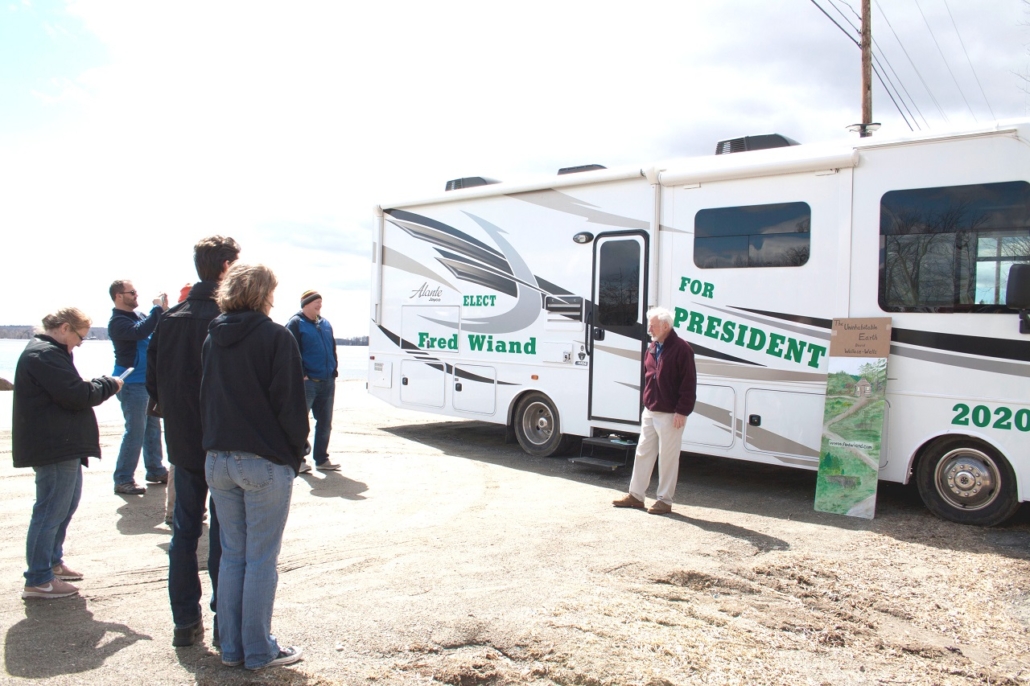 Democratic presidential candidate, and China resident, Fred Wiand received a send off by supporters at The Head of China Lake, on Saturday, April 6. (Photo by Sandy Isaac)

A group of supporters gathered at the north end of China Lake for the launch of Fred Wiand’s “Running for You” campaign tour. Fred, a resident, of China, Maine, seeks the Democratic nomination for the 2020 presidential election.

He emerged from his white recreational vehicle shortly before 1 p.m. to meet and greet the group who came to hear him speak. His RV will act as a mobile campaign office and home for the next few months.

Wiand, a retired Air Force Major, served for over 20 years active duty and was stationed in over 13 countries. He has visited all 50 states and lived in many of them, including Pennsylvania, California, Texas, New Hampshire and Maine.

He said he has been (physically) running since the ‘60s which makes him fit for the job. This was also the inspiration for calling his campaign “Running for You” and at this rate, he has no thoughts of slowing down.

After greeting the supporters Wiand stated, “I may be the dark horse, but I see a path.” He then explained that he does not plan on taking any PAC money to help fund his campaign.

PACs (Political Action Committees) allows corporations or organizations to bundle contributions from their members and channel that money to fund elections of our government officials. This is the fastest way for a candidate to raise the cash needed to run a successful campaign.

When asked if this puts him at a disadvantage, he said, “No, a huge advantage actually. Other candidates will be beholden to those who contribute to their campaign.” He promised to address campaign finance reform once elected.

Wiand went on to speak about some of the issues that he would tackle as president, like universal healthcare, gender equality and gun safety. Two of the biggest topics he elaborated on were global warming/climate change and immigration. He said, “[We] should rejoin the Paris Climate Agreement,” and spoke of looking for alternative energy sources. Solar energy, wave/tidal/ocean options, geothermal, hydroelectric and hydrogen were all areas he felt we should explore more.

Immigration is also an important topic to Wiand. He started by expressing concern for all of those fleeing other countries and “escaping with their lives.”

Wiand mapped out a plan involving working with the Mexican President to ensure a safe and secure travel route for those who wish to come and go from the United States. His plans involve creating stop-over camp sites along the refugee routes in Mexico. He then spoke of villages being built with American and Mexican labor between camp sites, establishing employment opportunities, and all the benefits that a village infrastructure would have. A similar setup could occur on the U.S. side in areas like El Centro, California, and Del Rio, Texas, just to name a few.

He went on to say that electronic surveillance would be put into place instead of a solid wall and that every vehicle must be searched for contraband, no matter how long that inspection would take at designated secure crossings.

Wiand also spoke about gun safety. He mentioned that he was a gun owner, but that military guns should be used only by the military and that better background checks were necessary. He would like to see a universal gun law in place.

The “Running for You” campaign tour will take Wiand first to Massachusetts for a speech before heading south along the coast for stops in New York. Next up will be Pennsylvania to speak at Valley Forge and Gettysburg, then south to Florida.

When asked if he had anyone in mind to be a running mate, he said, “No, not yet. They would have to be like minded politically of course, but I would look for someone to add diversity to the office.”

Wiand was then asked about his negotiating style or philosophy. He said, “You have to be open to friendly negotiations. No bullying. You have to have vision, charisma, persistence and resolve.” For example, he mentioned how President John F. Kennedy said we would have a man on the moon, and although there was push back, he made it happen.

He went on to say that he hoped Democratic voters would not become divided by a third party, stating that “I will support whoever the Democratic National Committee chooses to be their next candidate. I just hope that it will be me.”

To read more about Fred and his philosophies, please visit his website, www.fredwiand.com.

ERIC’S TECH TALK: The 5G future and the fight with China Renaissance awards at Erskine
Scroll to top