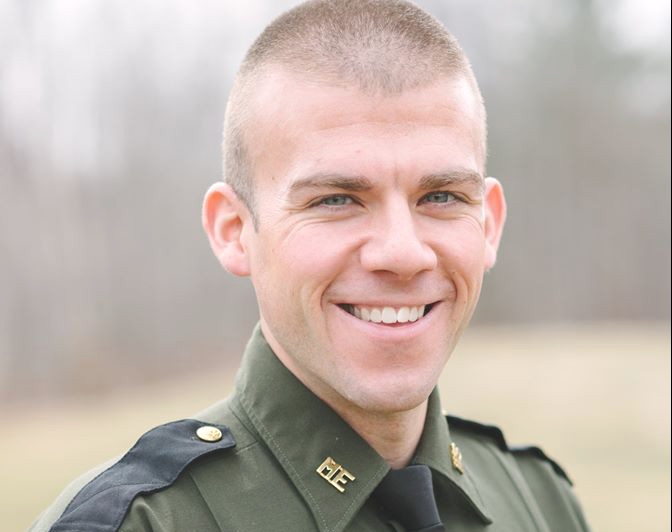 “The youth – they’re not out there. It’s my age and up,” says Ross, who is in his mid-30s. “Whether that’s parents not passing down traditions, or kids not wanting to be outdoors – too many distractions? – I don’t know what the answer is.”

Traditional pastimes like hunting, fishing and trapping in particular have seen a slow decline in recent years. That’s a problem because much of the funding for Maine’s conservation efforts comes from the sale of licenses for those activities.

On the other hand, extreme vehicle sports, including snowmobiling and riding ATVs, are increasing.

Ross, a native Mainer who grew up in the Wiscasset area and went to Unity College, spent three years as a Maine Marine Patrol Officer before moving to the warden service ten years ago. In 2012, Ross and his wife, who works for Maine’s Attorney General office, relocated to China. They have two children, six and four, who attend St. Michael’s parochial school, in Augusta. As a game warden, Ross serves six towns around central Maine: China, Windsor, Palermo, Liberty, Montville, and Freedom. His territory also includes the lakes of China, Sheepscot, and St. George.

Although Maine game wardens are law enforcement officers with the power to arrest, investigate and enforce the law, Ross sees his job as different than the typical police officer.

“[On] the direct law enforcement side, they’re primarily reactive. They get a call and they go,” he says. “I’m a pro-active law enforcement officer. I like to prevent things from happening.”

Many of the calls Ross receives are a response to residents’ interactions with local wildlife, but sometimes people panic for no reason. “Seeing a fox during the day – that’s not a big deal,” Ross advises. “You’re looking for the behavior. If you see a fox during the day that’s running in circles, chasing its tail, falling over for no reason, running into trees – aggressively attacking you – that’s cause for alarm. But seeing a fluffy-tailed fox siting on a rock, sunning itself – not a problem. That’s wildlife in Maine.”

Still, if you ever have a question, Ross is easy enough to contact. Just call the state police non-emergency dispatch at 624-7076 and ask for Warden Dave Ross. He’ll call you right back.

Ticks are also a growing problem in Maine and they are having a detrimental effect on residents’ ability to take advantage of the state’s best asset – the Great Outdoors.

“I’ve talked to a few hunters [about] turkey season in the spring,” Ross says. “They’re not going to go, just because of the ticks.”

The milder winters we’ve had the last few years have been a boon to the tick population. Usually, Maine’s harsh winter cold is enough to kill off the ticks each year, forcing them to reestablish their population the following spring, but as the climate warms, that’s not happening, which means we can expect ticks to become a worsening danger in the years to come. On the plus side, the milder winters mean we’re seeing other animal species expand their range into central Maine, such as opossums, which feed on ticks.

Ross deals with the tick menace by treating his clothes with Permethrin before venturing out into the woods.

When he’s not roaming the woods of central Maine looking for poachers or lost hunters, Dave Ross is at home on his hobby-farm in China where he raises chickens, pigs and tends bees.