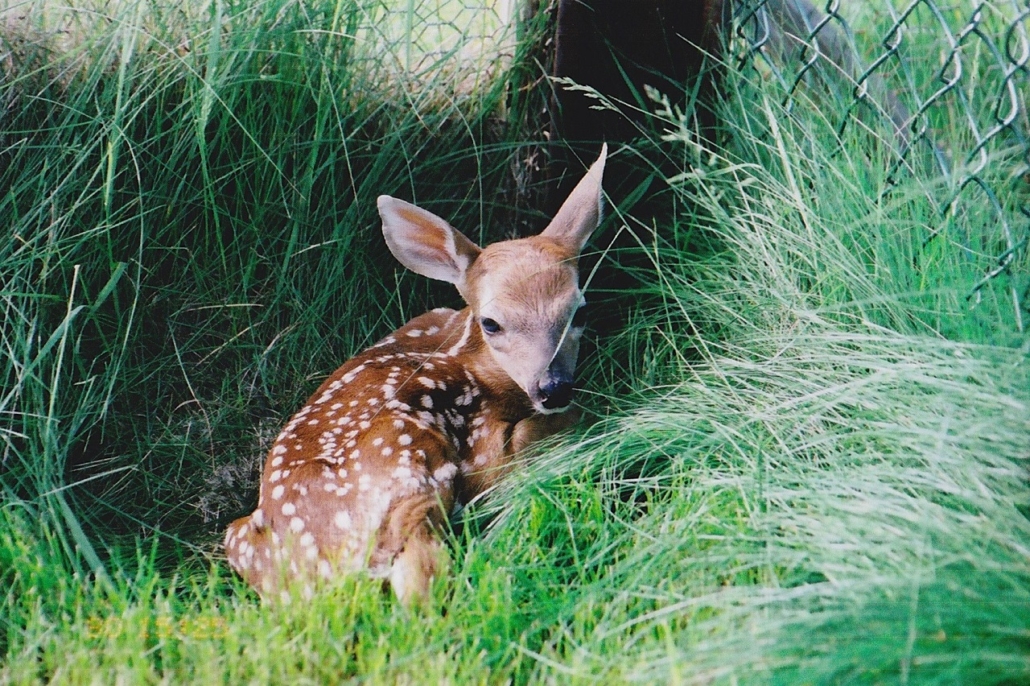 A fawn at the Duck Pond Wildlife Center. (photo by Jayne Winters)

Although spring always brings admissions of injured, sick and newly-orphaned wildlife to the Wildlife Care Center, May and June are also the months that find Don and his volunteers releasing rehabbed critters back to the fields and woods where they belong. The animals have depended upon human assistance to regain their health or simply mature to an age where they can face the world on their own. Release sites are selected in advance and must meet Don’s criteria: a good distance from houses and highways and readily available water sources.

Seven of nine deer have been successfully released, all together in one area. Assistants with a couple of blankets – and nets on hand if necessary – helped Don herd them toward the transport trailer and seven happened to run in as a group. Don returned home to get the remaining buck who readily entered the trailer, but was unwilling to leave it at the release site. Not wanting to stress it any further, Don left the trailer door open and upon returning a couple hours later, found the deer had come out but was lying on the ground, apparently unable to get up. Sadly, the buck had to be euthanized, likely due to an unknown injury. One more deer remains to be captured and released.

The three bobcat kittens, now a little over a year old, will be released next week individually and at different locations. Despite eating well and thriving last summer, they were too small to survive on their own in the fall, so were kept over the winter and are now ready to venture out into their natural habitat. Although somewhat accustomed to human interaction, the kittens have maintained their defensive characteristics and continue to be cautious. It shouldn’t take them long to adapt to life away from the Care Center. The female weighs about 20 pounds while her two brothers are a little heavier at probably 25 Pounds. They’re lean, mean fighting machines!

Two opossums and two flying squirrels have also been released, all in one area. This was an unusual year for flying squirrels as there were only two admissions, not the usual 40-50. Of course, there are many months ahead of us! The three remaining foxes will be released within the next couple of weeks. All raccoons have been transferred to another rehabber, so the focus will be on the expected summer and fall admissions.

The day I was visiting with Don, he asked if I had my camera – he had a young weasel in the incubator, so of course, I had to get some photos! It’s being fed formula several times a day and is probably only a couple of weeks old as its eyes aren’t open yet. When I returned later in the afternoon, four 1-2 days-old mice or rats (so small it’s hard to be sure) had been admitted. Never a dull moment at the Wildlife Care Center.

Don continues to keep admissions and long-term residents at a limited number by transferring many rescued critters to other rehabbers who have generously offered to assist in their care. Please check these websites to see if there is a rehabber closer to you to help keep critter care at Duck Pond more manageable: https://www.mainevetmed.org/wildlife-rehabilitation or https://www.maine.gov/ifw/fish-wildlife/wildlife/living-with-wildlife/orphaned-injured-wildlife/index.html.

– Donald Cote operates Duck Pond Wildlife Care Center on Rte. 3 in Vassalboro. It is a non-profit state permitted rehab facility supported by his own resources & outside donations. Mailing address: 1787 North Belfast Ave., Vassalboro ME 04989 TEL: (207) 445-4326. PLEASE NOTE THE PRIOR wildlifecarecenter EMAIL ADDRESS IS NOT BEING MONITORED AT THIS TIME.