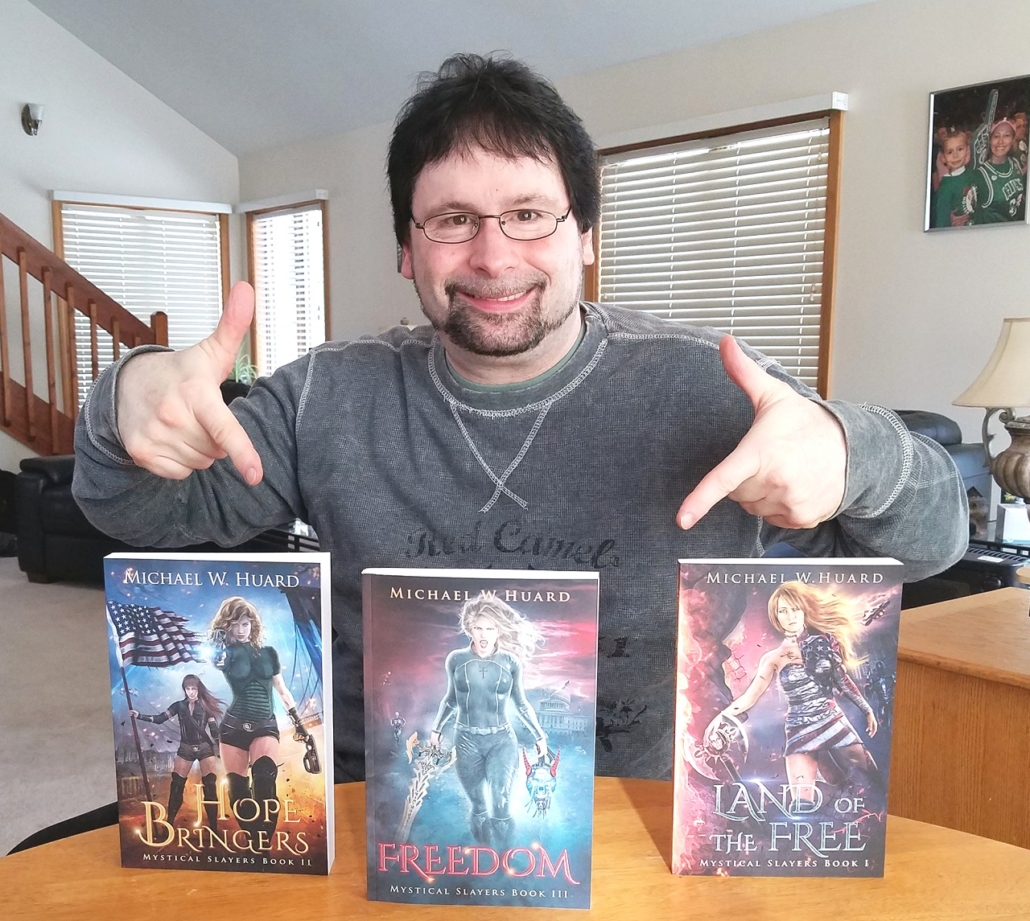 Michael Huard, of Fairfield, displays his new Sci-Fi and Fantasy series, which includes three full books, Land of the Free, Hope Bringers, and Freedom, that takes the reader into the far future, the 31st century, and it’s not a pretty one. (photo by Mark Huard)

My brother has been busy writing over the past couple of years and has released his book series.

Michael W. Huard’s new Sci-Fi & Fantasy series, which includes three full books; Land of the Free, Hope Bringers, and Freedom, takes the reader into the far future, the 31st century, and it’s not a pretty one.

I asked him what the storyline was about and he simply said that he wants readers to envision a sisterhood of Wonder Woman-like martial arts masters in the real world; now throw in the Terminator and a Hunger Games-like mentality and setting, and there you have the Mystical Slayers layout.

This got me wondering, what does he think the world will look like one thousand years from now? He went on to say he hopes it’s a beautiful place, with peace and good will to man.

However, in the books there’s war, greed, tyranny, and through the aspect of advanced technology and robotics, humans are all messed up and fighting to survive and find a healthy environment to live in. The country is torn into pieces of its former self. He said even today mankind is lost in their computers, the digital devices we have our faces in constantly. These are little robots, and in the series these robots grow bigger.

So how do this sisterhood he writes about play a role in all of it? The author was all smiles when telling me they are freedom fighters in the modern world. They believe in liberty and justice, patriotism and truly want the world and in specific, the United States of America to be whole again.

The books are available exclusively on Amazon, and from what I have seen, getting some good reviews.

He also told me that writing for him is very therapeutic and he really enjoys putting words on paper. He seems to be a guy who loves to tell stories and I found myself wondering what advice he would have for other aspiring authors. As for a reply, he said, “If the words come out easily for you, get them on paper, you can fine tune later.”

Michael is also a martial arts instructor and when you read his works you get the feeling his combative fight scenes are pretty true to such knowledge. The women do some serious butt kicking!

I was suddenly debating where his love of storytelling had come from. He explained that reading is the great escape. He loves traveling all over the galaxy in books. Stories like the Hobbit and Lord of the Rings, a/k/a Tolkien’s works were his biggest push in such direction. “I’ve also been a Dungeons & Dragons game master for over 30 years for a long time group of fantasy role players; this led my wife to tell me that I should really get my tales on paper.”

The word is out he’s working on a new series and I wanted to get a feel for what’s coming up in the future. The author’s eyes lit up as he went over what’s to come. “I’ve just begun a new series of Gothic Fairy Tales, and it’s going very well.” I took a peak on his author bookshelf and he’s writing about witches and vampires, Snow White and Little Red Riding Hood.

He then let the cat out of the bag by saying that he was actually working on a sort of retelling of the classic Bram Stoker’s Dracula novel. He said, however, it’s very different in many ways because the story is about a brother. I think we can all look for that book in the future.

I then had to ask him, seeing how he seems to be pretty busy, “What’s a typical working day like for you, when and where do you write, and do you set a daily writing goal?”

He went over such, “I get up and do all my writing in the morning and early afternoon. Some days I write a lot, some days nothing at all. As a writer you often end up doing everything from, editing, formatting, and marketing to promotional stuff daily. There’s days when no writing gets done and then there’s days when I do sprints, which are blasts of tons of writing and often 5k words get written.”

The last thing we spoke about was to what he thought made books so special. He explained that reading is the great adventure. It can take you all over the world or to new worlds, its relaxing and a good book is a great treasure indeed.

To check out the author’s works, head on over to Amazon and or visit his page Michael W Huard on Facebook.

I’M JUST CURIOUS: Which is it, boy or girl? CHINA: Comprehensive plan meeting at Erskine
Scroll to top