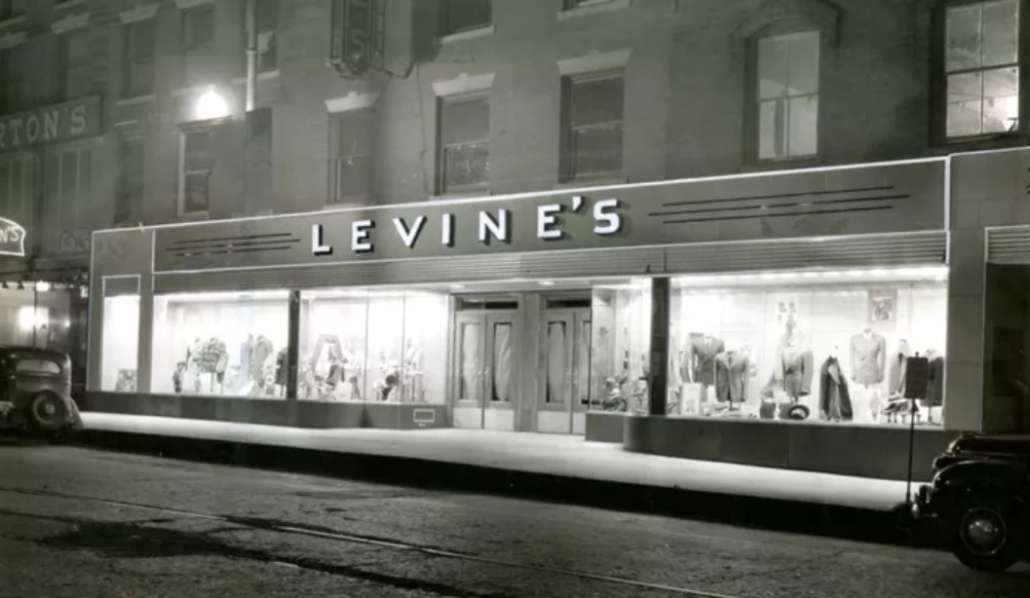 This is the beginning of a series of articles on growing up on The Plains, in Waterville, in the 1950s and 1960s. The Plains was a flat area along the Kennebec River that stretched from the end of lower Main St., south toward Grove St., and slightly beyond to Couture softball field. I was born into a French-Canadian Catholic family, in the south end of Waterville.

But, before we get into that, there was one significant chapter in my growing up that must be acknowledged.

Just north of The Plains, at the most southern end of Main St., stood an iconic landmark known, pretty much, nationwide – The Levine’s Store for Men and Boys.

In my growing up years, there wasn’t a stitch of clothing I owned that did not come from Levine’s. Back in those days, there was no Walmart, Kohl’s or Target. When you needed clothing, you went to the local haberdashery, picked out your item, had them fitted, and tailored to your size and specifications, at no extra charge.

One of the main reasons we went to Levine’s – there were other clothing stores, Stern’s Department Store, and Dunham’s of Maine to name a couple – but for our family, it was Levine’s.

My mother’s youngest brother, Leonel “Nel” Libby was a sales clerk at the store, and he was our go-to-guy. Anytime, anyone in our family walked through the front door, we were not approached by other sales clerks, but they would go looking for “Uncle Nel” – You could hear them yelling for “Libby” throughout the store.

I remember when I was about 10 years old, my father took me to Levine’s to buy my first suit. Actually, it was more like a sports jacket. It was a red checkered coat that was worn with black pants. Boy, did I feel like I was the cat’s meow with that snappy jacket. Even took it on trips to Canada.

Levine’s had the latest fashions.

During my sophomore year in high school, I was finally able to buy my own clothes after I got a job working in the mailroom at the Morning Sentinel. The rage at the time were khaki “chinos”. That was something my mother would not buy for us. We always wore corduroy or flannel pants.

How proud I was of those chinos. I now looked like one of the guys in school. Even the girls noticed.

Until the day came when they went into the laundry. Before I go any further, you have to understand my mother was a very meticulous person. Never any dust on the furniture, floors that shined all the time, and laundry that was ironed perfectly before being put away.

The style for wearing chinos back then was more like boot cut jeans of today. No creases. Well, my mother went and ironed them, putting a clean, crisp pleat in the legs. Destroyed! I couldn’t wear those to school again. Even though they came from Levine’s.

Levine’s store, founded in 1891, has been closed since 1996, as have the other two stores. Even my Uncle Nel has passed on. Something is definitely missing downtown.

So, descendants of William Levine, founder, and his sons Lewis “Ludy” and Percy “Pacy”, have come together to remember the store and its location in Waterville. After moving the store to its most recent location on lower Main St., early in the 20th century, the store expanded in the 1960s to the former site of the Crescent Hotel, which was located on the traffic circle that existed in the middle of Main St., Water St., Spring St., and Bridge St.

Levine’s Store for Men and Boys served as a beacon of business development and community gathering in downtown Waterville for 105 years. After closing its doors in 1996 the building lay dormant until it was razed. location is now the site of the newly-built Lockwood Hotel, which is owned by Colby College. Levine’s was internationally known. Colby students and satisfied customers spread word across the globe about Levine’s. Thus, Levine’s Store is inescapably tied to Colby College in putting Waterville on the international map.”

Descendants of the Levine family have created a fundraiser to preserve the family’s legacy with a plaque to be erected in the southern park.

The GoFundMe organizer says: “It is time to memorialize and honor the legacy of Levine’s Store and the memories of Ludy, Pacy, and their nephew Howard Miller. In partnership with the Mayor of the City of Waterville and with Colby College, the descendants of Ludy, Pacy and Howard have banded together to honor the store and the Levine family with parks on both sides of the hotel, and with a special naming of the hotel’s conference room. An exceptional dedication ceremony is currently being planned for mid-July 2022. Colby College is funding the development of the memorials that will live in the northern park and in the conference room. It is the family’s responsibility to fund the memorial for the southern park.”