Obsolete was one of many poems written by the late Ruth Kenoyer Polley, this one probably a year or so before her death in the fall of 2016 at the age of 96. 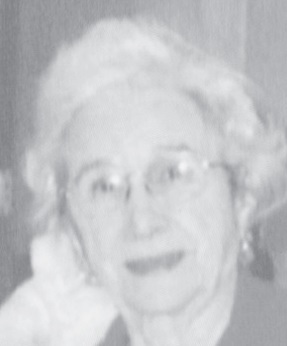 Ruth was one of four daughters and six sons of Annie Berry, a Maine native and William Penn College graduate who became a schoolteacher in South Dakota and Iowa and married a handsome cowboy and jack-of-many-trades named Henry Kenoyer. Annie’s mother, Susan Jones, was a Quaker minister in South China. She considered small-town Iowa not the best place to bring up children and the gunpowder factory where Henry had a job in the 1920s a dangerous workplace, so she promised to fix up a brick house in South China for the family to move into.

In late August and early September 1928, as Ruth told the story to her niece Patricia Probert Gott (daughter of Ruth’s older sister Alice), the Kenoyers piled their belongings into a Model A truck and a Dodge touring car – Patricia’s 2010 book, Eastward Bound, has photos of the vehicles. They drove from Iowa to Maine in 10 days, a trip Ruth’s surviving sister, Helen Kenoyer Mosher, of South China, remembers as uneventful. They brought a stove with them to cook meals, she says, and camped overnight.

After a year or so on Jones Road, in South China, the Kenoyer family moved to Choate Road, in Windsor. In addition to the 10 Kenoyer children, Helen’s son Dick Mosher says, they took in a cousin named Charles Sisson, referred to as the brother-cousin.

Dick Mosher says Charles Sisson now lives in Texas with his second wife, Stella. The two dated in high school, then took different paths, and she became Stella Farrington. After both lost their respective spouses, they reunited and married.

Annie Kenoyer taught school in Windsor and on the Cross Hill Road, in Vassalboro, and retired from the East Vassalboro School. In 1953 she was named Maine Mother of the Year, Helen says proudly.

The 10 children attended Erskine Academy, in South China, and most of them went on to further education. Some became teachers like their mother; Winfred Kenoyer was a school principal, in Mexico, Maine, and then headmaster of Erskine Academy. One joined the FBI. Others went into construction, business, the ministry or nursing. Most served in World War II; Russell, who enlisted during his freshman year at the University of Maine and became a fighter pilot, was shot down over Germany only weeks before the war ended.

Ruth graduated from nursing school and was a World War II Army nurse. She married Leland Polley when she was in her 30s; they had no children. Patricia Gott’s brief biography in Eastward Bound adds that Ruth’s final job from which she retired was as Registered Nurse Supervisor at Central Maine General Hospital, in Lewiston.

Helen has shared Obsolete with friends and family members. So many have asked for copies that she thinks the poem deserves wider distribution.

When I hear someone say “dot-com”
I don’t know where they’re coming from.
A mystery that I still don’t get,
Is what and where is the internet?
When someone said they had a ‘mouse,’
I said, “Well, fumigate the house.”
Am I the only living female
Who doesn’t understand e-mail?

I always vote and pay my taxes
But I’m not sure just what a ‘fax’ is.
Nor do I quite know what it means
When people get ‘dressed up’ in jeans.
But it doesn’t matter what they wear,
The main thing is that they are there.

Sometimes I tell myself,
“You’re old. You belong on the shelf!”
But really, that’s not hard to bear –
I’m just obsolete…and I don’t care.

VCS students pages for a day Obituaries, Week of June 22, 2017
Scroll to top