Geraldine Farrar was one of the most popular and accomplished American sopranos during her years at the Metropolitan Opera between 1907-1922, where she would appear 672 times in 29 operas, her two most famous roles being Carmen and Madame Butterfly and her most famous co-star,  Enrico Caruso. 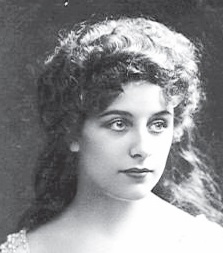 She was born in Mel­rose, Massa­chusetts. Her father, Sidney Farrar, gained much fame back in the 1890s as a major league infielder for the Phila­del­phia Quakers and the same city’s Athletics, and had Maine roots in his birthplace of Paris Hill. She displayed much talent by the age of 15, and would be a major star in Berlin from 1901-1904, where she was frequently rumored to have had an affair with Crown Prince Wilhelm (He would later become smitten with a certain dancer named Mata Hari.) .

But her most “noted affair” occurred from 1909-1915 with the then Met’s Music Director Arturo Toscanini . When she demanded he leave his wife and family to marry her, he abruptly resigned his position and sped back to Italy. A year later, she married silent film star Lou Tellegen but divorced him in 1923 because of his chronic and much reported adulteries. When he committed suicide in 1934, she was asked for a reaction and inquired back as to why his death could possibly interest her.

She recorded extensively for Victor records and was acclaimed for her unusual combo of a nearly perfect voice and sense of drama. The above record shows her gifts at making a novelty song into a delectable listening experience.

She had a most pro-active group of women fans in the ‘20s known as Gerryflappers. Other milestones included an appearance on one of the earliest AM radio broadcasts being conducted experimentally by Lee De Forrest in New York City in 1907; a career as a silent film star in several lead roles, including Carmen and Joan of Arc; and a period of years during the ‘30s as intermission commentator on the Met Saturday afternoon live radio broadcasts.

Finally, she raised and trained a gaggle of geese for a role on stage in one opera, Konigskinder, by Engelbert Humperdinck- no relation to the ‘60s singer.