A couple of weeks ago I received a phone call from a reader telling me about spotting a pileated woodpecker at her backyard feeders. For one thing, that is curious in itself because they are such isolated birds. They don’t like to to come out into the open. But what grabbed my interest in talking with this person was that she didn’t only see one, but three of them at one time. 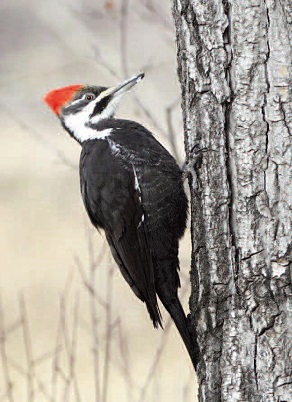 I had never heard of that.

She did follow that up by saying there was one smaller than the other two. So, logic would indicate two adults and a young.

We have had pileated woodpeckers at camp, but in the 28 years we’ve been there, I have seen one on only three occasions. And every time was by accident. I just happened to catch a glimpse of it in flight through the thickest part of the woods.

I did, however, see one a couple of years ago in my backyard in the middle of Waterville. I just happened to be looking out the kitchen window when I saw it perched on an apple tree stump. My first thought at the time was it was obviously lost.

Numbers in the eastern United States declined sharply during the 18th and 19th centuries with the clearing of forests. However, since 1900, they have made a gradual comeback, becoming common in some areas.

The incubation period is about 18 days, with both sexes participating (with the males incubating at night and part of the day). Both parents feed the young by regurgitation. After about a month, the young are ready to fledge on their own. However, some young have been known to stay with the parents up to three months.

Pileated woodpeckers favor mature hardwood forests, but will inhabit smaller woodlots as long as they contain some taller trees.

They remain in their area all year round, and are not migratory. They defend their territory all season, but will tolerate others passing through during the winter.

Its ability to survive in many different wooded habitat has allowed the species to survive human habitation. Even though they do not migrate, they are protected under the U.S. Migratory Bird Act.

Despite the fact they control many insect populations, especially tree beetles, some people consider them a nuisance because of the harm they can inflict on trees.

Offering woodpeckers food in an environment in which they are comfortable and familiar is the best way to bring them out of the woods and into your yard. My wife has several feeders at our home, one with a buffet of different seeds and nuts, also spiced with cayenne pepper (to discourage the squirrels) which attracts many song birds. But we also have a steady showing of both hairy and downy woodpeckers. We have yet to see a pileated.