Camille Saint-Saens (1835-1921) was displaying perfect pitch before he was three years old and would be a child prodigy on the piano by age five; however, his mother sensibly decided he was too young for any exposure to the rigors of public acclaim through an official debut but the boy was allowed to perform for family, friends and other small groups occasionally. 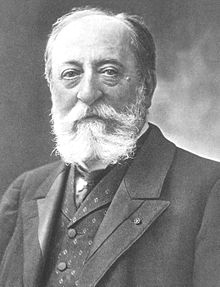 From 7 to 13 years of age, Saint-Saens studied with the gifted pedagogue, Camille-Marie Stamaty (1811-1870), who had certain unorthodox teaching tools; for example, he would set a bar in front of the keyboard, and insist that his students rest their elbows and forearms on it, relying only on their fingers and hands to play . The composer felt this was good training.

He gave his first public concert in Paris at 10 years old, performing Concertos by Mozart and Beethoven.

At age 13, he was admitted to the Paris Conservatory but, despite being an outstanding pianist, was strongly encouraged to study organ because of the prevailing view that employment opportunities for organists were far greater in France than for pianists, especially with the large number of churches. He switched his focus to that instrument, got a job as organist at 18 for one of the oldest Parisian churches, itself with 26,000 parishioners and made very good wages. Composer Franz Liszt declared Saint-Saens to be the greatest organist he ever heard.

One of Saint-Saens’s teachers introduced him to the music of Bach, which was one of his greatest loves.

While at the Conservatory, he was also an outstanding student in many other subjects, including French literature, Greek and Latin, philosophy, math, theology, astonomy etc., and would have a lifelong passion for learning.

He premiered the Organ Symphony in London in 1886 where it met with immediate success. Ironically, after 20 years of being a church organist, he cared little for the instrument yet wrote what I feel is his most moving work. It is scored for full orchestra, organ and two pianos and is given a very nice recording by organist Philippe Lefebvre, in a collaboration with the French National Radio Orchestra, under Seiji Ozawa, who was music director of the Boston Symphony from 1973 to 2002. Ozawa also included two very elegant tone poems based on Greek mythology, Phaeton and Omphale’s Spinning Wheel, on this mid-1980s CD.

As a young man, Saint-Saens championed the music of Schumann, Liszt and Wagner but grew quite reactionary with age. He was the teacher and lifelong friend of composer Gabriel Faure but considered Debussy and Stravinsky to be dangerous lunatics who deserved to be institutionalized, after hearing their music.

He gave his last recital in November 1921, at the age of 86, and was reported as being in vigorous health. A month later, he died suddenly of a heart attack while vacationing in Algiers.

Saint-Saens was so precociously talented from his earliest years that Hector Berlioz (1803-1869) commented that this young man lacked one important quality – inexperience!

The Kennebec Indian tribe Give Us Your Best Shot! for Thursday, April 9, 2020
Scroll to top