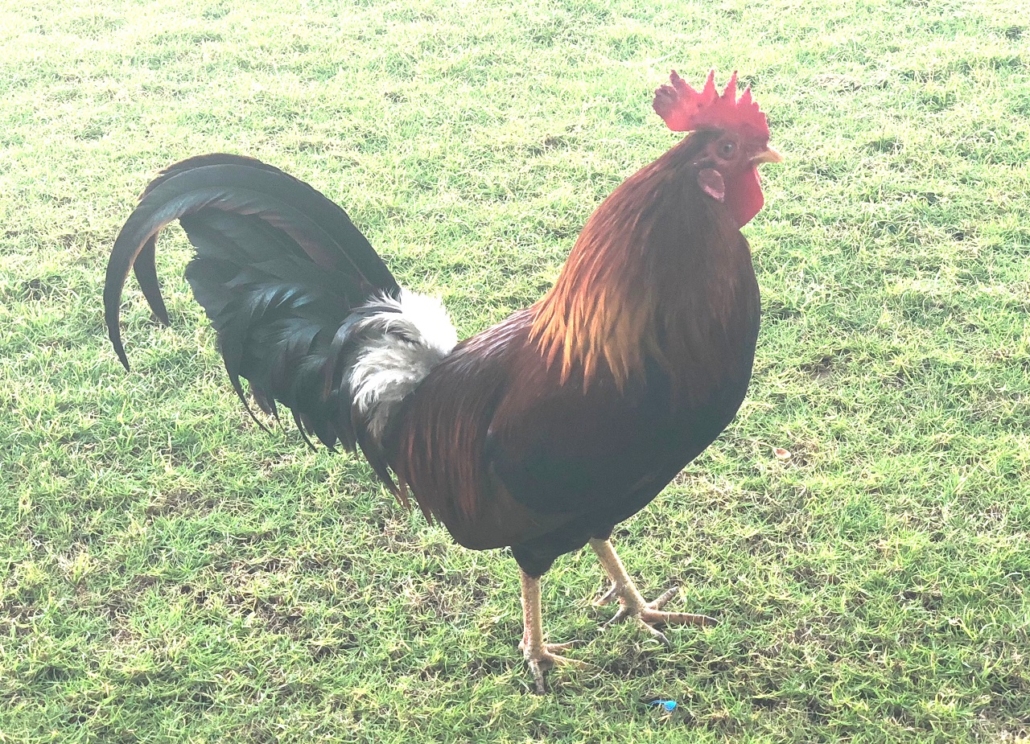 One of the more common sights around a barnyard is the good ol’ rooster. But, why is he there?

My granddaughter and her husband live in Belgrade on about seven acres of land that they have kind of turned into a mini farm. They have pigs, goats, and chickens. A little while back, they acquired a rooster to fill out their immediate roster.

However, the rooster has become a problem. While we were there a few weeks back, the rooster seemed to be crowing all afternoon. Well, truth be told, that was only the tip of the iceberg. It seems he likes to visit the neighbors, and goes into his routine, which I thought was only at sunrise. I always thought the rooster would crow at the rising of the sun on the farm to awaken everyone to chores of the day. I guess not.

So, with complete understanding, the neighbors were getting a little annoyed with the scene.

I, personally, have had an up close encounter with one of those little critters.

When I was around 10 years old, or so, the family used to drive to the Abitibi region of Canada, to spend a few days at our grandfather’s farm. While we were there, it was no vacation. My three brothers and I had chores to do along with their children. It was up at dawn – before breakfast – and off to the barn. The older boys would round up the cows for milking, while my younger brother and I had smaller chores.

One of them was to feed the chickens and the pig. Well, I don’t have to tell you the encounters with the rooster weren’t always pleasant. He would defend the roost to no end. So, one day, I thought I would outfox the little devil. Since we had to enter the chicken coop, I looked around to see if I could locate him. Not seeing him in the field, I checked the inside of the coop by peering through the window. Still no rooster.

At that point I figured he was out and about, and had no interest in me today. Slowly, I opened the door to the pen and glanced around one last time. The coast was clear. I entered the coop and closed the door behind me. Well, the little dickens was hiding behind the door, and now had me trapped because he was between me and the door.

He then went into full attack mode, snipping at my Achilles with relentless ferocity. As a 10-year-old, I wasn’t sure I would survive. (That’s even more so now, since I read where a 76-year-old woman in Australia was killed by her rooster while she was picking up eggs from the barnyard.) I managed to push him aside – actually, it was more like kicking him – with my foot, and made my escape. Needless to say I have since not had fond feelings towards roosters. I don’t trust them.

So, what exactly is the function of the rooster.

The rooster is polygamous, but cannot guard several nests of eggs at once. He guards the general area where his hens are nesting, and attacks other roosters that enter his territory. During the daytime, a rooster often sits on a high perch to serve as a lookout for his group (hence the term “rooster”). He sounds a distinctive alarm call if predators are nearby and will frequently crow to assert his territory.

The term “rooster” actually originated in the United States as a puritan euphemism to avoid the sexual connotation of the original English name of a “cock.” Since a rooster roosts, it was only natural to give it that name.

Roosters almost always start crowing before four months of age. Although it is possible for a hen to crow as well, crowing, together with hackles development, is one of the clearest signs of being a rooster.

The rooster is often portrayed as crowing at the break of dawn. However, while many roosters crow shortly after waking up, this idea is not exactly true. A rooster can and will crow at any time of the day. Some roosters are especially vociferous, crowing almost constantly, while others only crow a few times a day. These differences are dependent both upon the rooster’s breed and it’s individual personality. A rooster can often be seen sitting on fence posts or other objects, where he crows to proclaim his territory.

But, I do have to say I felt bad when my granddaughter told me they had to get rid of the rooster in order to maintain good relations with the neighbors. He was only doing his job.

Who was the Red Sox MVP following their 2018 World Series victory?

Roland’s Trivia Question for Thursday, April 16, 2020 CRITTER CHATTER: Does it need to be rescued?
Scroll to top