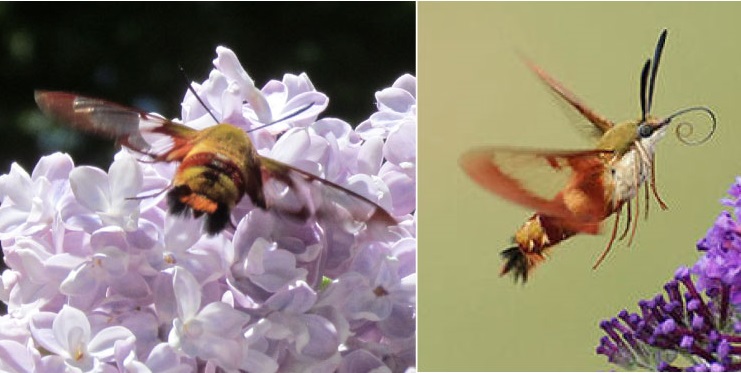 Last week I received an email from a reader, who resides in Palermo. She sent a photo and asked what kind of bumble bee it was? She had photographed it feeding on her lilacs.

At first glance, I thought it was a sphinx moth – better known as a hummingbird moth. But the more I looked at it, the less sure I was. It was a photo taken from behind, and most of its characteristic suggested hummingbird moth, but some of the coloration didn’t seem right. I began doubting myself.

I sent the photo off to Michael Parisio, forest entomologist with the Maine Forest Service, who confirmed it was a hummingbird clear wing moth. His comment was that the moth had done its job very well, fooling the photographer into thinking it was something else than what it really was.

I was right, after all.

The hummingbird clear wing moth, Hemaris thysbe, is olive green and burgundy on its back, and white or yellow and burgundy on the underside. Its wings are transparent with a reddish-brown border. It has light-colored legs, which combined with the lack of striping on the underside, is diagnostic. Beating their wings rapidly, they hover to collect nectar from a variety of flowers. The combination of its appearance and its behavior commonly leads to it being confused with a hummingbird or bumble bee. That certainly was the case with our reader.

They are found in a large portion of North America, with a range extending from Alaska to Oregon in the west and from Newfoundland to Florida in the east. It is a migratory species and is most common in southern Ontario and the eastern United States. They have two broods a year in the southern portion of its range, but only one in the north. The caterpillar feeds on honeysuckle, dogbane and several types of fruit trees.

As a caterpillar, it burrows into the soil to overwinter as a brown, hard-shelled pupa. In the late spring, it emerges as an adult moth. They lay green eggs on the underside of plant leaves, which hatch in about a week. Development takes four weeks, after which the caterpillar spins a cocoon at ground level. Two to four weeks later a moth emerges for a second breeding cycle before summer’s end in southern climates. It has a single mating cycle per year.

It has minimal economic impact to humans, acting neither as a crop pollinator nor as a pest. The moth is a flower pollinator, especially some species of orchids. They are not endangered nor threatened.

Due to the variable appearance of the moth, it has often been mistakenly described as multiple distinct species. It was first described by Johan Christian Fabricius, in 1775, as a Sesia thysbe. The species name is likely a reference to Thisbe, half of a pair of ill-fated lovers in Ovid’s Metamorphoses. The name thus associates the blood-stained scarf of Thisbe to the reddish-brown coloration of the moth.

While most sphinx moths fly at night, hummingbird moths fly during the day. They can be found in a wide variety of habitats, including open meadows, forest edges, and suburban gardens. They feed on flower nectar, dipping in a long thin proboscis. Both the Palermo resident and Parisio spotted hummingbird moths feeding on lilac bushes.

In inches, how big is the diameter of a basketball hoop?