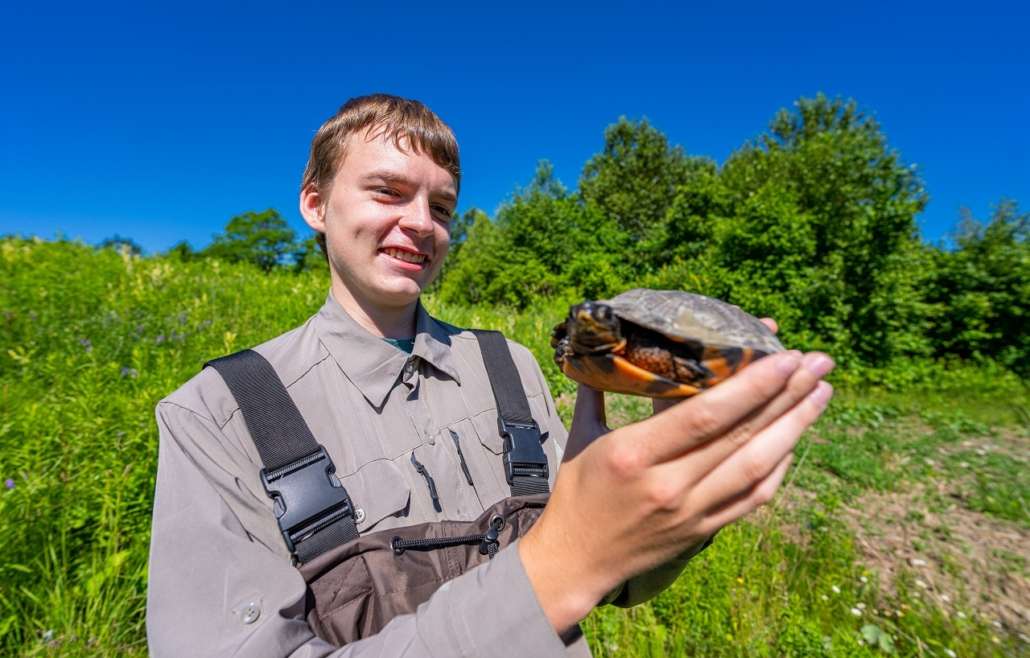 This came across my desk last week, and I thought it would make a good story for this week’s column.

Growing up in China, Maine, Hunter Praul said he always had an interest in exploring the outdoors, especially for reptiles and amphibians. He became an Eagle Scout, but even outside of his troop outings, he would find himself in forests, lakes and stream banks looking for frogs, toads, turtles and anything else he could find.

As a student researcher at the University of Maine, Praul has taken his love for nature’s slimy and scaly creatures and applied it to the mission of conservation in Maine.

When Praul graduated from high school, he was named to the Maine Top Scholars program, which provides full tuition and research opportunities for the highest achieving high schoolers in the state to attend the University of Maine.

Since early spring 2022, Praul has worked on a variety of turtle conservation research projects in the lab of Matthew Chatfield, assistant professor at the School of Biology and Ecology. Praul’s primary project aims to record the musk turtle population on the nearby Pushaw Lake, which is thought to be one of most northern (if not the northernmost) parts of the species’ habitat range.

“It would be interesting to get data and information on the most northern population to see if there are differences from the southern ones or even just more southern in the state, although there hasn’t been much research on them, especially in Maine,” Praul says.

Every month for the past couple months, Chatfield and Praul have headed out to three different plots near Gould’s Landing to lay six sardine-baited traps at each, strategically placing them at different levels of vegetation and depths along the shore. For that week, they return every morning to check the traps, repair any damage wrought by hungry raccoons or snapping turtles, and record their observations.

“I have worked with thousands of students in the classroom and dozens in a field or mentoring capacity and I have to say Hunter [Praul] is probably the most meticulous student I have ever met,” Chatfield says. “Every word and number on the data sheet gets recorded exactly right. He’s definitely one of the strongest undergraduate researchers I have come across.”

Praul admits, though, that he hasn’t had much luck finding musk turtles this summer. He has only found one, though he has seen plenty of the common painted turtles throughout the course of his study.

“We might be in the wrong spot in the lake, but there also might not be as many in the lake as we originally thought,” Praul says. “We’re taking a little break and we’re going to try again at the end of this summer to see if there’s a seasonal change in numbers.”

Praul is still hoping to use the musk turtle project for his senior capstone project, but if doesn’t find enough musk turtles to draw any substantive conclusions about the Pushaw Lake population, he will use data from a graduate project in Chatfield’s lab about wood turtles. Praul has been assisting graduate students with fieldwork using radiotelemetry to observe and record the nesting behavior of wood turtles, a heavily trafficked and internationally listed endangered species that purportedly has a stronghold in Maine.

Almost every week, Praul will join a graduate student researcher at their streamside site; the exact location is confidential, to protect the highly-trafficked turtles. They use a receiver to find the turtles observed for that study, which are tagged with radio telemeters, and record environmental and behavioral data about their subjects.

Turtles aren’t the only animal that Praul interacts with for this research, either.

“To help with finding wood turtles, there is a dog that has been trained to find them,” Praul says. “Sometimes her handler [Lindsay Ware of Science Dogs of New England] and I take her out to go sniffing through the grass and stream. If she finds a different species, she’ll pass on it, and if she finds a wood turtle, she’ll just stand over until we get there.”

The dog’s name is Chili Bean, Chili for short. Some of the wood turtles have names, too, like Crowley, Outlaw and Jennifer Lawrence — to make them easier to identify in the field, of course.

Outside of his herpetology projects, Praul also works at the UMaine Environmental DNA Laboratory conducting lab procedures. He said it’s “very interesting” and “cool to do,” but he prefers studying the natural world on a larger scale.

Praul plans to graduate this spring after his third year at the University of Maine. He isn’t exactly sure what he will do after that, but one thing is for sure: he wants to work with animals.

“I definitely still say herpetology is my main interest, but I also basically have an interest in all animals,” Praul says. “It makes it a little bit harder to choose something if there are so many options.”

Which pitcher is the all-time saves leader for the Boston Red Sox?