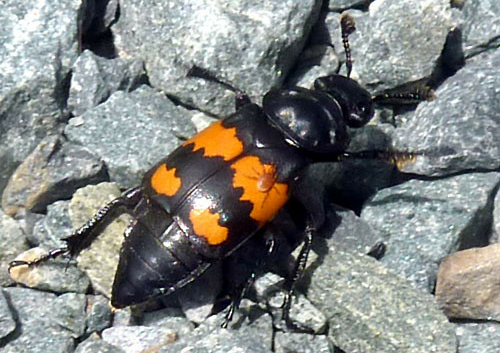 No, we’re not going to talk about the David Ortiz shooting.

A couple of weeks ago we talked about these beetles that appeared in a bucket at our camp (See The Town Line, June 20, 2019).

At first, through some research, especially the website of the Iowa State University Department of Entomology, they were identified as Glischrochilus, or better known as picnic beetles or beer bugs.

Well, it has come to my attention that I was mistaken.

The beetles bear a strong resemblance to each other. According to Michael Parisio, of the Maine Forest Service, my contact in that department, the bugs are actually called carrion beetles. He wrote: “Although I was not able to tell from the low quality photo of the actual beetle recovered from your bucket, I believe you might have a case of mistaken identify here and would like to offer another explanation. I suspect you’ve recovered what are commonly referred to as carrion beetles, family Silphidae, which is what is actually pictured in the stock photo used at the beginning of this article. These beetles rely on the carcasses of small dead animals for their young to develop, such as mice, and were likely attracted to the lingering smell of dead mice infused into the bucket used for your mouse trap. These are commonly recovered in the reservoirs of wet traps used for catching other insects, since carrion beetles are attracted to the smell of anything decomposing.”

So, back to the internet.

Silphidae is a family of beetles that are known commonly as large carrion beetles. They are sometimes known as Sexton beetles.

These beetles are ubiquitous and are most abundant in the temperate zone – that would be us. They are quite rare in the tropics although there are species endemic in the region. It is thought that ants, flies and other carrion feeders out-competing them in these regions.

Their life cycle begins when the prospective parents begin to dig a hole below the carcass. While doing so, and after removing all hair from the carcass, the beetles cover the animal with antibacterial and antifungal oral and anal secretions, slowing the decay of the carcass and preventing the smell of rotting flesh from attracting competition. The carcass is formed into a ball and the fur or feathers tripped away and used to line and reinforce the crypt, where the carcass will remain until the flesh has been completely consumed. The burial process can take around eight hours. Several pairs of beetles may cooperate to bury large carcasses and then raise their brooks communally.

The female lays eggs in the soil around the crypt. The larvae hatch after a few days and move into a pit in the carcass which the parents have created. Although the larvae are able to feed themselves, both parents also feed the larvae in response to begging. They digest the flesh and regurgitate liquid food for the larvae to feed on, a form of progressive provisioning. This probably speeds up larval development. It is also thought the parent beetles can produce secretions from head glands that have antimicrobial activity, inhibiting the growth of bacteria and fungi, on the vertebrate corpse.

At an early stage, the parents may cull their young. They do this to match the number of larvae to the size of the carcass so that there is enough food to go around. If there are too many young, they will all be underfed and will develop less quickly, reducing their chances of surviving to adulthood.

The adult beetles continue to protect the larvae, which take several days to mature.

These beetles are not usually considered a nuisance to humans. They help the environment by laying their eggs on carcasses and the larvae break down the disintegrating materials, which prevents accumulation of deceased organisms. They will sometimes occupy human-inhabited areas and become pests to farmers by using crops as a second source of nutrients.

In the future, entomologists will explore the social behavior of the beetles to a greater degree. The Silphidae are typically the first to come in contact with carrion.

It was interesting to note that when I wrote that article three weeks ago there were six beetles in the bucket. With only water at the bottom of the bucket, because the carcasses had been removed weeks earlier, I later found 19 beetles were now occupying the water, and had obviously drowned. I guess I’ll have to do a better job cleaning the bucket next year.

Which Red Sox player has hit the most home runs in All Star games: Jim Rice, Ted Williams or Carl Yastrzemki?