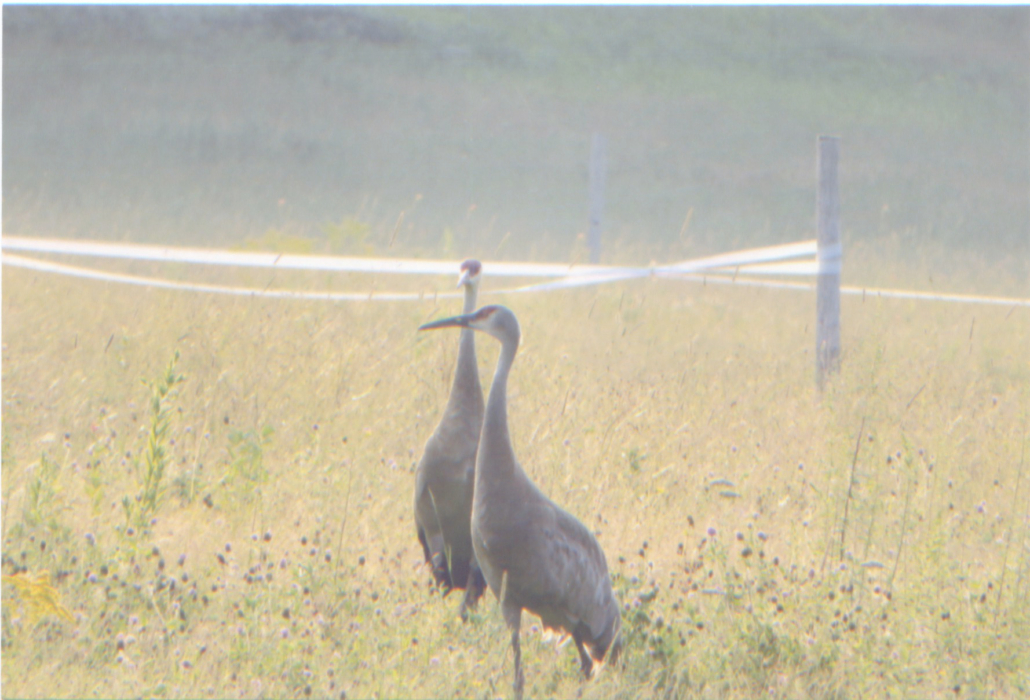 Several people now have shown me photos of a large bird that is seen grazing in the fields of central Maine. I’ve seen them before, but reports of sightings have become more frequent. They would be sandhill cranes.

The sandhill crane, Antigone canadensis), is a species of large crane of North America and extreme northeastern Siberia. The common name of this bird refers to habitat like that at the Platte River, on the edge of Nebraska’s Sandhills on the American Plains. This is the most important stopover area for the subspecies.

Adults are gray overall; during breeding, their plumage is usually much worn and stained, particularly in the migratory populations, and looks nearly ochre. The average weight of the larger males is 10 pounds, while the average weight of females is just under 9 pounds. Sandhill cranes have red foreheads, white cheeks, and long, dark, pointed bills. In flight, their long, dark legs trail behind, and their long necks keep straight. Immature birds have reddish-brown upperparts and gray underparts. The sexes look alike. Sizes vary among the different subspecies; the average height of these birds is around to feet, seven inches, to four feet, six inches. Their wing chords are typically 16.5 – 23.6 inches, tails are 3.9 – 10.4 inches.

These cranes frequently give a loud, trumpeting call that suggests a rolled “r” in the throat, and they can be heard from a long distance. Mated pairs of cranes engage in “unison calling”. The cranes stand close together, calling in a synchronized and complex duet. The female makes two calls for every one from the male.

Sandhill cranes fly south for the winter. In their wintering areas, they form flocks over 10,000. One place this happens is at Bosque del Apache National Wildlife Refuge, south of Albuquerque, New Mexico. An annual Sandhill Crane Festival is held there in November.

Sandhill cranes have one of the longest fossil histories of any extant bird. A 10-million-year-old crane fossil from Nebraska is said to be of this species, but this may be from a prehistoric relative or the direct ancestor of sandhill cranes and not belong in the genus. The oldest unequivocal sandhill crane fossil is 2.5 million years old, older by half than the earliest remains of most living species of birds

Sandhill cranes are fairly social birds that usually live in pairs or family groups through the year. During migration and winter, unrelated cranes come together to form “survival groups” that forage and roost together. Such groups often congregate at migration and winter sites, sometimes in the thousands.

Sandhill cranes are mainly herbivorous, but eat various types of food, depending on availability. They often feed with their bills down to the ground as they root around for seeds and other foods, in shallow wetlands with vegetation or various upland habitats. Cranes readily eat cultivated foods such as corn, wheat, cottonseed, and sorghum. Waste corn is useful to cranes preparing for migration, providing them with nutrients for the long journey. Among northern races of sandhill cranes, the diet is most varied, especially among breeding birds. They variously feed on berries, small mammals, insects, snails, reptiles, and amphibians.

Sandhill cranes raise one brood per year. In nonmigratory populations, laying begins between December and August. In migratory populations, laying usually begins in April or May. Both members of a breeding pair build the nest using plant material from the surrounding area. Nest sites are usually marshes, bogs, or swales, though occasionally on dry land. Females lay one to three (usually two) oval, dull brown eggs with reddish markings. Both parents incubate the eggs for about 30 days. The chicks are precocial; they hatch covered in down, with their eyes open, and able to leave the nest within a day. The parents brood the chicks for up to three weeks after hatching, feeding them intensively for the first few weeks, then gradually less frequently until they reach independence at 9 to 10 months old.

As a conspicuous ground-dwelling species, sandhill cranes are at risk from predators, which are probably the main source of mortality. Mammals such as foxes, raccoons, coyotes, wolves, cougars, bobcats, and lynx hunt them given any opportunity, the first three mainly hunting large numbers of young cranes, the latter four types more rarely taking full-grown cranes in ambush excepting the prolific bobcat. Corvids, such as ravens and crows, gulls, and smaller raptors such as hawks (largely northern harriers or red-tailed hawks) feed on young cranes and eggs.

Cranes of all ages are hunted by both North American species of eagles. Mainly chicks and possibly a few adults may be preyed on by great horned owls and even the much smaller peregrine falcons has successfully killed a 6.8-pound adult sandhill crane in a stoop.

Sandhill cranes defend themselves and their young from aerial predators by jumping and kicking. Actively brooding adults are more likely to react aggressively to potential predators to defend their chicks than wintering birds, which most often normally try to evade attacks on foot or in flight. For land predators, they move forward, often hissing, with their wings open and bills pointed. If the predator persists, the crane stabs with its bill (which is powerful enough to pierce the skull of a small carnivore) and kicks.

In the 20th century, sandhill cranes were generally extirpated east of the Mississippi River. Although sandhill cranes are not considered threatened as a species. Resident populations, not migratory birds, cannot choose secure breeding habitat. Many subpopulations were destroyed by hunting or habitat change. Their desirability as a delicious game bird brought them the nickname of “Rib-eye of the sky” by a small group of modern hunters. The greater sandhill crane proper initially suffered most; by 1940, probably fewer than 1,000 birds remained. Populations have since increased greatly again. At nearly 100,000, they are still fewer than the lesser sandhill crane, which, at about 400,000 individuals, is the most plentiful crane alive today.

Some migratory populations of sandhill cranes face population threats due to interspecies competition with snow geese. duced offspring for annual releases into the refuge.

So, it is fair to summize that although they were generally extirpated east of the Mississippi River, they are making a comeback, as frequent sightings in the central Maine area are not uncommon.

Which Boston Red Sox player has won the most batting average titles.

The answer can be found here.