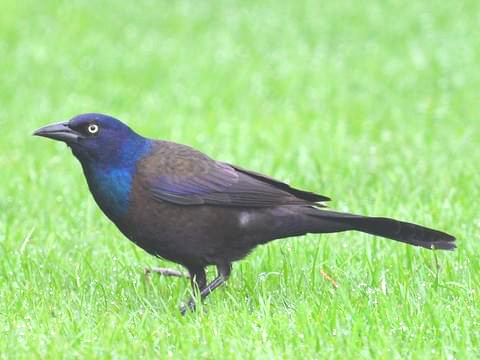 They swarm down from the heavens in flocks and take over the ground. They stay for a while, and then all leave together, like someone giving an order to evacuate the location. They are also a nuisance if you have a garden.

The common grackle, Quiscalus quiscula, is a large member of a species of birds that are often colorful and found in large numbers through much of North America. Most species have black as a predominant plumage color.

Adult common grackles have a long and dark bill, pale yellow eyes, and a long tail. Adults often have an iridescent appearance on their head, especially males. Common grackles are found in much of North America east of the Rocky Mountains.

The common grackle was first described in 1758 by Carl Linnaeus in the tenth edition of Systema Naturae.

Adult common grackles measure from 11 to 13 inches in length, span 14 – 18 inches across the wings, and weigh 2.6 – 5 ounces. Common grackles are less sexually dimorphic than larger grackle species, but the differences between the sexes can still be noticeable. The male, which averages 4.3 ounces, is larger than the female, at an average of 3.3 ounces. Adults have a long, dark bill, pale yellowish eyes, and a long tail; their feathers appear black with purple, green, or blue iridescence on the head, and primarily bronze sheen in the body plumage. Adult females, beyond being smaller, are usually less iridescent; their tails in particular are shorter, and unlike the males, do not keel in flight and are brown with no purple or blue gloss. Juveniles are brown with dark brown eyes.

When grackles are in a group, they are referred to as a “plague.”

The breeding habitat is open and semi open areas across North America east of the Rocky Mountains. The nest is a well-concealed cup in dense trees (particularly pine) or shrubs, usually near water; sometimes, the common grackle nests in cavities or in man-made structures. It often nests in colonies, some being quite large. Bird houses are also a suitable nesting site. Four to seven eggs are in a clutch.

This bird is a permanent resident in much of its range. Northern birds migrate in flocks to the Southeastern United States. The distribution of the common grackle is largely explained by annual mean temperature, and the species has expanded its range by greater than three-fold since the last glacial maximum, approximately 22,000 years ago.

The common grackle forages on the ground, in shallow water, or in shrubs; it may steal food from other birds. It is omnivorous, eating insects, minnows, frogs, eggs, berries, seeds, grain, and even small birds and mice. Grackles at outdoor eating areas often wait eagerly until an unwary bird drops some food. They rush forward and try to grab it, often snatching food out of the beak of another bird. Grackles prefer to eat from the ground at bird feeders, making scattered seed an excellent choice of food for them. Grackles can be regularly seen foraging for insects, especially after a lawn trimming.

Along with some other species of grackles, the common grackle is known to practice “anting”, rubbing insects on its feathers possibly to apply liquids such as formic acid secreted by the insects.

The grackle’s song is particularly harsh, especially when these birds, in a flock, are calling. The songs occasionally sound like a power line buzzing. The grackle can also mimic the sounds of other birds or even humans, though not as precisely as the mockingbird, which is known to share its habitat in the Southeastern United States.

In the breeding season, males tip their heads back and fluff up feathers to display and keep other males away. This same behavior is used as a defensive posture to attempt to intimidate predators. Male common grackles are less aggressive toward one another, and more cooperative and social, than the larger boat-tailed grackle species.

The range of this bird expanded west as forests were cleared. In some areas, it is now considered a pest by farmers because of its large numbers and fondness for grain. Despite a currently robust population, a recent study by the National Audubon Society of data from the Christmas Bird Count indicated that populations had declined by 61 percent to a population of 73 million from historic highs of over 190 million birds.

Unlike many birds, the common grackle benefits from the expansion of human populations due to its resourceful and opportunistic nature. Common grackles are considered a serious threat to crops by some, and are notoriously difficult to exterminate; this usually requires the use of hawks or similar large birds of prey.

Whether this is of any significance to mankind, they don’t know. But I do know that when they arrive, it’s as if they are attracted to each other like magnets.

What is the mascot of the new NHL franchise in Seattle?