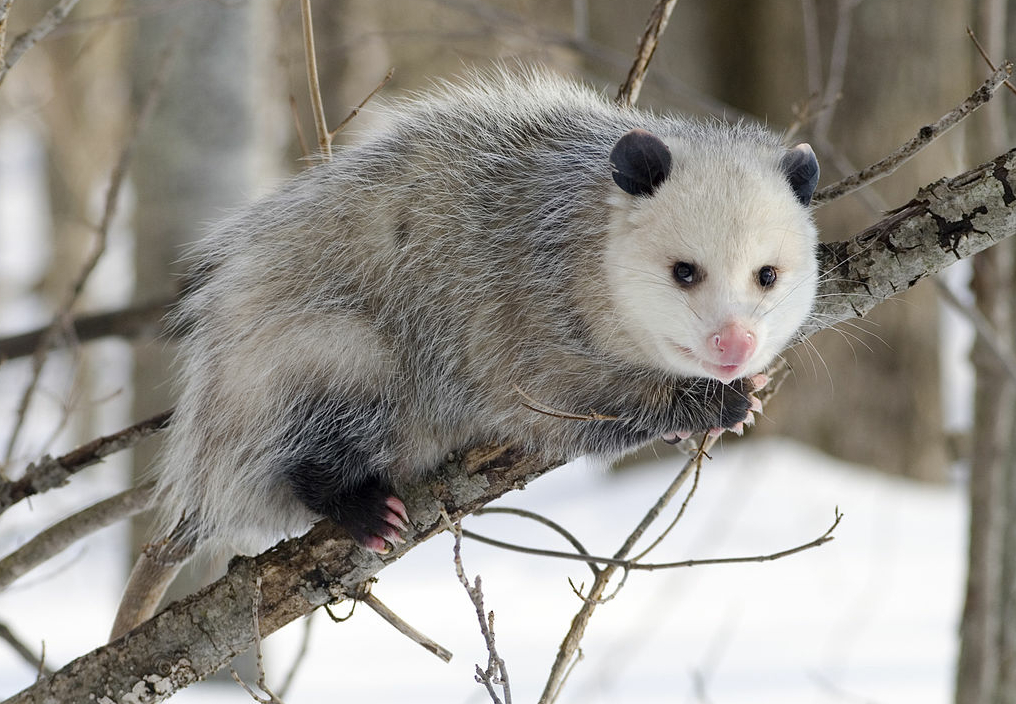 A friend of ours, who lives along the Kennebec River, in Fairfield, told us last weekend that she came across a “dead” opossum in her backyard. We’ll get to that later.

Opossums normally live in forested or brushy habitats, but they have adapted well to living close to people in cities and suburbs. Opossums will den nearly anywhere that is dry, sheltered and safe. This includes burrows dug by other mammals, rock crevices, hollow stumps, wood piles and spaces under buildings.

They are attracted to overflowing or odorous trash cans, uncovered compost heaps or other containers that you may have outside. They like to set up their habitat near water or moist areas. If you live near a pond, drainage ditch or sewer, you’re more likely to see opossums on your property.

Opossums like to move into tree holes or dens left behind by other animals such as squirrels. Opossum nests in trees are lined with grass, hay, leaves, and cotton-like materials for insulation.

If there is an opossum in the backyard, don’t worry. They aren’t a threat, and more than likely they will be moving on in a short while. But far from being a nuisance, opossums can be beneficial for your garden, eating snails, slugs, insects and sometimes even small rodents.

Opossums, however, can cause damage to your lawns and backyards. If you notice small holes dug in the area, it may be an opossum. They want to get to grubs and other insects so they dig shallow holes in the dirt. They are not too deep but can still disturb the lawn. But, this sign doesn’t necessarily mean you have opossums around. Skunks will do the same thing.

A common question asked is if an opossum can get into your house. An open door or window may be an invitation for an opossum to enter your home. You may find an opossum in your home, especially if you have a “doggie door” for your pets. They can also move into your attic. Due to the lack of adequate tree hollows, possums move into roofs through holes and establish homes for themselves inside where it is safe and dark.

If you should find an injured opossum, contact your nearest wildlife rehabilitation unit and do not try to treat it on your own. It is also challenging to tell a dead opossum from the one that is playing dead (playin’ ‘possum), even if you poke and prod it: in that case, leave it be, and it will escape in a few hours. As I mentioned earlier, an opossum that looks dead, may not be. My friend did not say whether she saw the opossum again in the same location.

Opossums are incredibly impressive at playing dead, to the point where they can be picked up and carried away. Many opossums have been accidentally killed by well-meaning humans burying a “dead” opossum in their yard, or running over a “dead” opossum on the side of the road.

How about health issues with opossums in your area? It is extremely rare for them to get rabies so, if, you see one walking in circles it has most likely been hit or illness by ticks or brain damage.

Their territory is not always located in the same area. A possum can wander for miles, but if it finds a good hunting area, it will stay. The best place to release an opossum, raccoon, mouse or rat, etc., is in a wooded and, hopefully, wild area with access to water and food. The home range of an opossum is about 50 acres. They are not territorial to the extent that they defend their ranges from other opossums

Contrary to popular belief, opossums aren’t blind at all. They just have terrible eyesight during the day. Their pupils are always dilated, and as nocturnal animals, an opossum’s eyesight improves drastically at night.

Most opossums are around the size of a housecat. These marsupials have an elongated snout, and a large sagittal crest – a bone making their forehead look taller. They have scaly feet, and a scaly prehensile tail. A prehensile tail can be wrapped around branches to stabilize the animal while climbing.

Opossums, the only naturally occurring marsupial in North America, are incredibly interesting creatures. They have a number of distinguishing characteristics that are typically unknown to the general population. These scary-looking creatures are, unfortunately, misunderstood.

The poor opossum is generally viewed as an ugly pest of an animal. Though they will occasionally make their homes in our attics and crawl spaces, and feed from our garbage cans, opossums are only doing what they need to do to survive. They are frequently struck by cars searching for carrion and garbage on roadsides, and can be killed by domestic dogs. Opossums rarely cause injuries to humans, preferring to run and hide, or simply play dead.

Opossums have not been domesticated in any way. It is a wild animal, and should not be kept as a pet. In many states, including Maine, it is illegal to keep an opossum as a pet, and can result in a hefty fine.

Opossums are mainly solitary, but will share a living space with other animals. They will remain in a location as long as food and water are readily available, and will move on when resources run out. This behavior is called nomadic living. Opossums are nocturnal, and emerge from their dens to forage for food at night.

Opossums are marsupials, who carry their young in a pouch. They will give birth after a 12-14 day gestation period, and the young will emerge from the pouch 70-125 days later.

So, in the end, I have to ask the question: Was the opossum my friend saw really dead, or was it playin’ ‘possum?

The last four quarterbacks for the New England Patriots have been Mac Jones, Cam Newton, Tom Brady and Drew Bledsoe. Who was the quarterback before?