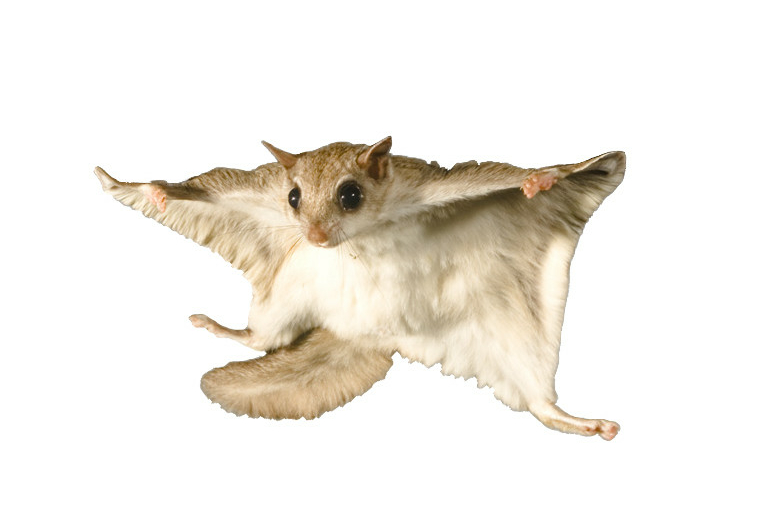 If you want to see a flying squirrel, you will have to be an early riser, because the flying squirrel, unlike its cousins, is nocturnal. All other North American squirrels are active during the day.

Arboreal rodents, they have thick light brown or cinnamon fur on their upper body. A furry membrane extends between the front and rear legs, and allows the animal to glide through the air. It’s grayish on the flanks and whitish underneath. They have large eyes and a flat tail. They can also be identified by their long whiskers, which are common to nocturnal mammals.

A flying squirrel doesn’t actually fly, but glides downward, using the wide flaps of skin along its sides to help slow its descent. To become airborne, this mammal leaps and spreads its legs, uses its tail as a rudder and moves its legs. Immediately after it lands, it will scurry to the far side of the tree just in case an owl is in pursuit. They can glide distances of 20 to 30 feet. 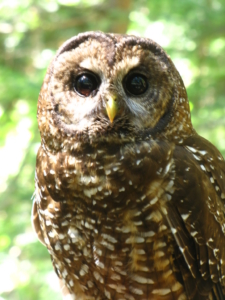 Northern flying squirrels are an important prey species for the Spotted Owl. Other predators include large birds, especially the Great Horned Owl, hawks, the American Marten, the Canadian Lynx and Red Fox.

The major food sources for the squirrels are mushrooms of various species, although they also eat lichens, nuts, tree sap, insects, carrion, bird eggs and nestlings, and buds and flowers. The squirrels are able to locate truffles, although they also seem to use cues such as the presence of coarse woody debris, indicating a decaying log, and spatial memory of locations where truffles were found in the past.

They are also known to cache food for when food supplies are lower. These caches can be in cavities of trees, as well as in the squirrels’ nest. Lichens and seeds are commonly cached.

The northern flying squirrel nests in holes in trees, and will also build outside nests called dreys. They sometimes use cavities created by woodpeckers.

Except when rearing young, the squirrels shift from nest to nest frequently. They often share nests. Although there usually are 2-5 individuals in a nest, it was once observed that over 50 individuals were occupying one nest.

The sharing of nests is important in maintaining body temperature in the winter, as flying squirrels do not hibernate. In the winter, they tend to live in conifer areas of mixed woods, while in summer they are found in conifers and deciduous areas. This behavior is associated with the belief that the canopy cover is important in protecting the squirrels from predation and colder temperatures. In all but the worst severe weather conditions, the squirrels are active year round.

Squirrels, in general, get no respect. They are a nuisance around bird feeders and can raise havoc in a garden, not to mention them digging through your pumpkins in search of the seeds. But, did you know that January 21 is Squirrel Appreciation Day? Founded by Christy Hargrove, a wildlife rehabilitator, from Asheville, North Carolina, in 2001, that day is set aside annually to give us all the opportunity to enjoy and appreciate the tree-climbing, nut-gathering neighborhood squirrels. That includes flying squirrels, too.

What player made the first 3-point basket in the NBA?

Roland’s Trivia Question for Thursday, May 2, 2019SOLON & BEYOND: Inquiry from afar on the passing of Carolyn Waugh
Scroll to top