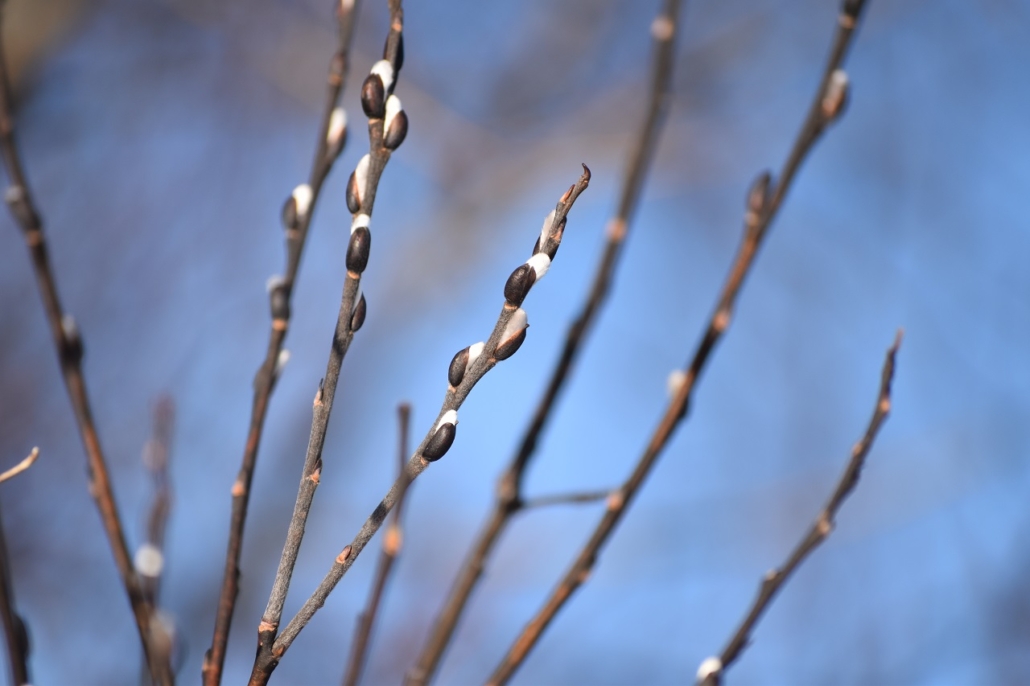 Pussy willows, photographed by Joan Chaffee, of Clinton, on March 9.

This week, we’re going to move away from the animal world and take a look at some fauna.

Joan Chaffee, of Clinton, recently sent some photos of pussy willows she snapped while snowshoeing. She wrote, “I was snowshoeing this past Saturday, March 9, in our back field and came across these pussy willows. A sure sign of Spring!”

At the tail end of winter, fuzzy nubs start to appear along the branches of pussy willows. So, what exactly, are these little nubs?

They are actually flowers just before they fully bloom, and not seeds or fruits like they are perceived. The soft coating of hairs acts as insulation to protect these early bloomers from cold temperatures. The species most commonly called pussy willows in the northeast, Salix discolor, is a small, shrubby species of willow that can be found dotting wetlands and most woods throughout much of North America.

Their blooms, also known for their delightfulness, usually signal the last throes of winter.

The petal-less male flowers are covered with pollen-bearing stamens. Catkins, as they are called, usually don’t rely on pollinators to spread their pollen. Instead, they simply release it into the wind, where it may or may not land on the female flower parts. In order to hit their targets, the catkins must produce a tremendous amount of pollen.

Pussy willows are dioecious, meaning there are both male plants and female plants. Only the male plants will produce the fuzzy flowers. Some home gardeners become disappointed once they learn they have a female tree. The flowers are equally pleasing, but look more like greenish hairy caterpillars.

Most cut pussy willow stems are in a sort of time warp – dried at their peak fuzziness, and never allowed to fully flower. But if you keep fresh-cut pussy willows hydrated, you can see the whole flowering cycle and even the leafing-out process. It is important to get healthy-looking bunches (look for flexible, greenish stems that don’t feel brittle or look shriveled), and place in a vase near a window, changing the water daily. You can add a little flower food if you have some. Watch for new flower buds to cast off the shiny brown bud scales that surround the flower. When the flowers mature, you will see many yellow stamens emerge to cover each catkin. Wait even longer, and you may also see pale green, strappy leaves unfurl from the leaf buds. At this point, your willow stems will be in full spring growth and will need to be planted in soil outdoors to root. They may or may not take.

In films, pussy willows are featured in a key part of the film Serial Mom, as one character, Beverly Sutphin, begins leaving clues to her identity for her neighbor Dottie Hinkle.

In literature, Pussy Willow, a children’s book by Maraget Wise Brown (1951), tells the story of a gray “pussycat not much bigger than a pussy willow,” who names himself Pussy Willow after the catkins he finds around him in spring. When the catkins disappear with the passing of the season, he goes in search of them, asking each different kind of animal he encounters where he might find them. The animals all answer from their own perspective. “Up in the air,” says the butterfly; “under a leaf,” says the squirrel. Pussy Willow finally finds them a year later when spring comes around again.

Pussy willows get their name for their resemblance to tiny cats’ paws, and they feel so much like fur that young children often wonder if they are animals instead of plants.

So, with the sighting of pussy willows on March 9, it is a sure sign that spring is imminent. Let’s hope so.

A friend of The Town Line recently told me of an incident she encountered in her own home. One day she opened the cupboard doors under her sink in the kitchen, and noticed these beady little eyes staring back at her. Startled at first, she stood motionless while the little critter stared back at her, neither moving for a moment. Finally, the little white ermine scurried off, probably from where it came.

As reported in this column in the February 14, 2019, issue, ermines, a/k/a weasels, have been finding their way into homes this winter. The first reports came from southern Maine. This recent sighting happened in China.

It seems to be a universal happening.

Which pitcher, originally drafted by the Boston Red Sox and traded to Baltimore before ever playing a game with Boston, returned for both of the Sox’ titles in 2004 and 2007?