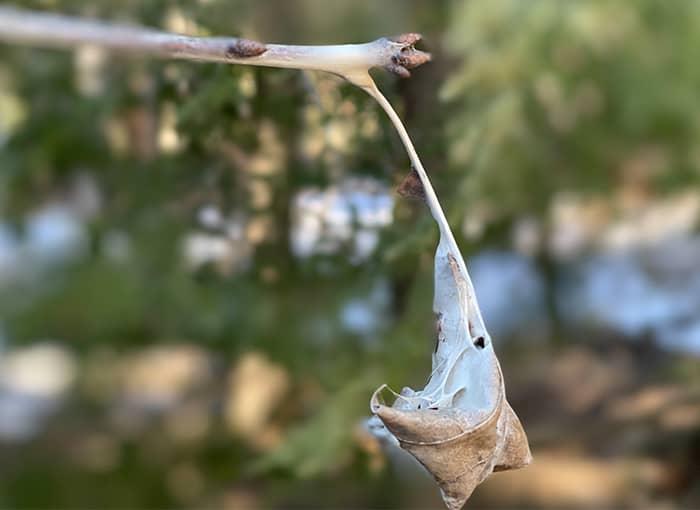 The browntail moth continues to be in a lot of conversations. Now that the caterpillar is all but gone, the moth is abundant, and is the carrier of the next generation. That is why experts say they need to be dealt with now before the next round of caterpillars are hatched.

After they were sighted in all 16 Maine counties, and countless Mainers itching the blistery rash, it appears the worst may be over for the year’s browntail moth caterpillar infestation.

In April, experts predicted this summer would be the worst for browntail moth caterpillar infestations since the invasive insect arrived in Maine 100 years ago. They were right.

The browntail moth is an invasive species found only on the coast of Maine and Cape Cod. Over the last few years, it has been moving inland. This moth is an insect of both forest and human health concern.

The browntail moth caterpillar has tiny poisonous hairs that cause dermatitis similar to poison ivy on sensitive individuals. People may develop dermatitis from direct contact with the caterpillar or indirectly from contact with airborne hairs. The hairs become airborne from either being dislodged from the living or dead caterpillar or they come from cast skins with the caterpillar molts. Most people affected by the hairs develop a localized rash that will last for a few hours up to several days but on some sensitive individuals the rash can be severe and last for several weeks. The rash results from both a chemical reaction to a toxin in the hairs and a physical irritation as the barbed hairs become embedded in the skin. Resp­iratory distress from inhaling the hairs can be serious. 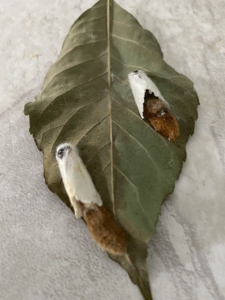 One of The Town Line’s supporters, while out for his daily walk, picked up this leaf from the side of the road. It is two browntail moths with the egg sacks attached. Inside each of those sacks are around 400 eggs.

Caterpillars are active from April to late June. Hairs remain toxic throughout the summer but get washed into the soil and are less of a problem over time.

Pursuant to Maine Statute Title 22, §1444, the Director of Maine CDC can declare an infestation of browntail moths (BTM) as a public health nuisance. The declaration may be made on the director’s initiative or upon petition by municipal officers.

I’ve spoken with folks who believe there will be another round of browntail moth caterpillars and their toxic hairs this fall.

Usually, when I write about certain creatures of the forest, I rarely go into great detail on the reproductive cycle, mostly because of space. But I’m making an ex­ception this week so we can see why now is the time to act on browntail moths.

The brown-tail moth produces one generation a year. It has four life stages; egg, larval, pupal, and adult. Eggs are laid in July and hatch in August. The annual cycle is approximately one month as eggs, nine months as larvae, one month as pupae, and one month as winged, sexually mature adults.

Diapausing larvae: As a response to shortened periods of daylight, larvae build communal winter nests in the fall, inside of which they overwinter. These involve webbing, binding leaves together at tree-top branch tips. Distinct from other communal moth larvae such as eastern tent caterpillar which over-winter as eggs, then create webbed nests in branch crotches during spring and summer. Should you see a nest, cut it down and, preferably, burn it.

Post-diapausing gregarious larvae: The emerging larvae, approximately three-eighths of an inch long, resume feeding in early April synchronized with bud break, and still inhabit the winter nests as their resting places, or else make communal web-nests. These small larvae will also detach from trees and fall to the ground, then search for new trees.

Pupation: Larvae pupate in June after six to eight instars.

One of the remedies going around right now calls to fill a bucket with Dawn dishsoap (only Dawn will do) and water. Place a light near the bucket to attract the moth, which is nocturnal but attracted to light. The moths will fall in the bucket, and the soap will prevent the moth from taking flight. In the morning, dig a hole and bury the moths. Some friends have tried it and they say it works.

Well, it’s July and guess what usually happens: the cicaeda made its first appearance of the year on Saturday, July 17. We only heard it twice, but it was there. You know the old folklore, when you first hear the cicaeda’s call, the first killing frost will occur 90 days later, following the full moon, which this year, puts that date at October 20.

Isn’t it awful to be talking about frost already.

Last week, I received another email from a reader reporting a Mountain Lion sighting. The email stated: “This week, a large cat was creeping across our property as my wife was letting out our [German] shepherd. The shepherd doesn’t chase deer but gave a hard chase of what I assumed [at first] was a bobcat. My wife said the cat was tawny [in color], had a long tail and was the same size as our shepherd (75-80 lbs.).”

It seems there have been more frequent sightings recently, but the “experts” continue to dispel their existence in Maine.

Which Red Sox pitcher has recorded the most wins at Fenway Park?