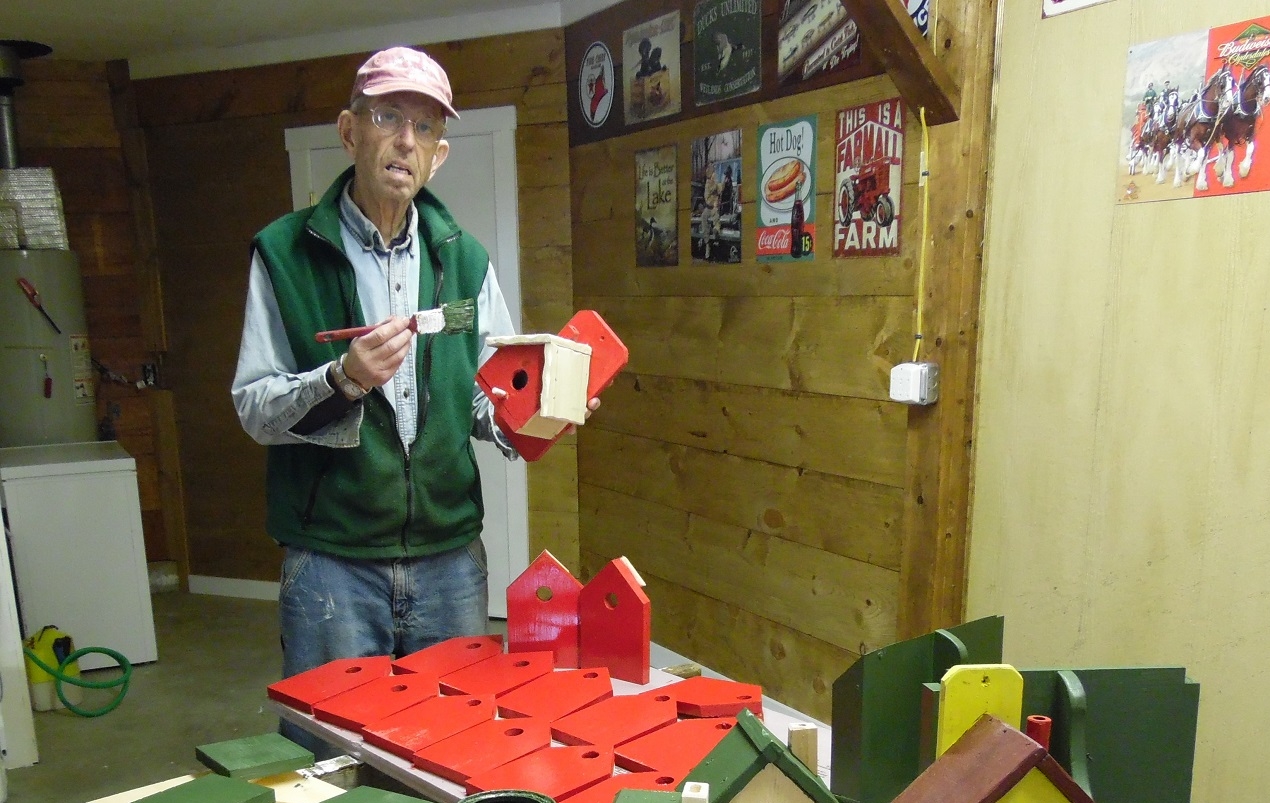 Clinton Hayward at work in his woodworking shop. (Contributed photo)

“More than a billion birds have disappeared in recent years,” says South China resident Clinton Hayward, a local conservation activist who has established five chapters of Ducks Unlimited across Maine and has spent 70 years birdwatching and following the research on bird populations in North America.

Hayward’s latest project is to build and install 100 birdhouses across the expansive property owned by his daughter and step-son on Three Mile Pond. So far, Hayward has finished 30, but hopes to reach his goal of 100, working mostly on rainy days over the next year. 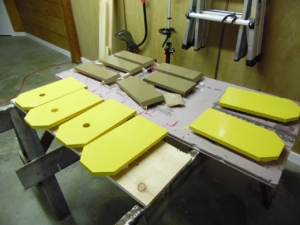 “This has been a lifelong interest of mine,” he says. “[I’ve] always [been] fascinated with anything that has feathers.” Growing up on a farm in Calais, Hayward was constantly surrounded by flocks of chickens, ducks, geese, turkeys and pigeons. Over the last half-century, he has watched, with rising alarm, as bird populations have steadily decreased across North America.

Recent scientific research backs up Hayward’s lifelong observations. A 2019 study by researchers, published in the journal Science, found that North America’s bird populations have declined by roughly 30 percent over the last half-century. That’s nearly three billion fewer birds flying in our skies today than in 1970.

“I am convinced this is not a short term cyclical problem,” Hayward says, “but rather a long term gradual decline that may be irreversible.”

According to the referenced study, the most affected species are small birds whose habitat are grasslands. Hayward agrees. “My observations lead me to believe that the problem is more acute with small birds, especially song birds,” he says. Much of the decline is a result of the destruction of important nesting areas that have been converted for agriculture, but Hayward thinks insecticides play a major role as well.

“The spray can affect the birds directly or indirectly when they eat dead insects that have succumbed to the spray,” he says. “Squirrels are also devastating, along with other rodents who very much enjoy eating bird eggs, but insecticides are doing the major damage in my opinion.”

Waterfowl such as ducks and geese have been less affected as a result of early conservation efforts in the U.S. and Canada. “I do not feel that waterfowl are currently under the same threat as most other bird species,” Hayward says, “because organizations like Ducks Unlimited, The Nature Conservancy and others responded long ago to the waterfowl population crisis in the dust bowl days of the 1930s and ‘40s, when waterfowl populations were all but wiped out and lack of habitat took its toll. By spending millions and millions on habitat projects in North America, the species have responded and thrived.”

It’s not just the bird population that is at risk, believes Hayward. “Bat populations are also in extreme difficulty,” he says. “Just a few short years ago, I could count hundreds and even thousands of bats doing their work at dusk. Now, I see almost none. I believe the spraying for insects is probably responsible since they live primarily on insects.”

Anyone can help put up birdhouses to provide additional habitat-space for visiting birds, but it’s important to educate yourself about the kinds of birds that visit your property and their specific needs before getting started. 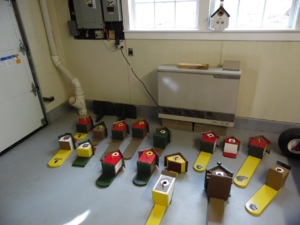 A look at some of the birdhouses Hayward has finished. Contributed photo.

“Many people who put out bird houses do not pay particular attention to the dimensions of the house, the size of the portal hole, etcetera,” says Hayward. “Different species of birds prefer different size cavities and openings. For instance, if you are seeking to attract wrens, you would want a small, four-inch by four-inch house with a one-inch to one-and-an-eighth inch opening and the portal hole about eight to nine inches above the floor.” He adds, “Many fledglings have a problem exiting bird houses when they are getting ready to learn to fly. Placing a strip of screening below the portal will assist fledglings in getting to the portal.”

It’s a good idea to carefully observe the birds that visit your property before deciding which bird houses to install. Hayward recommends that interested readers consult the U.S. Fish & Wildlife Service pamphlet For the Birds, which can be found here: www.fws.gov/birds.

Clinton Hayward, a master gardener, often does site visits to provide assistance or offer advice on garden design and proper selection of plants to make a property bird friendly. He is happy to share his experiences or offer advice for others who might be looking to make their own properties more habitable for our visiting feathered friends. He can be reached by email at clntnhayward@gmail.com.

Eric W. Austin writes about local community issues. He can be reached by email at ericwaustin@townline.org.