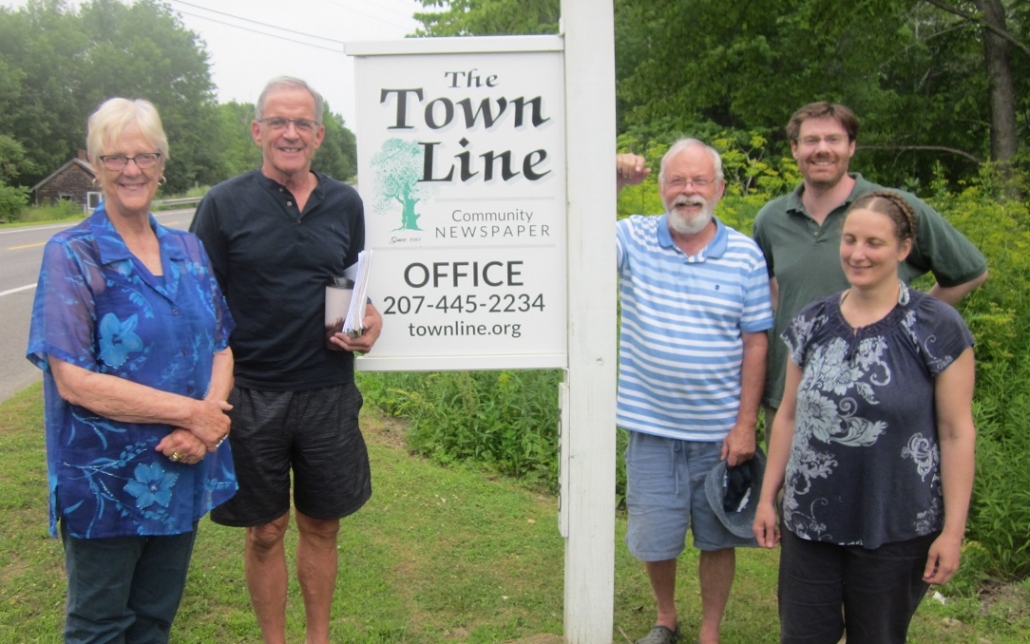 The brain child of Gary and Trish Newcomb, of China, the newspaper’s goal was to bring neighbors and their respective towns closer together through better communications.

Area towns and their residents had gone through some turbulent times during the mid-’80s when much animosity had grown to epidemic proportions. Gary and Trish fig- ured that if people really knew what their neighbors were doing, they would better understand each other.

Although the original mission statement for The Town Line can’t be found, its general meaning is how the newspaper got its name. Gary and Trish believed that if every- one was more open in their communications, they could all become better neighbors, and asked people to take their discussions, differences and ideas, and meet at “the town line.”

Preparing that first issue was a monumental task. First there was equipment to purchase, acqaint themselves with computers and their programs, find a printer, and then arrange a distribution system.

Once the first issue hit the streets, Gary said, “How will be ever put out another issue?” He thought he had used up all possible material in that first issue. Well, miracles happen, and now, 32 years later, The Town Line newspaper has published 1,587 issues.

Gary and Trish nurtured the newspaper for the first nine years, until, thinking they had taken the paper as far as they could, put it up for sale in 1997. The final issue under the guidance of the Newcombs came on December 20, 1997.

The original staff consisted of three people. The first issue denotes the Newcombs as both publishers and editors. Trish was advertising director and Gary took care of the graphic designs. Julie Dermott was administrative assistant.

As time passed, and the newspaper grew, additional staff members were needed to accomplish the work. On May 16, 1990, Susan Cottle became the first editor other than the Newcombs. She would continue in that capacity until the end of 1991. Joe Lupsha and Fred Davis each served as assistant editor during this period.

On January 6, 1992, Lea Davis was named the second editor in the paper’s history. Lea would continue as editor and eventually as managing editor until May 14, 2004, the longest tenured editor in the history of the paper at the time.

During her time, the paper went through a series of setbacks due to changes in ownership. After the Newcombs closed the paper at the end of 1997 for a lack of a buyer, Dennis Keller came on the scene and purchased the assets. The paper reopened its doors on January 31, 1998.

The paper would continue on its normal path until July 3, 1998, when it became a bi-weekly (once every two weeks) due to economic hardships. Keller would eventually close the doors on October 10, 1998.

That’s when the paper’s future took an unexpected turn for the better. A small group of former staff and some interested community members worked through the winter of 1999, formed a new plan and incorporated the publication as a 501 (c)(3) nonprofit organization.

Spearheaded by Joann Austin, Faith Ames, the late John Robie, staff members Lea Davis, Sandy Keller and Roland Hallee, all of whom donated their time, the groundwork was ready to continue towards re-opening the paper.

On March 6, 1999, The Town Line re-emerged as the voice of these small central Maine towns. Through great community support, both from businesses and small grants from the towns, The Town Line firmly planted itself back on the path to recovery. The Town Line is now a nonprofit private foundation with a board of directors as overseers. The current members of the board of directors are Joann Austin, Eric Austin, Neil Farrington, Emily Cates, Dan L’Heureux, Jeanne Marquis and Steve Ball.

Others to have served on the board in the past have included Gladys Hewett, Phyllis Thorne, Sam Birch, Margie Roy, the late Joe Pinette, Walter Wilson, Mike Mara, Faith Ames, Dick Kelley and Joe Suga, among others.

On June 1, 2004, Susan Varney became the third editor in the newspaper’s history. She would continue in that position until February 2005, when upon her departure, Roland Hallee became the fourth editor and second managing editor of The Town Line. He continues today as the managing editor and is now the longest tenured staff member of The Town Line, having begun his tenure in May 1993 – a span of 27 years. With 56 years of newspaper work, and editor of two other newspapers, in Pittsfield and Skowhegan, he has used his experience to guide The Town Line through some dark days.

Over the 32 years, The Town Line has occupied five different locations. The original site was at the old fire station, next to the old post office off Rte. 3, recently occupied by Whitt’s Garments.

From that location, they moved in January 1994 to a building on Rte. 3, across from the new South China Post Office, now occupied by Legacy Home Improvement. They would remain there only a short period of time before relocating in June 1995, to the 202 Plaza, on Rte. 202.

Upon its reopening as a nonprofit in 1999, they were located in the lower level at Jonesbrook Crossing, in South China. They would remain at that site until November 2008, when they moved upstairs in the same building in the space formerly occupied by Fernald Family Chiropractic. In October 2017, the move was made to its present location, the lower level of the old China Town Hall, in China, near the town office. All of the locations were in South China.

Through the years, others were instrumental in the success of the paper. Susan Boody, Adam Hansen, Troy Henderson, Carl Mercier, Paul Basham and Diane Bickford have all served as advertising directors. Kathy Duhnoski is the present ad director. Advertising salesmen over the years have included Ken Nawfel, Betsy Murphy, Martha Holzwarth, Aileen Wescott, Marlene Myers and Bill Zinck, among others. Office managers have included Heide Hotham, Sandy Keller, Sylvia Martin, Marilyn Boyle and Angela Brunette. Claire Breton has been business manager since 2000. Prior to that, business managers have included Ed Heath, Natalie Lyon and Adam Hansen. Others to contribute as graphic artists have been Fran Vitolo, Susan Walter, Dirk Rose, Roland Hallee and Kareno Stansbury. Lyn Rowden served as senior staff writer from 2006-2013, a position now held by Eric Austin.

Intertwined with all of these people is an endless list of regular contributors and volunteers.

Legion auxiliary pie sale a great success, raises over $1,000 Up and down the Kennebec Valley: Newspapers of Central Maine – Conclu...
Scroll to top