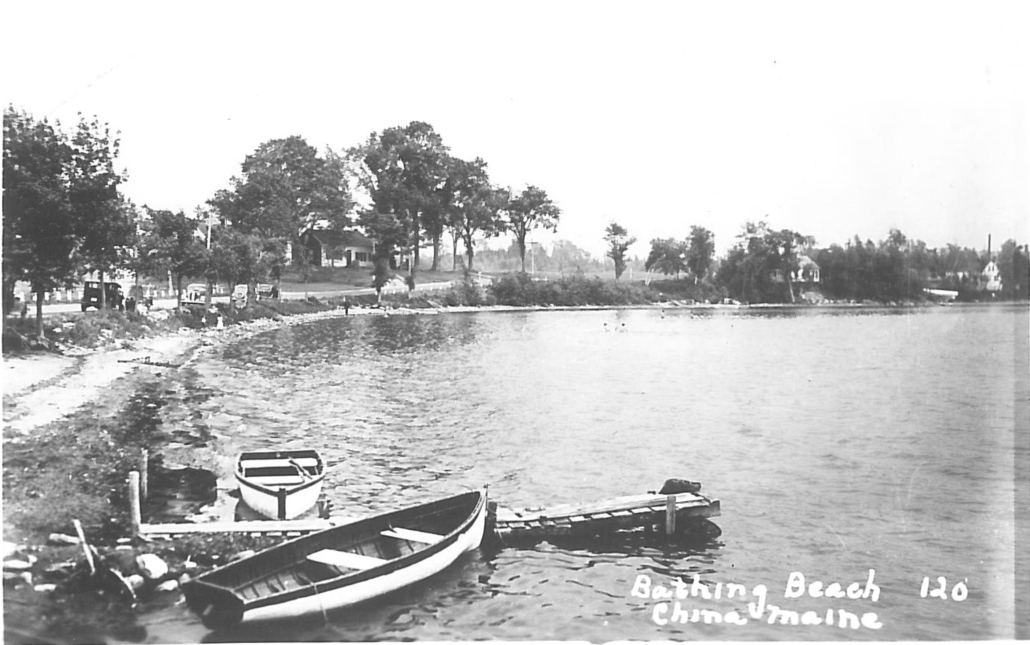 A bathing beach on the Causeway, at the Head of the Lake, across from the China Baptist Church. (photo from the Bicentennial History)

China Lake is an important area resource for year-round recreation; drinking water in municipalities served by the Waterville-based Kennebec Water District; and, given the high value of waterfront property, taxes for the Town of China.

The United States Geological Survey (USGS), on an undated (but later than 2006) website, says China Lake has an area of 3,845 acres. The Maine Lake Stewards website puts the area at 3,949 acres. Other sites translate the acres to 6.155 square miles or 1,594 hectares.

The USGS and the Lake Stewards agree on a maximum depth of 85 feet, which the USGS says is in the circular west basin, which is mostly in Vassalboro. The long, narrow east basin has a maximum depth of 50 feet, according to the USGS.

There are five mapped islands in China Lake. Bradley Island in the west basin is owned by the Town of China. In the northern half of the east basin, from north to south, are: Green or Bailey on the west, almost side by side with Moody or Teconnet on the east, both privately owned; the privately-owned island listed on China tax maps as John Jones Island; and tiny Round or Indian, owned by the China Baptist Church. Pastor Ronald Morrell says the church welcomes visits to Indian Island by groups and individuals who are respectful of the environment.

The east basin is surrounded by private homes, year-round and seasonal, many on lots covering a fraction of an acre and with 100 feet or less of water frontage. For comparison, standards in China’s current land use ordinance require a minimum 40,000 square foot lot (one acre is 43,560 square feet), at least 200 feet of shore frontage and space to set buildings at least 100 feet from the high-water line. Lots and buildings that don’t meet contemporary standards may continue as they are, but cannot be enlarged or otherwise changed (with a few exceptions).

The Kennebec Water District owns most of the shoreland around China Lake’s west basin in Vassalboro and western China and keeps it undeveloped to protect water quality.

[See also: The history of the Kennebec Water District]

As noted in the May 28 story about the town of China, the area around the lake was first surveyed and settled in 1775. The China Maine Bicentennial History including 1984 revisions (1984) says numerous varieties of fish supplied food for early settlers and still support a year-round recreational fishery. Before electric refrigerators became common in the early 1900s, local residents cut ice from the lake for personal iceboxes.

Like rivers, lakes are transportation avenues summer and winter. The Bicentennial History mentions a ferry connecting the end of Neck Road with South China in the 1850s. From the 1880s to the 1920s, commercial boats offered lake tours. Piers were built outside China Village and in South China and East Vassalboro. The long China Village pier, known as the clubhouse pier, had a shelter with benches at the end.

Boats’ stopping places included a dance pavilion near the shore in South China and Bradley’s Island. The Bicentennial History says in February 1879 the Maine legislature gave Albert M. Bradley, owner of the Revere House, in East Vassalboro, a 10-year exclusive right to operate passenger steamboats on the lake. He and his son, William Bradley, owned the steamboat Una and by the 1890s had built an amusement park with outdoor games and a 100-seat dining room on Bradley’s Island.

The last of China Lake’s big commercial boats, the Bicentennial History says, was Everett Farnsworth’s 35-foot Frieda. For about 10 summers, beginning in 1909, the Frieda made twice-daily trips starting in China Village and visiting South China and East Vassalboro. The schedule was regular enough that lakeside residents could hail Farnsworth as he went by and get a ride.

In the winter, China Lake was a highway for sleighs and later automobiles, as it is now for snowmobiles. The Bicentennial History includes an anecdote attributed to a native: two early vehicles, Model T Fords or contemporaries, collided in mid-lake on a clear winter day with no other traffic to distract their drivers.

Summer residents began arriving in the 1880s and 1890s. Early clusters of summer homes were around South China and off Neck Road, the Bicentennial History says; most summer places along the east shore were built in the 1920s and 1930s.

The Bicentennial History says the first children’s summer camp on China Lake was Camp Teconnet for Girls, founded in 1911 on Moody or Teconnet Island by Massachusetts residents who also ran a boys’ camp in Unity. Camp Teconnet operated until 1925. Campers and staff patronized the general store in China Village, and every summer they presented an evening’s entertainment in the village to benefit a local cause.

The co-ed Friends Camp opened in 1953 and is still in operation under the auspices of the New England Yearly Meeting of Friends. It started in the historic Pond Meeting House, built in 1807 and used for services until 1915. New buildings were added on the Lakeview Drive property from the 1950s on, plus a bathhouse on the Friends’ lakeshore lot where campers and staff take part in water activities.

Frederick Hussey founded Camp Abenakis (1929-1939) for boys on the Pond Road (Lakeview Drive) about three miles south of China Village. The Bicentennial History describes camp activities, based on an interview with Hussey.

China’s second religious camp is on Neck Road across the lake from the Friends Camp, using the grounds and buildings of the former China Baptist Conference Center. According to the history on the China Lake Camp website, the United Baptist Convention of Maine bought a former farm in 1961 and in 1962 opened the China Area Baptist Camp. Buildings were added over the years, but the property never became the year-round destination conference center its founders envisioned. Since 2008 it has been a Christian summer camp hosting different age levels and interest groups at different times.

Farther south on Neck Road, another boys’ camp, Bel-bern, was started in the 1930s by Saul Greenfield, from New York, who built most of the buildings and furniture. After Greenfield’s death about 1950, the camp closed. In 1956 Warren and Doris Huston, from Massachusetts, reopened it as Camp Ney-a-ti and, according to Doris Huston’s May 2005 obituary, ran it for 16 years. Camp Ney-a-ti was still operating in 1984, directed by Robert True and Bradford Harding. By then the property consisted of about 100 acres on both sides of Neck Road.

A yellow and black highway sign in a tree near Camp Ney-a-ti’s driveway read “Cool It.” The Bicentennial History explains that after the road was paved in 1963, traffic went faster; and after the directors built a ballfield on the west side of Neck Road, they worried about campers’ safety crossing the road. Conventional pedestrian warning signs were ineffective, but the Bicentennial History quotes Harding as saying the new sign didn’t merely slow motorists, it made them “back up to make sure they read what they thought they read.” 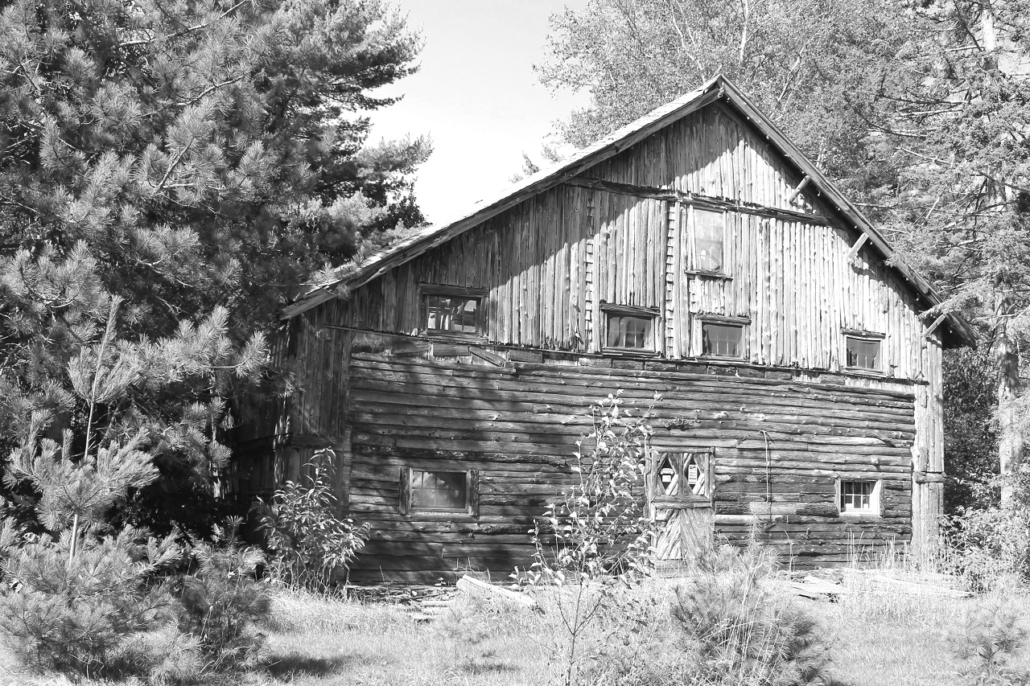 The Killdeer Lodge at it appeared in 2017, minus the roof over the porch which collapsed several years ago. Left, the lodge as it lays following its razing in October 2018. (Photo by Bob Bennett)

The Bicentennial History lists four former tourist businesses on the east shore of China Lake’s east basin. From north to south, they were: Willow Beach Camps, started in 1936, where the China Food Pantry is now located; Candlewood Camps, also started in 1936 as Cole’s and later Lakeview before it became Candlewood, probably in the 1950s; Killdeer Lodge, part of a recreational and development project started in 1929 on Lakeview Drive and Killdeer Point; and Cony Webber and George Starkey’s four lakeshore rental cabins opened in 1937, about opposite the present MAJEK seafood restaurant, on Lakeview Drive.

China Lake has no public swimming beach. In an effort to implement part of the town’s comprehensive plan, a Lake Access Committee developed a proposal to buy the former Candlewood Camps property. At the polls on Nov. 5, 2013, voters rejected spending $575,000 for the property by a vote of 314 in favor to 1,004 opposed.

The China Baptist Church at the head of the lake has a small waterfront park, which Pastor Morrell says welcomes courteous guests. The China Four Seasons Club owns a beach for its members part-way down the east shore.

There are two public boat launches, one at the head of the lake east of the causeway bridge and one in East Vassalboro south of the Civil War memorial. A former boat launch in South China is no longer maintained.