Fairfield, the southernmost town in Somerset County, differs from Augusta, Vassalboro/Sidney, and Winslow/Waterville in being surveyed and settled only on the west bank of the Kennebec. However, the Charles Hayden survey map copied pursuant to a Feb. 4, 1813, vote of the Kennebec Proprietors and published in the Fairfield Historical Society’s Fairfield, Maine 1788-1988 shows a pattern similar to the towns farther down-river: smaller rectangular riverside lots and wider, much longer (some extending from the river to the 15-mile boundary) lots between and behind them.

The history says the first recorded house in town was built in 1771 by Jonathan Emery on Emery Hill. His son Samuel, born in 1773, is believed to be the first white child born in town. The house stood until 1982. 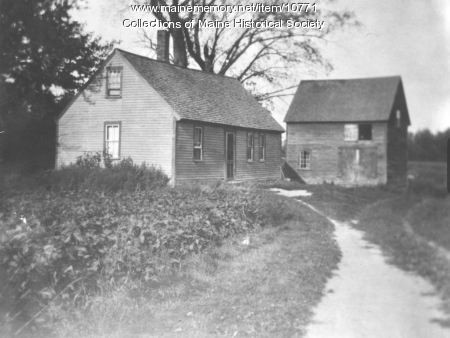 Emery Hill rises from the Kennebec between the river and Route 201 north of downtown Fairfield, opposite the foot of Mountain Avenue. The Emery Hill Cemetery is said to contain graves of some of the men who began the march to Québec with General Benedict Arnold in 1775. When this writer knew it in the 1950s, it also contained a good crop of poison ivy.

More families must have quickly followed the Emerys, because the bicentennial history reports the settlement was organized as a plantation in 1774. Ava H. Chadbourne’s Maine Place Names says the plantation was named Fairfield because of its natural beauty, and the name was carried over when the plantation became an incorporated town on June 18, 1788.

In 1774, according to the bicentennial history, a man named Pushard built a log cabin on the north side of what is now Western Avenue where Hillman’s Bakery was established in 1960.

In 1778, the history continues, Jonas Dutton built a dam between the west shore and Mill Island, the westernmost of the two islands – the other is Bunker’s or Bunker Island – between Fairfield and Benton. Dutton planned to use waterpower for mills, he did not get them built before General William Kendall bought him out in 1780. Kendall also bought adjacent land, making Kendall’s Mills an early name for Fairfield Village. Ernest Marriner says in Kennebec Yesterdays there were 11 sawmills at Kendall’s Mills in 1870.

According to the web, Kendall was born in Georgetown, November 19, 1759, married Abigail Chase on Dec. 25, 1782, died Aug. 11, 1827, and is buried in Emery Hill Cemetery with his wife and other family members. The bicentennial history adds that the Kendalls lived first in a log cabin near the present intersection of Main Street and Western Avenue. Before 1800 they had a large brick house at the intersection of Lawrence Avenue and Newhall Street, which stood until the 1890s.

Chadbourne and the bicentennial history list other centers of settlement inside the town boundary as Shawmut (earlier Philbrooks Mills, Lyons Mills, Somerset Mills; settled in 1835) and Hinckley (East Fairfield, Pichon’s Ferry), three miles and eight miles, respectively, north of Fairfield on the river; Fairfield Center, three miles west of the present town center; North Fairfield (also known as Black’s Mills, Blacknell’s Mills and Quakertown, according to the bicentennial history), north of Fairfield Center; and Larone (formerly Winslow’s Mills) on what is now Route 139 almost at the Norridgewock town line.

The bicentennial history calls Fairfield Center the first town center, despite its distance from the river, because, the authors say, it was on the road from Waterville to Skowhegan. 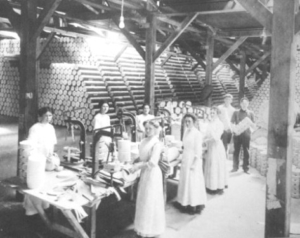 Chadbourne fails to mention Fairfield Corner (now Nye’s Corner), on the river about half-way between Shawmut and Hinckley. No date of settlement is given; the bicentennial history says it was named for multiple Nye families and was a commercial center in the 1820s and 1830s.

In Kennebec Yesterdays, Marriner draws from the 1848 reminiscences of Elihu Bowerman, who came north from Massachusetts in 1780, at the age of 18, looking for available land. He stayed with John Taber, in Vassalboro, and joined the Quaker meeting there.

Marriner says Taber and other Vassalboro Quakers helped Bowerman find his land. Early in 1782, newly married, he, his wife and two younger brothers came to stay. Leaving Mrs. Bowerman in rented rooms in what became Waterville, the three young men staked a claim along Martin Stream, in the area known later as North Fairfield. They built first a lean-to and then a log cabin roofed and floored with bark, to which Mrs. Bowerman came in the fall.

One of Elihu’s brothers went back to Massachusetts for the winter of 1782-83. Marriner suggests the remaining three people might have starved had not a Winslow man given them corn on credit to supplement a bit of pork and smoked herring and the (frozen in an early cold spell) potatoes they had raised on Remington Hobby’s Vassalboro farm. The corn they carried 17 miles, on foot, to be ground at the closest gristmill, Marriner says.

During the winter, too, the two men hauled 700 feet of boards “several miles” from a sawmill so they could provide a better roof and floor for the cabin.

The next summer they bought two cows to provide milk and butter and planted crops to feed them through the following winter. It was probably that summer that Elihu’s mother came from Massachusetts to join them. By 1785, Marriner says, the older Mrs. Bowerman and eight of her nine children – one daughter had died –were living in the area.

Marriner credits the Bowermans with establishing the Friends meeting in North Fairfield. At first it was affiliated with the Vassalboro Friends, and Elihu Bowerman remembered the 14-mile walk to and from meeting before roads were fit for horses and later for carriages. The trip required fording or rafting across the Sebasticook and the Kennebec rivers.

After the June 1788 incorporation of the town of Fairfield, the bicentennial history says the first town meeting was held Aug. 19 in Samuel Fuller’s house. Elihu Bowerman was elected selectman, with Josiah Burgess and Joseph Town; Samuel Tobey became town clerk and treasurer. 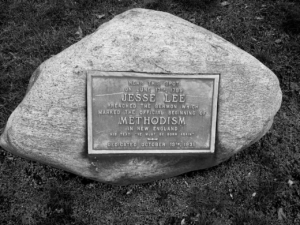 Jesse Lee’s marker in Norwalk, Connecticut, marking the spot of his first speech.

Jesse Lee, sometimes called the Apostle of Methodism, was a Methodist Episcopal preacher who traveled northern New England in the 1790s. Born March 12, 1758, in Virginia, he became a preacher in 1783. After his travels in New England, he was chaplain of the United States House of Representatives, starting in 1809 and serving at least three terms, and in 1814 began a year as chaplain of the United States Senate. He died Sept. 12, 1816, in Baltimore, Maryland.

The Jesse Lee Church, in Readfield, built in 1794, was added to the National Register of Historic Places in 1984. Kents Hill resident Les Priest said Lee preached at the dedication of the church on June 24, 1794, with close to 2,000 people from all around the area attending.

The church is still used seasonally; the web has information on the April 12 Easter Sunday service. Members of the Readfield United Methodist Church had the historic building reroofed five or six years ago, Priest said. They are now raising money to redo the exterior. Donations are welcome; checks may be made out to RUMC and mailed to PO Box 286, Kents Hill, Maine 04349.