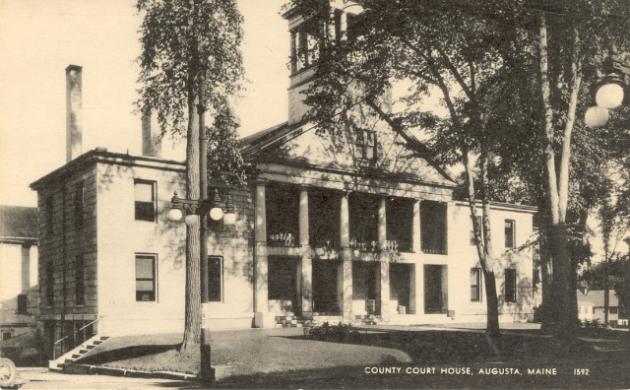 The City of Augusta has 44 listings on the National Register of Historic Places, but some overlap. Nonetheless, the capital city has a substantial share of the 136 historic places in Kennebec County.

Some of the buildings are private houses built for, owned by or otherwise connected with prominent individuals and families. Many public or formerly public buildings are also on the list.

Four of Augusta’s designated historic sites (and Fort Halifax, in Winslow) are also on the National Park Service’s list of National Historic Landmarks. They are the Cushnoc Archaeological Site, Fort Western, the Kennebec Arsenal and the Blaine House. 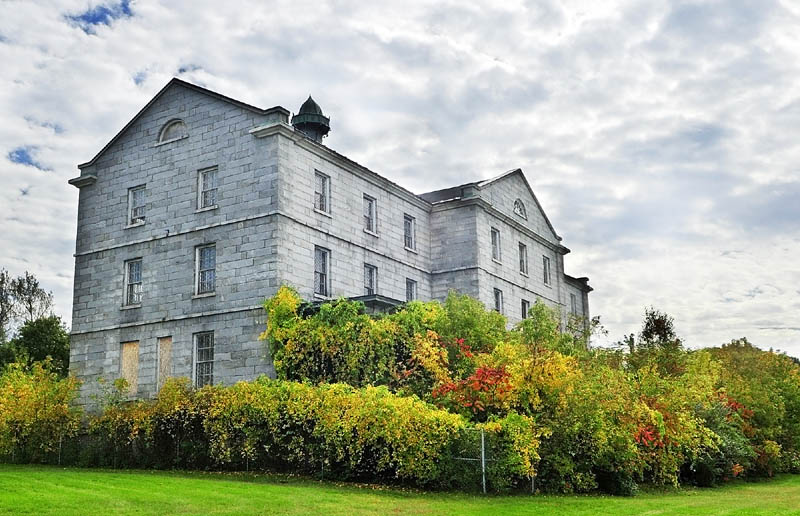 According to the National Register on-line list, the earliest Augusta listing, on Oct. 1, 1969, was the Arnold Trail to Québec. Three buildings were recognized in 1974: the Kennebec County Courthouse at 95 State Street, the Lot Morrill house at 113 Winthrop Street and the Old Post Office and Court House at 295 Water Street.

The most recent is listing is the Hartford Fire Station, at 1 Hartford Square, listed on Jan. 1, 2018.

The Arnold Trail marks Colonel Benedict Arnold’s march to Québec in 1775 with an army of 1,100 men. This unsuccessful attempt to capture the British stronghold has been commemorated in history books and in the novel Rabble in Arms by Maine writer Kenneth Roberts. The Daughters of the American Revolution placed markers along the trail from Pittston, south of Augusta, to Eustis, almost on the Canadian border.

The marker in Pittston, on the east bank of the river, was placed in 1913 at the site of Arnold’s headquarters at Major Reuben Colburn’s house. In preparation for the expedition, General George Washington directed Colburn to send scouts up-river to evaluate the route and watch for British spies. An on-line site says the two men were Samuel Berry and Dennis Getchell, from Vassalboro.

Washington also ordered a fleet of 200 bateaux equipped with both paddles and poles. (A bateau is a flat-bottomed boat designed for use in shallow water; photographs of 20th-century reenactments show Colburn’s craft with high flared sides and pointed bows and sterns.) Workers at Colburn’s shipyard built the bateaux, using green lumber; the boats leaked copiously, soaking the expedition’s supplies of food and ammunition. 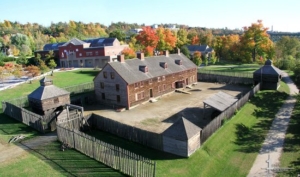 Arnold moved his headquarters north to Fort Western on Sept. 23, 1775. Another on-line site shows a marker and a photograph of a punch bowl Arnold is said to have used at the fort.

The DAR installed the next marker up the river in 1919, on the east bank across from the Winslow Congregational Church to mark the expedition’s landing place on Sept. 26, 1775.

Two more markers had been installed in 1917 on the west side of the river. One is in Waterville’s Castonguay Square to show where the soldiers re-embarked after carrying their bateaux around Ticonic Falls. The other is in Fairfield, at the intersection of Willow Street with Route 201 and Upper Main Street, between downtown Fairfield and Interstate 95; it marks one of the places where soldiers stopped to repair the bateaux.

The Kennebec County Courthouse, another early listing, is at 95 State Street. On-line sources say it was designed by architect James Cochran and built in 1829 by Robert Vose, under Cochran’s supervision.

The two-story granite building is in early Greek Revival style, with Doric columns across the front on both levels. The center block is topped by a wooden belfry. When the bell tower was restored in 2000, a plaque was added dedicating it to legal personnel and others “who under this tower have contributed to the impartial and effective administration of equal justice under the law.”

The original courthouse was enlarged twice, in 1851 and in 1907, in each case using granite and taking care to preserve the architectural style. The architect for the 1907 addition was almost certainly George Henri (or Henry) Desmond (1874 – 1965), of Massachusetts. Desmond also worked on the 1911 expansion of the capitol building.

Augusta sessions of the Maine Supreme Court were held in the courthouse for 140 years, from its opening in 1830 until 1970.

Between 2012 and 2015 a modern judicial center was built on the east side of the old building, connected by a skywalk. That building was designed by PDT Architects, of Portland, (since 2019, CHA Architecture). Most court business is now conducted in the new building. 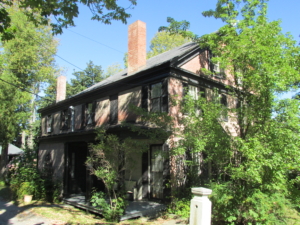 The two and a half story brick Lot Morrill house on Winthrop Street is also an example of Greek Revival architecture, built about 1830. Lot Myrick Morrill (1813-1883) was born in Belgrade. He was a lawyer who entered politics as a Democrat and temperance advocate and was elected a Democratic state representative in 1854.

In 1856, he switched to the anti-slavery Republican party and served as a state senator in 1856 and as Maine’s 28th governor from January 1858 to January 1861. He represented Maine in the United States Senate from January 1861 (when Hannibal Hamlin resigned his seat to become vice-president under Abraham Lincoln) until July 1876, when he resigned to become President Ulysses Grant’s Secretary of the Treasury.

Nelson was born in China (Maine) and educated in Waterville and at the Friends School, in Providence, Rhode Island. He graduated from Colby College, Class of 1898, and earned a law degree from the University of Maine at Orono in 1904. He practiced in Waterville until 1913 and then in Augusta.

Nelson served as a Republican in the United States House of Representatives from March 1922 to March 1933, losing a bid for another term in 1932 and returning to his law practice until he retired in 1946.

Wikipedia says in 1931 the Fish Committee (chaired by New York Representative Hamilton Fish) recommended outlawing the Communist Party and taking other steps to discourage Communism. Nelson, a member of the committee, wrote a minority report describing the committee majority’s anti-Communism as hysteria and saying there was no serious domestic threat and no need for new laws.

The Lot Morrill house is currently owned by Sandor, a Maine-based Limited Liability Company, and is described on-line as a multiple occupancy building.

The old court house and post office at 295 Water Street is the third of Augusta’s earliest-listed historic buildings. One source lists it as the Olde Federal Building. Several sources call it Maine’s best surviving example of the Romanesque Revival style of architecture. It is built of Hallowell granite, two and a half stories tall, with a central tower, smaller side towers and dramatic arches at street level.

The building was designed by Mifflin Emlen Bell (1847-1904), described in Wikipedia as the supervising architect with the United States Treasury Department from 1883 to 1887, and his successor, William Alfred Freret (born Jan. 19, 1833, if any reader would like to give him a thought on the anniversary; died Dec. 5, 1911). It opened in January 1890. Wikipedia says it cost $178,281.20, and its conveniences included steam heat and a hydraulic freight elevator.

Augusta needed a large new post office by 1890 because of the volume of mail generated by publishing businesses in the city, including those of E. C. Allen, Peleg O. Vickery and William Gannett (see The Town Line, Nov. 12, 2020).

Architect Bell worked on the final stages of the Washington Monument and designed the federal buildings for the 1893 Columbian Exposition, as well as many post office buildings, including those in Keokuk, Iowa; Quincy, Illinois; Aberdeen, Mississippi; Auburn, New York; and Nebraska City, Nebraska.

Freret succeeded Bell when Bell resigned and served from June 1887 until either 1888 or March 1890 (Wikipedia gives both dates). He was a New Orleans native who had served in the Confederate army. Most of his other government buildings are in the South – post offices in Florida, Louisiana, Mississippi and the Carolinas, for example.

Wikipedia’s only reference to a Freret-designed building north of the Mason-Dixon Line is the former post office in Williamsport, Pennsylvania, now City Hall. It resembles Augusta’s old post office, and has been on the National Register of Historic Places since March 1972.

Augusta’s former post office and court house has not been used for federal government purposes since the 1960s. It is now a commercial building owned by Vickery Downing Associates Inc., of Yarmouth.

Bear Cub Scout receives religious emblem Kringleville 2020: The magic of Kringleville like no other season
Scroll to top