While traveling the back roads of Vassalboro the last couple of years, I noticed a drastic decline in the number of white-tailed deer sightings. There was actually one year – maybe the year before last – when I saw none at all.

Well, my hopes have been renewed about the state of the deer herd in this area. The last three days, I have seen deer every day. I truly welcomed sight.

So, what is the condition of the state’s deer herd?

According to figures from the Maine Department of Inland Fisheries and Wildlife, the mild winter we just experienced was very kind to the deer. The deer population in Maine is estimated at approximately 210,000, mostly in central and southern Maine. Although there are fewer deer in northern Maine, there tends to be some of the largest bucks in the state in that area.

Male white-tailed deer can weigh between 100 and 300 pounds.

The healthy state of numbers in Maine has prompted the wildlife regulators to increase the number of “any deer” permits they will issue this year to 45,000, up by 60 percent. Approval of the final number should be made next month.

Most of those extra permits will be issued in southern Maine where the white-tailed deer did particularly well to survive the winter. Maine is actually at the northern edge of their range.

I did some research and was a little disappointed when I learned that, according to some “experts,” Maine didn’t even make the top 10 list of the best places in the United States to hunt deer. That is probably due to the fact that deer are at the edge of their range here, and the number of permits issued, along with the large size, area wise, of the state. 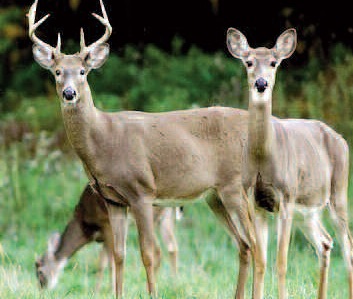 White-tailed buck, left, with a doe.

Wildlife regulators in Augusta say its necessary to keep the herd in check to prevent the herds from growing to the point where it becomes a problem. Unchecked growth can lead to deer-car collisions and food competition, which could result in starvation.

Back in the late 1990s, Waterville had a serious deer problem at the municipal airport, and were causing some anxious and dangerous moments when they wandered out on the runway. The herd had grown to large numbers. Since it is illegal to discharge a firearm within the city limits, archers were allowed to enter the area to help harvest the deer and manage the herd. Also, the habitat was altered in an attempt to force the deer to seek food and shelter elsewhere.

Coyotes and black bears are the main predators of fawns. It has helped protect the young deer with the fact that there is open season on coyotes, which means you can hunt them year round, but black bear hunting is restricted. However, today, dogs and humans are their primary predator. Because they don’t have many natural predators, deer populations sometimes grow too large for their environment and can cause death by starvation.

White-tailed dear, Odocoileus virginianus, have a way of protecting themselves during the winter months, like most other wildlife.

In winter, when the snow depths exceed 16 inches, deer will yard in stands of conifers, forming a central resting area with trails packed through the snow. This dense cover with adequate browse is essential for winter survival. They are herbivores and follow well-used trails to their feeding areas.

During the fall, with the coming of hunting season, is the time of year when deer breed. Females have a gestation period of seven months, and will produce one to three fawns, generally born in May and June.

The average hunting success rate in Maine is usually between 14 and 17 percent, with 84 percent of that coming during the firearms season. The firearms season generally attracts approximately 175,000 hunters.

But, with all that, it is good to see more deer in our area this year than I have noticed over the last two to three years. With a healthy deer herd, the influx of hunters brings about economic benefits.