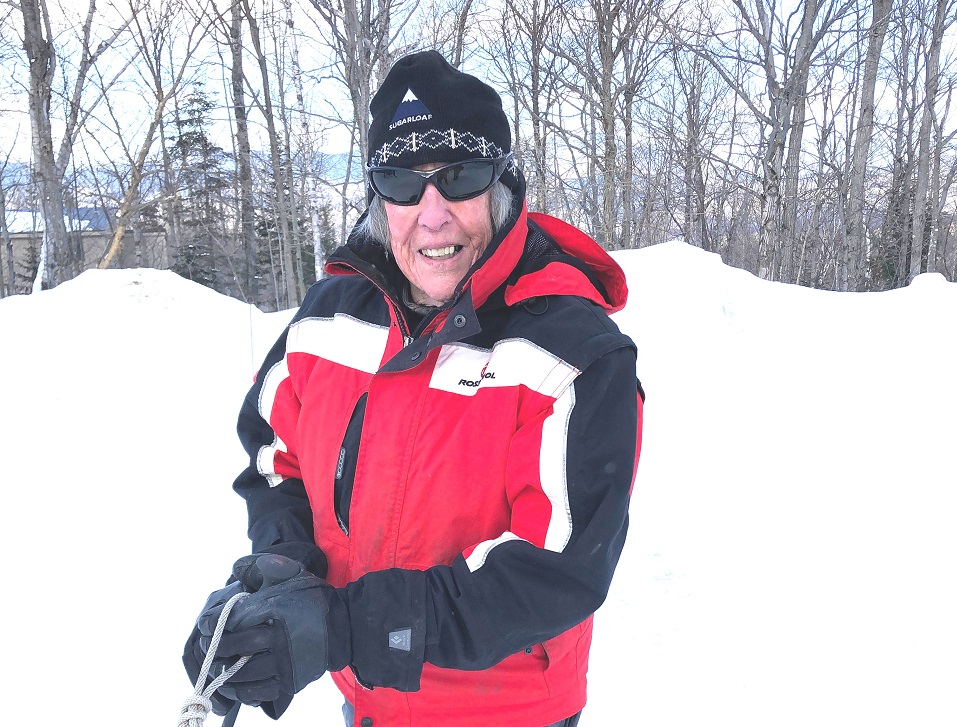 According to a published obituary, the family moved to Waterville in the early 1930s, where Natalie and her twin brother Don graduated from Waterville High School in 1941. She continued her education attending Thomas College and later worked at Keyes Fiber Company.

She was a natural athlete and took part in several sports including figure skating, diving and golf during her early youth. Natalie was one of the original skiers at Sugarloaf Mountain where she would skin up the only trail on the mountain with Amos Winter and several other local skiers.

In one of my last conversations with Natalie in the latter part of the 1999 ski season, she told me that this would be her last year as an instructor. “I’m 95, but I still plan to ski,” she said.

Natalie began her long skiing career at Sugarloaf around 1951.  “I was extremely honored at being recognized by the Maine Ski Hall of Fame in the Class of 2012,” she said.  She has worked with seven directors at Sugarloaf, Harry Baxter, Patrick Molignier, Russ Morey, Art and Cindy Hammond, Ken Everett, Paul Brown and Bob Matarese.

During the last 10 seasons teaching at the mountain, she consistently received the highest number of requested private and group lessons of any staff member.  When she was in her late 80s, she showed no signs of letting up.

Natalie said that she and her late husband Tim Terry, a Waterville businessman, along with friends at Sugarloaf climbed the mountain before there were any lifts.  “We used seal skins to hike up and then put them in packs as we skied down the Old Winter’s Way.”

An Austrian named Werner Rothbacher ran the Sugarloaf Ski School. Natalie and Tim had a camp near the ski area and Natalie often skied with friends in the ski school. In the spring they wore blue sweaters with gray stripes. It was the season of 1969-70 when Natalie officially joined the Sugarloaf Ski School. The school was under the direction of Harry Baxter, who later went on to manage Sugarloaf before moving to Jackson Hole. She remembers skiing on Tony Sailer skis during the first season with the school. Four seasons later she became fully certified.

“Being part of Sugarloaf for so many years has not only impacted my life, but my whole family’s life as well,” adding, “My soul is on that mountain.”

“I don’t remember not knowing how to ski, having learned when I was three,” said Sarah Carlson, Natalie’s daughter. “I do remember how happy I would feel at the end of a school day Friday, knowing that we were going to pack up the family station wagon and head to Brookside Cabin in Bigelow Village shortly after I got home. We would fire up the woodstove, chop a hole in the brook for water, read by gaslight lantern and go to bed early to be up and ready to head to the mountain.”

“In those days Sugarloaf was much like Titcomb Mountain, where I raised my family and where we live now. Everyone knew everyone else and my brother Geof and I were pretty free to roam the mountain with our friends. There was a little red lodge and only T-Bars to ride. My father actually started teaching before my mom. I remember her saying, “Mmmm, I taught you to ski, so maybe I should try teaching, too!” And the rest, as they say, is history.

During the Christmas blizzard of 1968, my mother, brother, and I were having a blast skiing powder that was getting ever deeper. Every time we came down for a run the lift operator, who knew us well, mentioned that we should probably get on the road. Eventually, we tore ourselves away from the mountain, but only made it to Kingfield where we did our traditional stop at Harvey Boynton’s to say hello. My father, who was in Waterville, had been calling up and down the valley trying to tell us to stay put. The roads were closed by that time, so we spent Christmas Eve at the Herbert [Hotel, in Kingfield] with many other stranded families.

My father did a solo week away in the winter of 1971. When we arrived on Friday evening he announced that he had been doing some research and he thought that buying a condominium was a good idea. We all replied with, “A condo… what?” having never heard the word before.

My mother was not so sure this condo thing was a very good idea, but once she saw it that next winter she fell in love with, particularly the view of the Bigelow’s. It was supposed to be a rental property, but after I started participating in the Sugarloaf Tutorial Program (which eventually became CVA – Carrabassett Valley Academy), she decided to move up to the valley in the winter and teach full time.

The story of my mother, being one of the early skiers of Sugarloaf became deeply entwined in family lore. My brother and I heard it often and skied the old Winter’s Way with pride. I told it to my own children over the years and they know it well, too. The teaching of skiing also spans generations as I taught and coached alpine ski racing at Saddleback, Sugarloaf, and Titcomb. My son, Jence, taught in the Bubblecuffer’s Program while at UMF, and also coached ski racing at Titcomb. My daughter, Emma, teaches at King Pine, in New Hampshire. Their grandmother took great pride in the way the thread of the enjoyment of the sport and the teaching/coaching of it wove through the generations. A few years ago, we were actually able to take some runs on what is now known as Natalie’s Birches with a fourth generation. My brother’s son Carter and his daughter Alice took to the mountain for some very special family time. Gran/Mom/Natalie was thrilled by those moments.

“When they talk about skiing being a lifelong sport, Natalie was the example. She was skiing at Titcomb, in Farmington, before Sugarloaf was open,” said Megan Roberts who has spent years in the ski industry and as a ski historian.  “So, she was already more advanced than shoes just learning at Sugarloaf when it did open. In her last years, walking, especially with ski boots on, was difficult for her. But as soon as she was on her skis, her grace and flowing freedom returned. Her love for skiing and sharing the joys and benefits of it was her lifelong passion.”

Natalie was known on a first name basis by many of her peers. “I saw her on a regular basis whenever I was at Sugarloaf,” said Greg Sweetser, executive director of Ski Maine Association. “We never worked together, but she was surely an icon in the ski instructor world.

“One thing that really stood out about Natalie was her incredible work ethic, and love of teaching people how to ski and how to improve their skiing. She had a knack of communicating with skiers and bringing out their confidence to perform to their ability, and then take a step forward in building new skills.”

Sweetser continued, “Natalie was there every day, no matter what the weather. She loved the mountain and she loved all her friends throughout the Sugarloaf community. She set a great example for untold younger instructors at the mountain.”

Natalie’s affiliation spent here career teaching skiing which she was passionate about. She was a Level III certified instructor with the Professional Ski Instructors of America, was recognized by Ski Magazine as one of the top 100 ski instructors in America.

She was inducted into the Maine Ski Hall of Fame in October 2012. A few years ago, the Birches trail, at Sugarloaf, was renamed “Natalie’s Birches.”

Her last year of teaching was the season of 2018-2019 at the age of 95. Natalie will be missed by all who knew her. She was also a hiker and at the age of 90 took her first snowmobile trek.

“Nat was an amazing woman to put it mildly,” said Tom Butler, director of Ski Services.“I have known Natalie since the day I was hired as a ski instructor at Sugarloaf in 1992. At that stage she was nearly 25 years into her ski teaching career which began in 1969 and continued through 2019. A 50-year career in the same job, for the same employer is an impressive accomplishment. The fact that she started her tenure at Sugarloaf when she was 46 years old is mind boggling. One can think of the numbers of students she’s taught but I like to think about the generations of students that have had the pleasure of learning from her. Grandparents, parents and children of the same families all learned from Natalie. Her expertise and knowledge were literally passed down from one generation to another. Her influence on these skiers is hard to calculate but her legacy is easily felt all around us.

Natalie was a beautiful skier, smooth and elegant and I would sneak in behind her every now and again to follow, and watch her as she skied down a slope to try and mimic the grace and flow that she exhibited. What sometimes gets overlooked though is how rugged she was. Natalie was physically and mentally tough and would not let weather or conditions dampen her enthusiasm for the sport or her guests. I remember when she was inducted into the Maine Ski Hall of Fame, a guest at the banquet commented to her that she reminded him of his mother in that, even at an advanced age his mother wouldn’t think twice about climbing a ladder to paint the house. Natalie looked at him with a quizzical look and without any pretense said, “Well, the house wasn’t going to just go paint itself.”

That’s how she lived her life, completely on her terms with no excuses and pure grace and determination. We’re going to miss her something fierce,” he said.