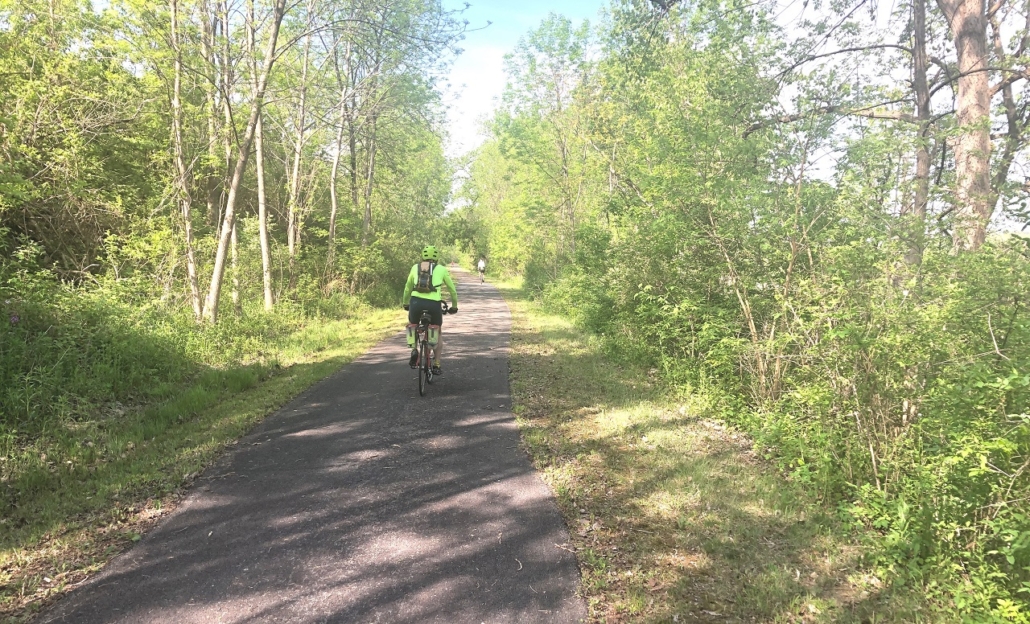 Riding along the Erie Canal Trail.

This is the first of a three-part series on Steve Ball’s trek across American on a bicycle. Steve is from Windsor.

This is a story of a trip across the United States, from the Atlantic to the Pacific. The idea of making the trip was crazy. Ride across the country on a bicycle. Are you nuts? I am one of those riders who peddles along our local roads, streets, and byways: Lake View Drive, Rte. 3, Rte. 32, Rte. 17… and the list goes on. It’s how I find my inner peace. 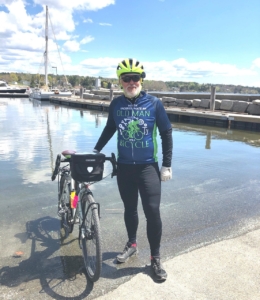 Steve starting out in Belfast.

Riding can be a lonely endeavor. Cycling without anyone or any device talking gives me time to think, to ponder on all sorts of happenings without interruption. The focus quickly becomes where I am and what’s around me. I also get to see the world at 12 mph, a pace that lets me take it in, to see the detail missing when traveling at 65 or even 25 mph. This for me is near bliss.

It was on one of my local rides around China Lake that the idea of riding across the country first popped into my mind. The idea of taking on the nearly 4,000 mile bike journey seemed almost too grand not to give it further thought.

After many miles and rides I convinced myself that I needed to take on this challenge. It would be a trip to remember and I’m certainly not getting any younger. It was after this clear realization that my rides took on a greater purpose: get myself ready for the ride of a lifetime.

Our plan was for me to ride my bike and Allane would travel along as my trusty and able assistant and partner. In the cycling world she would be my “SAG”; Support and Gear. Whew, was I glad for that. She drove our truck with clothes, camping gear and everything else we would need to make the journey. She was the best partner I could have asked for, always there and ever positive.

The ride started on May 10, 2021, in Belfast. I was joined for the beginning stages by three good friends: John Williams, Judd Thompson and local rider, John Benziger. All are either avid bike riders or outdoorsmen with a similar insatiable appetite for getting outside of the normal flow of life and interacting with nature. On Day One we rode from Belfast to our homes in Central Maine, 35.7 miles. We were off and biking.

It was a good start. No one got hurt, no flats, nice weather and the hills manageable.

We rode through Auburn, Bridgeton, and Fryeburg. Maine seemed even more beautiful than ever. I knew the White Mountains of New Hampshire and the Green Mountains of Vermont would present the perfect beginning for this transcontinental challenge. Our first big trial was coming up – climbing the Kancamagus Highway. On Day 4 we woke up in Center Conway, New Hampshire, and headed for the mountain. The day was clear and traffic was light, conditions seemed perfect. As it turned out, the thought of climbing the ‘Kank’ was more daunting than the actual ride. All members of the team made it! In retrospect, this would turn out to be a relatively small mountain at just under 3,000 feet, but conquering the ‘Kank’ on this day felt like quite a feat!

We rode on through the spectacular mountains of western New Hampshire into Norwich, Vermont. Norwich was a timely and wonderful stop after riding over a string of mountain passes that tested us. The views were spectacular. After Norwich we peddled through the quaint, picturesque towns of Quichee and Woodstock, Vermont. If you want to visit some of the best of New England culture and tradition, these towns are worth the trip. John and Judd had to turn back in Woodstock. Jobs awaited them.

John Benziger and I peddled on. Once we scaled the mountains that frame Killington and Pico Ski Resorts we were headed into New York.

We rode through Whitehall, along scenic Rte. 4. We were at Day 8 and felt good. I had my first flat tire coming into New York. This certainly wasn’t a big problem, but I hoped it wasn’t an omen of things to come. After patching my tube we continued on to Glens Falls, a small town on the Hudson River.

Until we got to Rochester our riding in New York was largely a journey along the Erie Canal Trail, a multi-use trail that runs from Albany to Buffalo. We entered to the Erie Canal Trail, in Amsterdam, New York, and would end up hugging the active waterway until we got to Brockport, New York. We met Lock Operators opening and closing the locks allowing barges, personal fishing boats, and kayaks (!) to travel up and down the Erie Canal. We saw local groups having rowing regattas and plenty of tourists and locals enjoying the pleasant, peaceful pace of life along this historic waterway. To be honest, I had no idea the Erie Canal was as active as it is today. 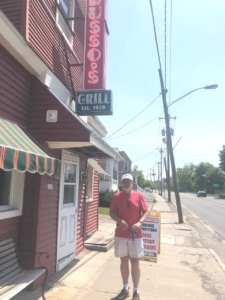 Amsterdam, New York, sitting on the Mohawk River, is an old mill town with a lot of personality. Families are out on their porches, children are playing, kicking balls, and riding bikes in the old style neighborhoods. Tucked away in a small working class Italian neighborhood was Russo’s Grill. The charm was palpable. We were greeted by Marie, our waitress who didn’t hold back in recommending specialties and telling us a bit about this post-WWII restaurant/pub. The food was out of this world. Marie was one of 16 children, all by the same mother and father! Wow! She was charming in a warm Italian way and packaged up our leftovers with the care of a mother wrapping her children’s lunch for school.

John Benziger had to return home to South China once we hit the campground in Lyons, New York, near Rochester. Allane and I were on our own.

We traveled from Lyons to Brockport and headed south toward Lake Erie. We were now on Day 16, having already spent just over a week in New York. I had no idea New York so long!

From Brockport I made it to Chaffee, arriving just seconds before the skies opened up with a fierce thunderstorm. We then headed west toward Pennsylvania. This took me along the southern border of Lake Erie through vineyards and orchards, miles and miles of grapes and apples. Once I could see Lake Erie I felt like I might possibly find my way out of New York. I rode 465 miles from the eastern end of New York to the western end, making up nearly 10 percent of the trip. Whew! I have a whole new respect for the Empire State.

From New York I rode through Erie, Pennsylvania to Conneaut, Ohio. We intended to spend the night in Conneaut and then ride on to Cleveland, but Mother Nature had other ideas. I pulled into the small resort town of Conneaut with mostly sunny skies. Allane and I rested up, I got my bike ready for the next day’s ride and we ate at a nice Italian restaurant. The weather started to turn and, just like in Maine, it can go bad quickly. The winds kicked up, rain came in and there was a serious storm churning the lake’s waters. By the time we awoke the winds were at 50 mph and the temperature was 47 degrees. It was pretty clear I wasn’t going to be able to ride my bike. The nice proprietor where we were staying suggested we stay another day and we readily agreed.

The day following the storm was beautiful. I enjoyed my ride to Cleveland. As it happened I rode into the Rock & Roll Hall of Fame parking area and decided this was a good place to stop. Allane and I were looking forward to arriving in Cleveland since John Williams and his wife Nancy Beardsley were meeting us there to ride with us for a week. This was our 20th day on the road and I’d cycled over 1,000 miles.