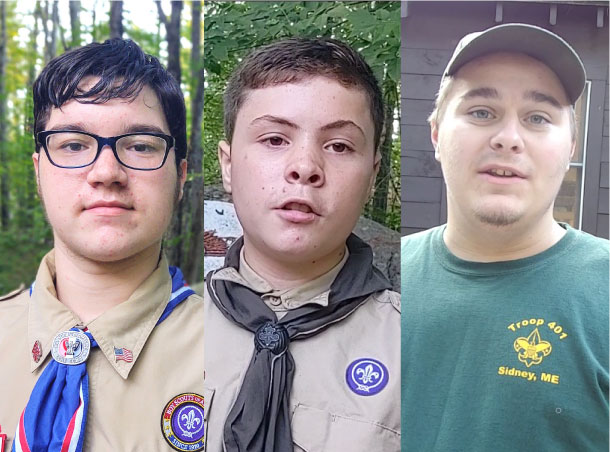 Scouts from across the area are busy working on a new and difficult project. If they are successful, there is no merit badge for them to receive but something even better. They hope to save their beloved Scout Camp – Camp Bomazeen.

Dalton Curtis, of Skowhegan, Dawson White, of Sidney, and Zachary LeHay, of Oakland, are some of the Scouts who have begun circulating a petition to save Camp Bomazeen. The Scouts visited leaders during the recent Kennebec Valley District Scouter Recognition Dinner/ Program Kick Off at Camp Bomazeen. They asked them to sign the petition that night and to ask if any Scouts in their Pack and Troop want to help collect more signatures in their area. The petitions will be presented to the Pine Tree Council Executive Board at an upcoming meeting. In July, the council executive board voted to sell the camp this year – its 75th anniversary since opening.

Life Scout Connor Keimel, of Troop #401, Sidney, is one of the Scouts taking part in the petition drive and said, “Bomazeen has been a camp that I have gone to for so many years. I have made so many memories here. It would be such a shame if other Scouts coming forward didn’t have the opportunity to go there.” Eagle Scout Dalton Curtis, of Troop #485, in Skowhegan, said he learned to swim at Bomazeen and he loves all of the aquatics activities. Zachary LeHay, a Second Class Scout, from Oakland, said that he enjoys the camp in all the seasons. He has taken part in winter camping trips there and week-long summer camp experiences. Star Scout Dawson White, of Troop #401, in Sidney, loves the shooting sports program at Camp Bomazeen. “I have never been to another Scout camp. I just love it and would hate to lose it.”

Dalton’s mother, Tammy James, said that he has been working hard on collecting signatures but it has been hard with Covid-19. “Some people aren’t really happy about us going to their doors even with masks on,” she said. “But he is continuing to work on his sheet and will be bringing it to the troop leaders’ meeting. He really has gotten so much from his time at Camp Bomazeen. He would live there if he could.”

Former Camp Bomazeen Director Bruce Rueger, of Waterville, praised the Scouts for their effort. “I was heartened to see the Scouts doing this,” Rueger said. “They clearly have formed a strong bond with the camp. I think that is what happens. You spend so much of your time camping at Bomazeen, taking part in camporees there, working on merit badges there, learning about nature, exploring the world around you and discovering things about yourself as you do – it becomes a part of who you are and you want to preserve it for others. Camp Bomazeen has given to them and generations that have come before them and now they want to give back when Bomazeen needs their help the most. Bomazeen has made a remarkable difference in so many people’s lives since it was given to Scouting by Dr. Averill in 1944. Some of our Scouts went on to serve in the military, help the needy and run large corporations. Peter Vigue, CEO of Cianbro, in Pittsfield, was a Bomazeen Scout in 1959 as was his son and grandson as well. ”

Chris Bernier, of Winslow, runs the Bushcraft Program at Bomazeen which is a living history program designed to teach Scouts skills such as Native lore, blacksmithing, outdoor cooking, muzzle-loading, basket-making, metal working, woodworking, candle making, to hide tanning. The program transports Scouts from today back to the pioneer days of the 1840s. Before joining the staff, Bernier was a Scout at Camp Bomazeen. “I think that the Scouts wish to do this it is a great way for them to practice citizenship,” Bernier said. “They see something wrong and they are peacefully trying to make it better. They wish to see an active change and to do so in this manner is practicing what they learned in their citizenship badges. In this case Citizenship in the Community – the community of Scouting for them and future Scouts.”

Scouts from several communities including Jackman, Skowhegan, Sidney, Oakland, and Augusta are working the petitions that they began circulating on August 12. They hope to convince the Scouting Executive Board to reconsider their vote to sell the camp and, if not, that they hope to convince whatever entity buys the property to allow the Scouts to continue to use it as they have for the past 75 years.

For those who would like to lend their name to the petition but would not like a Scout to visit due to Covid-19 concerns, email FriendsofBomazeen@gmail.com or send a message to the Facebook page Friends of Bomazeen. Be sure to include your name, town and what Bomazeen means to you. 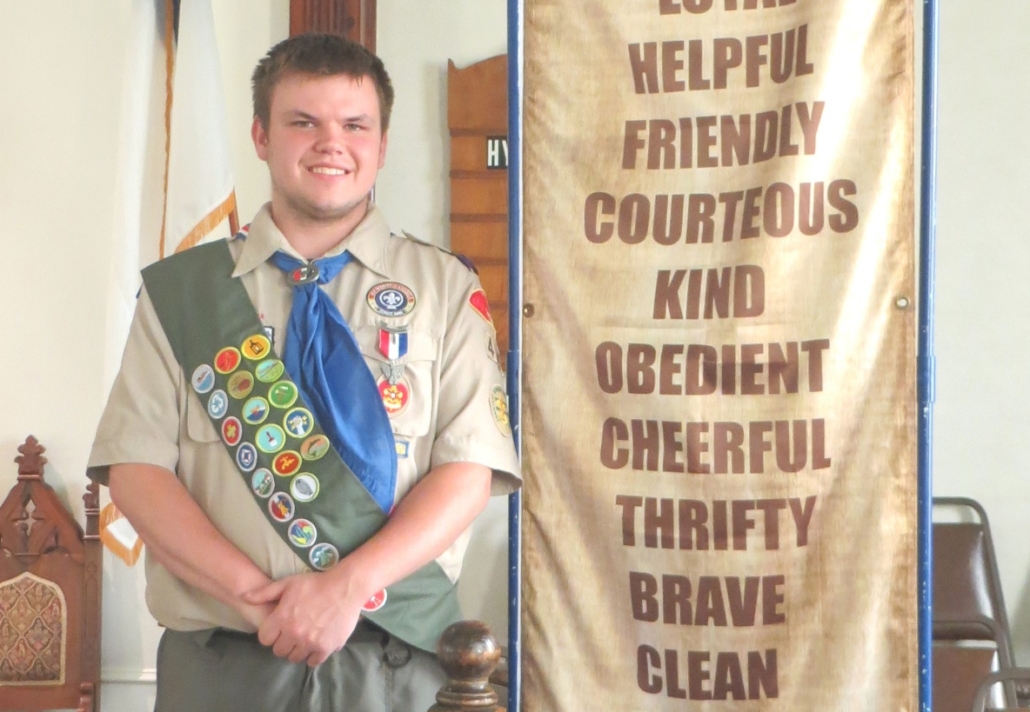 On Saturday, June 29, Troop #479 honored an Eagle Scout at a Court of Honor held for China resident Misha Littlefield, at the China Baptist Church. Family, friends and Scouts attended the ceremony marking the advancement of this young man to the highest rank in Boy Scouts.

Misha joins a group of Eagle Scouts who have completed community service projects with the help of fellow Scouts and other volunteers. Each Eagle candidate must plan and supervise an Eagle service project to demonstrate his capacity and willingness to exert his leadership ability in activities that are constructive and worthwhile in his community.

Misha’s project benefited the community by building shelves at the China Food Pantry for the monthly delivery of USDA Federal goods. They did not have room to store the monthly delivery in a convenient location to stock food boxes. This Eagle Service project led by Misha Littlefield was greatly needed, according to Ann Austin, at the China Food Pantry.

Misha recognized all those who helped him to reach the Eagle Rank. Misha is the son of Rodney and Julie, of China, and is working at Lowe’s, in Augusta, and running his own business while working toward becoming an EMT. 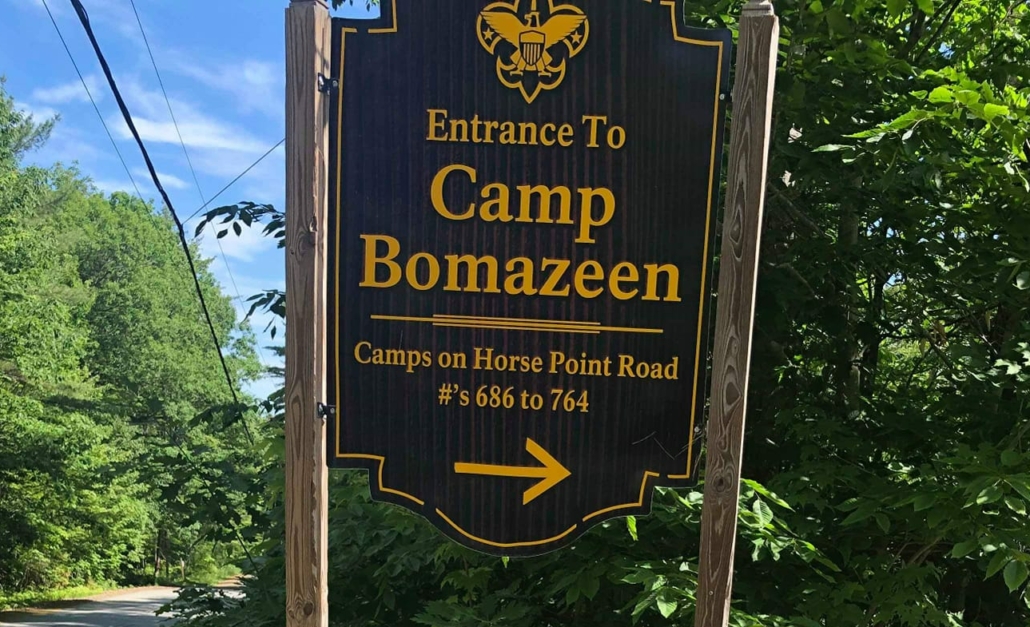 On the weekend of May 17-19, 100 Scouts and leaders from across Kennebec Valley District, BSA, attended the Spring Camporee at Camp Bomazeen on the shore of Great Pond, in Belgrade. The theme of the camporee was Service to Camp. Friday evening a planning meeting was held where project assignments were handed out to each youth leader for Saturday morning. On Saturday morning, an additional 20 youth and leaders arrived. Together with the weekend campers, they put in over 400 hours of service preparing Camp Bomazeen for the summer season by cleaning up the campsites and clearing brush. Some leaders transported new tent platforms out to the campsites, while others cleared away trees felled by winter storms. Another group of adult volunteers started construction on a new staff cabin.

In the afternoon, several activities were held for the scouts as a thank you for their service. Some of the more popular events included: the Gaga Pit, a version of dodge ball; Catch the Snappah, where scouts lashed together a fishing pole to catch mouse traps, each one marked with what they caught such as an old boot, shark, or large fish; and Hula Hoop Circle, where the scouts joined hands in a circle and had to move one or more hula hoops around the circle without letting go of the hands of the others.

While the service and activities took place, about 12 new volunteer leaders completed Introduction to Outdoor Leader Skills training to help them safely take youth out on future camping trips. At the Saturday evening campfire, there were songs and skits. Near the end of the program, 31 youth and leaders were recognized for being elected into the Order of the Arrow, the BSA’s national honor society.

The following units participated in the camporee for the weekend: Troops 142, 200, 207, 446, 454, 586, & 622. Crew 254. Packs 603 and 622. Troop #199 attended during the day on Saturday. Kennebec Valley District provides support to young boys and girls ages 6 to 20 in various Boy Scout programs in five Maine counties: Kennebec, Somerset, Franklin, Lincoln, & Knox. If you would like to learn more about our organization, please search for Kennebec Valley District, BSA on Facebook or go to the Pine Tree Council website: http://www.pinetreebsa.org/