While watching a documentary about turtles on British Broadcasting Company/America (BBCAm) over the weekend, they had several episodes about turtles on the show Blue Planet. It got me to thinking about turtles in our area, and the plight they encounter. I have written on turtles before, but I felt it was time to do it again.

Recently, I received a story from Unity College on a program the students conducted over the summer, and I thought I would share it with you.

Here is the article: 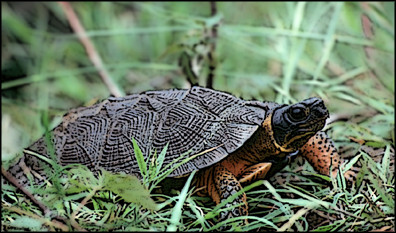 As the antenna slowly swept a semicircle into the crisp fall air above his head, senior Greg Leclair listened closely to the steady beep of the receiver at his chest for any change in intensity. Up to his hips in leaf-strewn stream water, sporting camouflage waders and a Unity College baseball cap, if it weren’t for the radio-telemetry gear Greg could have easily been mistaken for a fisherman on a morning expedition. But his quarry was of a much craftier kind.

Suddenly, he paused, eyes squinting against the increasing blaze of a rising sun, and gestured upstream. “We passed him. He’s that way,” he called out, catching the attention of two other student volunteers combing nearby banks for any sign of their clever target. Somehow they’d missed him — but that was no surprise. He could be anywhere: cozy under three feet of water or tucked happily between the roots of a tree. He might even be sunning himself beneath a thin layer of sand on a nearby beach, virtually invisible to all but the carefullest passerby.

But 20 minutes later, the jig was up. Going on a hunch, Greg wandered up an embankment and into the woods nearby, antenna in hand, to search. The transmitter’s telling beeps assured that Gotham, one of ten radio-tagged turtles currently wandering the woods and waters surrounding Unity, Maine, promptly got pulled out of the shady protection of an overgrown raspberry bush. Since spring 2015, Greg and other Unity College students have followed the telling beep of their telemetry gear and waded through deep waters to locate turtles.

In partnership with Maine Inland Fisheries and Wildlife, Associate Professor Matt Chatfield initiated a mark-recapture study and a radio-telemetry and habitat mapping project on a nearby Wood Turtle population. At least once a week in fall and spring, students pull on their waders and search for turtles, both tagged and untagged, to collect data on. “This project and this college are a match made in heaven. We’re all about sustainability science, conservation and protection of the environment here, and this project really speaks to that,” Dr. Chatfield said. “This is a real opportunity to collect information that can be used range-wide to help conserve this turtle in its wild habitat, and also offers integrative experience that is essential in training the next generation of wildlife biologists and environmental problem-solvers. So far it’s been very rewarding — it’s always fulfilling as a professor to watch your students grow.”

As a group, turtles are the most imperiled vertebrates on earth. More than 80 percent of species are already extinct or threatened with extinction. The Wood Turtle is especially at risk, and is experiencing widespread decline throughout much of its range. The species is currently listed as a Species of Special Concern in Maine, and as a Priority 1 Species of Greatest Conservation Need in Maine’s Wildlife Action Plan. But data on Wood Turtles remains sparse, making Unity College’s study a much-needed attempt to fill in some of the gaps. The project will hopefully help scientists understand how Wood Turtle habitat use and movement patterns may be influenced by things like agriculture, road construction, and development. “This project, through close collaboration between students, faculty and MDIFW biologists, helps fulfill the mission of the college, while simultaneously empowering students through invaluable experiences on a local, yet globally-relevant conservation project,” Unity College President Dr. Melik Peter Khoury said. “Participation in the project through internships, work study, and volunteering through the campus herpetology club, helps students transition smoothly into graduate programs and further their career goals as biologists or conservation practitioners.” Each turtle found is tracked with a number, using the same system as the state of Maine because ultimately all of the gathered data goes on to Maine Inland Fisheries and Wildlife.

Besides their numbers, most turtles are also given informal names. “Shredder” came about after one turtle kicked so much during his transmitter glueing that he shredded the latex gloves of his handler. Another turtle unexpectedly turned up a solid half mile from his usual haunts one day and gained the name “Roman” for his efforts. “Gotham” got his name for his piercing yellow eyes and dark shell, bringing to mind an image of “the dark knight” for some students.

Dr. Chatfield has watched many of his undergraduates become increasingly interested in the project over three years of study, seeing its influence on their career paths, skillsets and sense of responsibility. He said he leans on Greg in particular in a way generally reserved in academia for graduate students.

Was it just me or was this year’s Daytona 500, except for the final five laps, the most boring of all. I have never watched a Daytona 500 that had as many commercials as this one. It was like commercials every five laps, that took up about six or seven laps of the race. Here was how I tracked it. With 32 laps left, they went to commercial and returned with 25 laps left. Commercials again at lap 21, returned at 17, broke again at 14 laps, returning with 11 laps to go. And during the only green flag pit stops – very exciting to me – they were in commercials. I think I saw more commercials than the actual race.

When was the last time the U.S four-man bobsled team won a gold medal?

Roland’s Trivia Question for the Week of February 22, 2018 FOR YOUR HEALTH – Healthy Living And Macular Degeneration: Tips To Protect...
Scroll to top