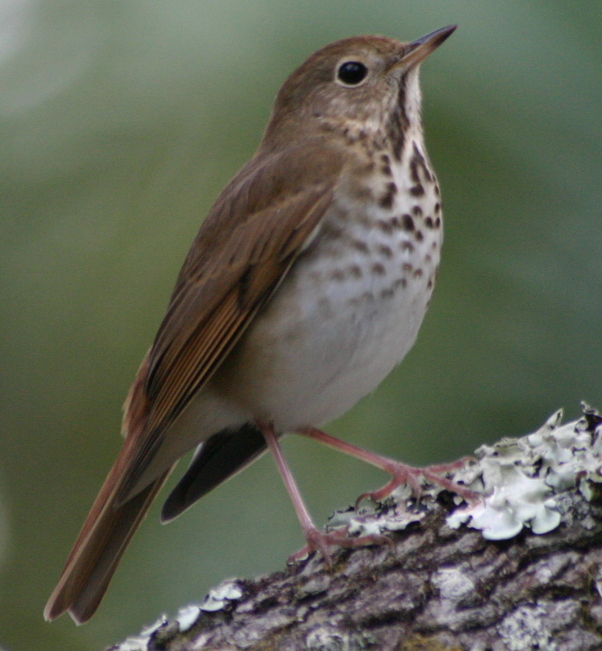 We haven’t visited the world of ornithology in quite some time, so it was only fitting this past weekend when someone at the weekly campfire asked a question about a bird that sings at night. After some research, it was determined the song heard was that of the hermit thrush.

According to The Cornell Lab of Ornithology, the hermit thrush’s song has been described as “the finest sound in nature.” It is flute-like, consisting of a beginning note, then several descending musical phrases in a minor key, repeated at different pitches. It often sings from a high open location. The famous author Walt Whitman referred to the hermit thrush as a “symbol of the American voice, poetic and otherwise,” in his elegy for Abraham Lincoln.

It is an unassuming bird with a lovely, melancholy song and lurks in the understories of far northern forests in summer. They have a rich brown upper body and smudged spots on the breast, with a reddish tail that sets if apart from similar species in its genus.

You can look for the hermit thrush in forest openings or along trails. This species spends winter and summer in different parts of the country. In spring and summer, you’ll likely hear their mournful, flute-like song long before you see them.

Hermit thrushes, Catharus guttatus, visit backyards, but generally do not go to feeders. However, during migration, they often forage on the ground or eat berries in yards with trees or shrubs. Males usually gather food for the nest, while females feed the nestlings. They usually make their nests in and around trees and shrubs, but they can also get more creative. Nests have been found on a cemetery grave, on a golf course, and in a mine shaft.

Young are ready to fly at about 12 days old. They usually have one to two broods a year. They eat mostly berries, beetles, ants, caterpillars, true bugs, grasshoppers, crickets and many other insects. They will also eat spiders, earthworms, and sometimes salamanders.

The male will defend the nestling territory by singing, especially in the morning and evening. Their nest site varies with the region, mostly found on the ground in the east and north, in a natural hollow on the side of a hummock and well hidden by overhanging branches or surrounding low vegetation.

The hermit thrush is hardier than other brown-backed thrushes. If it is startled from the ground in the forest interior, it often perches low and stares at the observer, flicking its wings nervously and slowly raising and lowering its tail.

The hermit thrush migrate in early spring and late in the fall, and probably migrates mostly at night. They are not year round residents of the state of Maine, but merely come here during the breeding season. They can only be found year round in Arizona, New Mexico, and parts of Pennsylvania, West Virginia and Virginia.

While most hermit thrushes migrate to wintering grounds in the southern United States and south to Central America, some remain in northern coastal U.S. states and into southern Ontario. They usually breed in forests, but will sometimes winter in parks and wooded suburban neighborhoods.

The oldest recorded Hermit Thrush was at least 10 years, 10 months old when it was recaptured and re-released during banding operations in Maryland in 2009. It had been banded in the same state in 1999. They can be found in every contiguous state in the United States.

Conservation-wise, the numbers of the hermit thrush seem to be holding up well.

In culture, the former Canadian indie-rock band Thrush Hermit took its name from a reversal of the bird’s name. It is also shared by the American bands Hermit Thrushes and Hermit Thrush. Also, A Hermit Thrush is the name of a poem by the American poet Amy Clampitt. A hermit thrush also appears in the fifth section of What the Thunder Said, of the T. S. Eliot poem The Waste Land.

The irony of the whole episode is that in the 31 years my wife and I have had this camp, we had never heard it before.