Vassalboro School Board members and AOS (Alternative Organizational Structure) 92 and Vassalboro Community School (VCS) administrators spent most of the Aug. 24 board meeting catching each other up on summer activities and plans for the new school year.

While most students were on vacation, school personnel oversaw building repairs and improvements, welcomed new staff members and helped them get settled in and took part in numerous workshops, retreats and other group meetings.

Finance Director Paula Pooler said figures for the fiscal year that ended June 30 will not be final until the annual audit is finished in October, but the school unit “didn’t end the year in the red.”

Fall registration is also not complete, VCS Principal Dianna Gram said – she expects changes for the next two weeks.  AOS staff provided a 10-year enrollment survey which, despite errors and inconsistencies that school board members noted, showed a decline of more than 100 Vassalboro students since 2006.

School board members unanimously accepted four staff resignations and appointment of seven new staff members – an unusual number of staff changes, Gram said, and Haley said the same had been true in Waterville and Winslow schools.

The school board’s Sept. 20 meeting will be preceded by an informal gathering with new staff members, scheduled for 5:45 p.m. at the school.  The meeting is scheduled for 6 p.m.

Frank (Richards) and I went out in his boat to look at a floating island of weeds.  What I keyed out was elodea Canadensis.  Is it possible I was mistaken?  Unlikely, as I’ve looked at gobs of the stuff but still possible.  Given the level of angst about the “weed” issue in Webber I’m going to take another look at some different spots.  Many of the ponds in the mid-Maine basin are experiencing “better” water quality this year and there are multiple reasons for this.  Very low rainfall (drought) and higher than average atmospheric temps (and by default that includes water temps).  This can set up a dynamic in ponds that strongly stratifies the water.  The thermocline becomes very pronounced and through this effect limits the amount of phospherous available.  We’ve had very few storm events this summer. 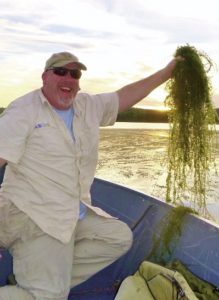 It takes a good blow to disrupt the thermocline and allow the phospherous trapped in the anoxic zone to mix with the water above it.  Make no mistake, this will happen at one point or another.  A good strong wind will drive the water to the southwest shore (assuming a Nor’easter here).  All that water will have to go someplace – down.  The further into the season we get the lower the pond surface temps will be thereby “weakening” the thermocline.  Once that lens is broken there is a lot of phospherous available to mix in the upper water column.  Once the phospherous gets there…..boom!  Phytoplankton bloom!.  The pond goes green.  Meanwhile this thermocline/water clarity issue will in turn favor greater light penetration.  This greater light penetration will induce more plant growth.  In some cases explosive growth.  Especially in the shallower reaches of the pond, i.e. the north end.  The patch that Frank took me out to was about 2-3 acres of dense growth.  So, I think another visit to the pond is in order.

There appears to be misconceptions, or maybe misinformation, circulating that the proliferating vegetation in Webber Pond is Eurasian milfoil.

Nate Gray, regional biologist with the Maine Department of Marine Resources was summoned by Webber Pond Association President Frank Richards to investigate. Gray responded by making a trip to the pond. In a boat, they entered the “field” of weeds at the north end of the lake. Upon close inspection, Gray concluded, as have others, that the vegetation is Elodea canadensis, or American pondweed or waterweed. Gray elaborated that the plants are a major nuisance, but they are harmless. 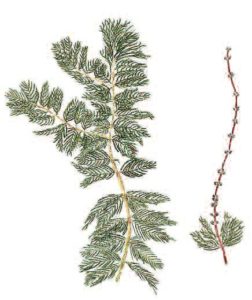 American Waterweed or Pondweed is a perennial aquatic plant, and is native to most of North America.

The plant grows rapidly in favorable conditions and can choke shallow ponds and canals. It requires summer water temperatures of 68° – 77° and moderate to bright light.

Young plants initially start with a seedling stem with roots growing in mud at the bottom of the lake. More roots are produced at intervals along the stem, which may hang free in the water or anchor into the bottom.  It grows indefinitely at the stem tips, and single specimens may reach lengths of 9-1/2 feet or more.

It lives entirely under water, with the only exception being the small white or pale purple flowers which float to the surface but are still attached to the plant by delicate stems. 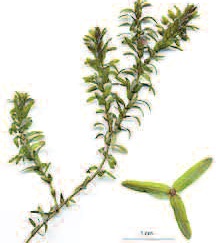 The plant will spawn seed capsules that will spread and ripen under water. They flower from May to October.

Elodea canadensis is native to most of North America and was used as an aquarium plant.

On the other hand, Eurasian milfoil, Myrio­phyllum spicatum, was likely first introduced to North America in the 1940s. By the mid-1970s, water milfoil had covered thousands of acres in British Columbia and Ontario. It is now found across most of North America where it is recognized as a noxious weed.

In lakes or ponds where native aquatic plants are not well established, the Eurasian plant can quickly spread. It can be deduced that native aquatic plants have established themselves firmly in Webber Pond. The weed can grow from broken off stems which increases the rate in which the plant can spread and grow. That is why it is important to check all boats, propellers and trailers before launching the vessel in various lakes. Plants can easily be transported from one lake to another.
Since 2000, hand-harvesting of milfoils has shown much success as a management technique. It is virtually impossible to completely irradicate the species once it has established itself. Therefore, continuous maintenance must be done in order to control its range.

But getting back to Webber Pond, biologists at the DMR have assured everyone that the weeds in Webber Pond are not the invasive milfoil, but the annoying pondweed.

Many anglers have expressed frustration when trying to navigate the lake, or attempt to put in a day of fishing. Some areas of the lake are virtually impassable by boat.

According to Richards, “this is more of an instance where Mother Nature has presented us with unmanageble conditions for this year.”