I had a differet subject in mind for my column this week, but circumstances over the weekend have changed my mind and peaked my interest. I also received an education.

Sitting with friends around a camp fire on Friday night, one of the neighbors said, that while kayaking that afternoon, she had seen a Golden eagle. I immediately chimed in that they were an endangered species, and were not known to exist in Maine (according to something I had read years ago).

The following day, while taking a boat ride around Webber Pond with some dear friends who are year-round residents on the pond, he asked if we had seen the Golden eagles. That did it.

Was it possible for Golden eagles to exist on Webber Pond. My friend went on to say he had witnessed them on the ice during the winter, actually devouring some fish that had been left on the ice by fishermen. 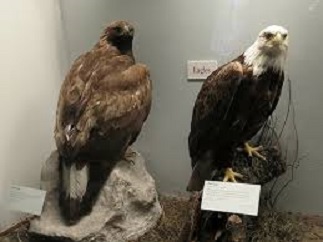 In this presentation at the Gidwitz Field Museum, Hall of Birds, in Chicago, Illinois, a golden eagle, left, and bald eagle are appropriately displayed.

To prove his point, he steered the party boat toward the west shore of Webber Pond, where, high in the top of a tree, was this large nest, occupied by some rather large birds. We were not able to discern what was occupying the nest from that distance. Bald eagles were circling in the area. I was still not sold.

Well, research taught me that Golden eagles, one of the largest and fastest of raptors in North America, do exist in Maine, although a rarity, mainly to the west and north of Moosehead Lake. So, now are they moving east in our state?

Golden eagles, Equila chrysaetos, can be found throughout the northern hemisphere. A large population exists in the western Rockies and north into Alaska. In the east, a small breeding population occurs in Maine, Labrador and Québec Province, although its range is greatly reduced  from its former extent down the Appalachians to North Carolina.

According to Cornell University Lab of Ornithology, Golden eagle populations appear to have been stable between 1966 and 2014.  Partners in Flight estimates their global breeding population to be 300,000, with 35 percent spending some part of the year in the U.S.

Golden eagles are listed as an endangered species in Maine. The decline in their numbers is directly attributed to environmental contaminants, especially DDT, that caused reproductive impairment during the post World War II era. Although these contaminants are now banned, they still persist in the birds’ bodies. Maine’s golden eagles depend heavily on wading birds as prey, which had high levels of contaminants. Five dead golden eagles have been found since 1985. Golden eagle eggs recovered from a nest in 1996 showed high levels of DDE, a variant of DDT.

Golden eagle populations have declined in the east throughout the 20th century, and were extirpated 20-40 years ago in the eastern states. Only 10 nesting territories have been documented with certainty, but at least 18 more locations are suspected. Six successful nesting attempts were recorded at three Maine eyries  [nests of birds of prey] from 1955-1967. Goldens disappeared from Oxford, Franklin and Somerset counties during the 1980s.  The last known nesting pair in Maine existed until 1999, then disappeared completely.  That pair was heavily contaminanted and had not produced young since 1986.

Today, Golden eagles can fall prey to collisions with automobiles, wind turbines, and other structures or from electrocution at power poles. Urbanization, agricultural development and changes in wildfire regimes have compromised nesting and hunting grounds.

There have been sporadic sightings of Golden eagles in recent years, and it is hoped that individual eagles from Canada may be moving into previously unoccupied eyries.  Counts at hawk watch sites seem to indicate the Eastern population is slowly recovering.

Adults may live 15 – 20 years in the wild, although they have been known to live 46 years in captivity. The oldest recorded Golden eagle in the wild was at least 31 years, 8 months old when it was found in Utah in 2012.

Once I was almost convinced the two friends thought they had seen golden eagles, I asked if they had misidentified immature bald eagles, which resemble each other. Both told me the birds they saw were much larger than bald eagles. My skepticism continues.  Golden eagle wingspans can extend up to six feet, with a 40-inch body, and can weigh 8 – 13 pounds. Bald eagles have a body length of up to 40 inches, with wingspans of 6 – 7.5 feet, and a body weight of between 6.5 – 14 pounds. Many sources say the bald eagle has sometimes been considered the largest true raptor in North America, outsizing the Golden eagle.

Golden eagles are uniformly brown throughout their lives. They get their name from amber or golden highlights on the head and neck. Golden eagles have shorter hawk-like bills, their lower legs are feathered to the ankles, and they soar with slightly uplifted wings, whereas a bald eagle flies with its wings stretched straight out so you can see their “fingers.” Golden eagles remain with the same mate for life. The female is larger than the male, otherwise, they look identical.

Sightseers and photographers should stay away from the nest during the nesting season, which is February through August. Like bald eagles, golden eagles are disturbed by human activities near the nests. Humans should avoid the nests during the nesting period.

Wintering areas for Maine golden eagles can stretch to the Maritime Provinces, depending on the availability of food. Their normal diet consists of ground squirrels, marmots, ptarmigan and seabirds.

My goal, at this point, is to photograph these “Golden eagles” before the summer ends, to correctly identify them as such. From a distance, of course.

Be careful what you wish for.

The other night, while watching a Red Sox game, the Sox were down 3-2 in the bottom of the ninth inning. With one out, Xander Bogaerts singled, bringing up David Ortiz. I said, “Come on, Ortiz, end it right here!” He did, grounding into a 4-6-3 double play to end the game. I meant for him to hit a two-run homer for the walk-off win. Sox lost. Be careful what you wish for.

Legal Notices, Week of August 4, 2016 Moving up in ranks
Scroll to top