John Lamontagne, Senior Director of Communications for SunEdison, said  there are three Massachusetts utilities that have contracted to receive the energy from the project, National Grid, Unitil and Eversource.

“The approximate cost of the project is about $420 million to develop and build the project,” he said.  “There are a number of financial organizations who have financed the project.”

SunEdison conducts extensive environmental studies when citing a wind project, according to Lamontagne.  “We conducted bird and bat studies to ensure the project is not in the migration path of any bird and bat species.  We continue monitoring of the project after it is operational to ensure the impacts to wildlife are minimal.  Certainly, there are some impacts to birds and bats, but we want to be sure they are kept at an absolute minimum.” 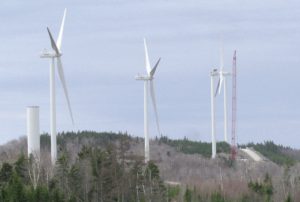 Turbines at the project are routinely maintained and inspected by an on-site crew.  Turbines go through quarterly reviews and annual inspections to ensure they’re kept in good working order as much as possible.  “In addition, the turbines are monitored 24 hours a day, 365 days a year at our Renewable Energy Operations Centers in California and Boston,” Lamontagne said.

The project has seen about 300 full time jobs created since the site construction started.  “Once the project is completed, Bingham and surrounding communities will receive millions in tax revenues,” he said.  “Although the energy goes to out-of-state utilities, the county should see a windfall in terms of revenues to pay for goods and services.”

Lamontagne said that when the Mars Hill project was built in 2007, folks saw their taxes drop 25 percent, once the project went on-line.  When the project was completed in Oakfield last year, folks in that community are seeing a massive benefit in their tax bills.  “Bottom line, communities see benefits in terms of jobs and economic benefits when the project is built.”

Many local residents have been keeping in touch with the wind tower project.  They have seen, towers, wind blades, of about 185 feet long and a lot of other pieces heavy equipment go by on the streets, headed to the job sites. 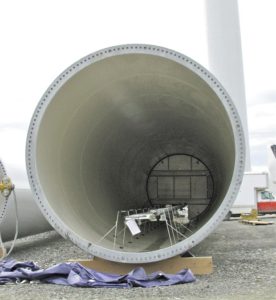 One of the towers on its side so electronics can be placed inside. The tower stands approximately 100 meters, (330 feet). Photos by Dan Cassidy

“We are totally impressed,” Steve Steward, first selectman of Bingham said.  “It is quite a big project.  When it’s all completed, the cost of the project will be over $400 million,” he said.

The tax savings in Bingham should be affected next year, according to Steward. There are 11 towers located in Bingham that will be about $4,000 per tower.  “The other towers are located in Mayfield, an unorganized territory and Kingsbury.”

The construction is going smoothly, and most residents are comfortable with that.  A note of interest is that the 56 wind towers being erected are not visible from Route 201.

Stanley Redmond, a local long time resident and a wood harvesting Land Agent has seen a lot of heavy equipment go right by his door on Route 201 over the last several months.  “How great it is to see science so advanced today and to watch all the people involved in installing these wind towers and see how professional they are doing their great work,” he said.

“The operation of installing these giants is something entirely different than what we thought it would be,” he said.  “Everyone involved are in great hopes these wind towers will prove to be very helpful for many reasons and will be accepted with open arms by all.  It will be interesting to see the decrease cost of purchasing power from these giant wind towers once they start turning the blades.  The engineer and all the associates should receive our thanks for such a remarkable job.”

Lamontagne compared the Oakfield Wind towers in Piscataquis County, as an example, “that town will receive $26 million in tax benefits and community benefit payments over the next 20 years. “As a result, folks in that community have seen their tax bills dramatically reduced.”

“Full-time Oakfield residents now receive tax breaks and an annual check for about $2,000 per year, a benefit that will be in place for 20 years,” he said.