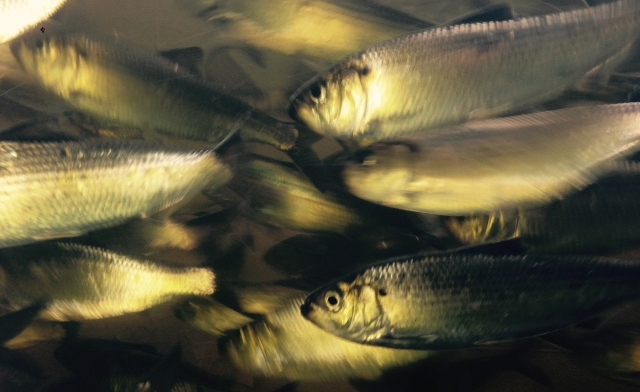 Recently, representatives of the Sheepscot Lake Association have referred to Webber Pond in articles about alewives submitted to The Town Line. I am writing to respond. I am the president of the Webber Pond Association.

I think it’s important for the public to know that in the last 20 years, sea run alewives have been restored to Webber, Sebasticook, Three Mile, and Togus ponds. People living on those lakes are generally happy with the result.

Sea run alewives are anadromous. The adults live in the ocean and, like salmon, spawn in fresh water. They need passage to get to their spawning grounds.

Again, they need passage to make the journey. It is possible (but rare) for them to become entrapped and die – if egress is obstructed or insufficient.

There is another species of alewife, the landlocked alewife, which is common in New York. However, sea run alewives do not become “landlocked” in the sense of ever adapting to living in a pond year round.

Sea run alewives are the way nature exchanges nutrients between the marine and inland ecosystems. They were substantially extirpated by the building of dams during the 1800s. Twenty years ago, the Maine Department of Marine Resources began to restore these useful fish.

Additional spawning areas mean that more adult alewives are in the ocean to support the marine fishery; by serving as forage for haddock, cod, stripers, and other ocean fish.

They are harvested during the spawning run and have already created a multi-million dollar lobster bait industry.

Alewives also benefit inland lakes. As the juveniles grow during the summer, they sequester phosphorus in their tissues. Because there are tons of little alewives, there is less phosphorus in the water to fuel algae blooms. They take it away in the fall when they leave.

Locally, Webber Pond, Sheepscot Lake, Three Mile, and Togus Pond all substantially cleared following the restoration of sea run alewives. However, the little fish are not magic. All those lakes still experience blooms from time to time.

Twenty years ago, alewife restoration was controversial. The Webber Pond Association assented to it somewhat reluctantly.

Because of successful restorations on a number of lakes, alewives are more positively received today – except in Palermo, where the Sheepscot Lake Association is engaged in a political campaign to block returning them to Sheepscot Lake.

I have been following a recent series of articles from representatives of SLA and 2 critical responses, by people I do not know. In my opinion, the objections to “slippery facts” are justified.

For example, [in the September 14, 2017], issue of The Town Line, an article by Roland Hallee is cited to promote the idea that alewives are adding to the nutrient load of Webber Pond. Roland is the editor of The Town Line and also a member of the Webber Pond Association.

This was not a science article. It was a summary of last year’s meeting of the Webber Pond Association, where a discussion occurred about a complex, mathematical, nutrient import/export model.

The officers and directors of the Webber Pond Association have questions about how many is too many. At a minimum, we believe we have way more than we need and support increasing the harvest.

Last year, our vice president made comments about the run increasing so much that we might be getting to the point where spawning adults were bringing in more nutrients than the juveniles were taking out. He spoke in good faith and used appropriate caveats.

It’s a fact that he raised the issue. It’s not a fact that a nutrient imbalance actually occurred. For that you would need measurements and an assessment by a qualified person.

Our vice president also attended the recent Sheepscot Lake Association meeting. He was the one who asked, “If you don’t mind my asking where did you hear something like that?’ when someone referred to mass die offs on Webber and problems with the fishery.

He advised that he’d lived on the pond for 30 years and there had been no mass die offs. Similarly fishing was good. Funny, nobody thanked him for setting the record straight.

It isn’t clear where the Sheepscot Lake Association is getting its information. They haven’t reached out to any of the nearby lake associations.

Similarly, it isn’t clear who they are using as their science advisor, or even if any specific person with appropriate credentials is working with them. I know that they have not consulted with the Department of Marine Resource, which with 20 years of restorations behind it now, is one of the leading agencies in the country with respect to alewife restoration.

I can confidently assert that it would be difficult to find an appropriately credentialed person who would back up many of the claims SLA is making in The Town Line. If there is one, maybe SLA can get them to step forward and write an article. I am all but certain that Roland will print it.

Community Commentary is a forum The Town Line makes available for citizens to express their opinions on subjects of interest to our readers. The Town Line welcomes, and encourages, differing opinions, counterpoints or opposing views. Keep the rebuttals positive, and informative, as submissions containing personal attacks will be rejected.