I always knew this day would come eventually. I always had it in the back of my mind that it wouldn’t be any time soon. It has taken me three weeks, but I have finally come to grips with it.

This is a story about a pet. 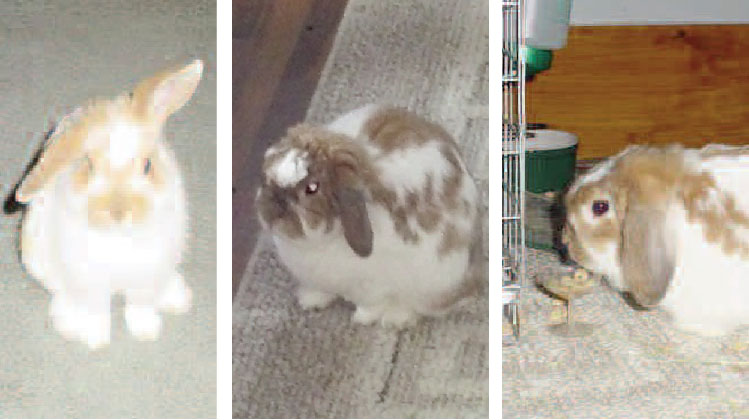 From left, Dudley, two weeks after we acquired him, on July 24, 2007; full grown adult in 2014; eating Cheerios from a miniature champagne glass. Photos by Roland D. Hallee

Dudley was born in a litter of 12 rabbits, as the runt. We have photos of him at a very young age, keeping to himself in the back of the cage. A place he would not stay for very long. Anyway, my wife has always loved the film Arthur, starring diminutive Dudley Moore, who stood only 5 feet 3 inches tall. My wife also had a love for the actor. So, she decided to name the rabbit Arthur. That’s when I stepped in and suggested Dudley, since that was the man’s name who played the character Arthur in the film. So Dudley it was!

Once we got him home, he would never again spend any time locked up in a cage. He had the run of the house. We purchased a collapsible dog kennel as his “getaway” space, and quickly litter box trained him.

In the early years he would run, jump, twist, and literally do acrobatic stunts, to our delight and entertainment. We had many a good belly laugh watching him go through his antics. He spent his time between camp in the summer, and home during the winter. Everyone who knew Dudley loved him. He was extremely social, and enjoyed being around my wife and I. He very often would give us love “kisses.” There were times when we thought he was almost human. The stories about him abounded with our friends and family. My favorite is when I would alert people of his presence behind the outside door. I would tell them, “Watch out for the rabbit, and don’t let him out no matter what he tells you.” Dudley became a legend in his own time.

My kids, I think, actually became jealous of him.

Once, when he was between 12 and 15 weeks old, we were given his sister to care for who had been a little dehydrated. My wife made sure the sister had plenty of water, and gave it an occasional spray water bath, all the time keeping it in a dark, cool area. But, in our opinion, it was Dudley who nursed her back to health. He spent his time huddled next to her and constantly licked her coat in an attempt to soothe her. Remarkable, was all we could think at the time. She was later able to return to her caretakers.

Of course, as the years passed, he began to slow down, like the rest of us. During his prime, he weighed 5.4 pounds, actually a little overweight for a lop.

It is the opinion of my wife and I that Holland Lops are the best rabbits in the world. Dudley was not a dwarf rabbit, but rather known as mini lops. He had a wonderful temperament, curious as all outdoors, and was easily trained. One of the remarkable characteristics of his, was that he did not fear the vacuum cleaner. You would think a small animal would not know what to make of a modern human contraption that makes a lot of noise, and run and hide. He would actually come right up to it (remember what I said about his curiosity). He was not fearful of other animals, particularly small dogs. Again, his curiosity would lead him to investigate what this other animal was that was invading his space. All-in-all, nothing really bothered Dudley. He was about as layed back as an animal could be.

And a story about Dudley would not be complete if we didn’t mention his love affair with Cheerios. The rabbit was addicted. He would do anything for them as a treat. At times, when I felt he had too many or he wasn’t being a “good boy,” I would ignore him. He would actually stretch as far as he could, and nip me in my inner thigh while I sat in my chair. It goes without saying he would get my attention. He would even get Cheerios from relatives and friends at Christmas.

I could go on about the experiences we had with this adorable pet, but space doesn’t allow it. All I can say is that I would have another one (but the pain of losing him was tremendous), and recommend them as a pet for adults. They don’t particularly like to be picked up and held, although in time, Dudley learned to accept it.

The average life expectancy of a mini lop is seven years. Dudley passed suddenly, in my arms, on March 31, 2017, 45 days shy of his 10th birthday. As far as we know, he was the last survivor of his litter.

Goodbye, little friend, may you rest in peace.