One of my neighbors at camp reported recently seeing a red fox trotting down the side of the Cross Hill Road, in Vassalboro, with a chicken in its jaws. That prompted many questions about the animal and its place among humans. There have been increased sightings of red foxes during the last few weeks and the diminutive canine is worth discussing.

You’ve probably read stories about the cunning fox trying to outwit his animal brothers and sisters. Foxes no doubt got their crafty reputation from the way they look, with their long, thin faces and yellow eyes that have narrow slits for pupils. But in real life, foxes are more concerned with finding food than with playing tricks on anyone. 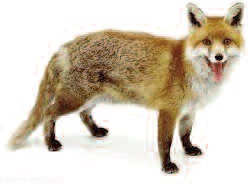 The red fox, Vulpes vulpes, is a lean, mean hunting machine that’s built for speed. About 3-1/2 feet in length, slinky and long-legged, they only weigh about 10 pounds full grown. But red foxes look a lot bigger because of their thick fur, which can range from deep brownish red to sandy blonde with black legs, feet, and backs of the ears and white underparts. Sometimes red foxes can even be all black or black with white tips, or have a dark brown “cross” across their backs.

Foxes are great hunters, and not only because they’re fast. Their large, upright ears allow them to locate a rustling sound within one degree of its true location, a trait that is not possible in humans. A fox can also hear a mouse squeal from 150 feet away.

Red foxes are solitary hunters that slowly approach their prey, creeping low to the ground and stretching their head high to spot the target. They pounce on the mouse, rabbit or other prey with their forefeet.

Mice, especially meadow voles, are a popular food for red foxes, but their favorite dish is rabbit. They aren’t picky eaters either, and will eat berries and insects in the spring and summer, along with squirrels, songbirds, ducks and pheasants. In the north, they will also eat snowshoe rabbits, and they’ll even clean up after humans by eating garbage. So, if foxes have been spotted in your area, it’s a good idea to secure garbage so as not to encourage it to continue to show up at your location.

Nighttime is when red foxes are most active. They do most of their hunting from two hours before sunset to about four hours after sunrise, and travel up to nine miles a night. When they aren’t hunting, foxes like to rest in forests, ravines or woodlots, curling their long bushy tails around themselves to keep warm. The tail is also used for balance or as a signal flag to communicate with other foxes.

Fox families each have their own clearly marked home ranges that they defend from intruders, but they don’t usually fight. Foxes are territorial animals. A group chase or a “threat display” – charging, growling, etc. – will generally do the trick. A fox family has a hunting range of about 150-400 acres, but in less diverse habitats, like farmland, one family might need up to 2-3 square miles.

Red fox don’t live in dens most of the year, but do set up nurseries in abandoned woodchuck burrows when it’s time to have pups. Foxes breed in mid-January and have five or six pups in mid-March. They will hunt with their parents when they’re three months old and are ready to strike out on their own at eight months.

Red foxes can be found along fence rows, gravel roads, paths or treelines, especially after a light snowfall. Their tracks are very similar to that of a small dog. On spring or summer evenings, search along hillsides with binoculars. If you see a mound of fresh dirt in front of a dark hole, it could be a den entrance.

The question most asked was whether they are a threat to humans.

Many humans think foxes are dangerous animals. The most concerns raised are do they pose a threat to pets, small children, and also look sick or rabid. Humans are intimidated by foxes. They will become aggressive if cornered, so never try to catch one with your bare hands. Generally, foxes are not especially dangerous to humans or pets. Attacks on humans are extremely rare. And that is only when the fox may be defending its den.

They do not regard humans or dogs and cats as prey. They will, however, take poultry and rabbits. If an attack is initiated towards dogs or cats, they usually end when the barking starts, and the cat extends its claws. Remember, foxes are not fighters. As a rule, once they have been discovered in an area, they might pack up and move.

Foxes, however, can be carriers of diseases, including rabies. They can spread other diseases through their feces, so it’s important to clean it up if you discover one. Although it will not affect humans, the diseases that foxes carry can affect your pets, especially dogs. If mange is suspected, see your veterinarian immediately. That can be treated.

Treat red foxes with respect, keep your distance, and they could be a source of entertainment for you for quite some time.