A little while ago, while watching the National Geographic’s channel on television, I saw an episode of a series called Great Migrations, and became very interested in the Monarch butterflies, who are among the most intriguing of the migrating species.

The monarch, Danaus plexippus, is probably the best known of all North American butterflies. Its wings feature an easily recognizable orange and black pattern, with a wingspan of 3-1/2 – 4 inches. 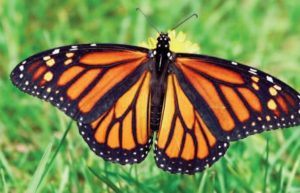 It takes four generations of Monarch butterflies to complete southern and northern migrations.

The monarch is most famous for its southward migration and northward return in summer in the Americas which spans the lifetime of three to four generations of the butterfly.

The upper side of the wings is tawny-orange, the veins and margins are black, and in the margins are two series of small white spots. The fore wings also have a few orange spots near the tip. The underside is similar but the tip of the fore wing and hind wing are yellow-brown instead of tawny-orange and the white spots are larger.

In North America, the monarch ranges from southern Canada to northern South America.

Monarchs are especially noted for their lengthy annual migration. In North America they make massive southward migrations starting in August until the first frost. A northward migration takes place in the spring. The monarch is the only butterfly that migrates both north and south as the birds do on a regular basis. But no single individual makes the entire round trip. Female monarchs deposit eggs for the next generation during these migrations.

By the end of October, the population east of the Rocky Mountains migrates to the sanctuaries of the Mariposa Monarca Biosphere Reserve within the Trans-Mexican Volcanic Belt pine-oak forests in the Mexican states of Michoacán and México. The western population overwinters in various sites in central coastal and southern California, United States, notably in Pacific Grove and Santa Cruz.

The length of these journeys exceeds the normal lifespan of most monarchs, which is less than two months for butterflies born in early summer. The last generation — also known as the super generation — of the summer enters into a non-reproductive phase and may live seven months or more. These butterflies fly to one of many overwintering sites. The generation that overwinters generally does not reproduce until it leaves the overwintering site sometime in February and March.

It is the second, third and fourth generations that return to their northern locations in the United States and Canada in the spring. How the species manages to return to the same overwintering spots over a gap of several generations is still a subject of research; the flight patterns appear to be inherited, based on a combination of the position of the sun in the sky and a time-compensated sun compass that depends upon a circadian (repeating in a 24-hour cycle) clock that is based in their antennae.

Monarch butterflies are one of the few insects capable of making trans-Atlantic crossings. They are becoming more common in Bermuda due to increased usage of milkweed as an ornamental plant in flower gardens.

Because they feed mainly on milkweed, monarch butterflies are poisonous or distasteful to birds and mammals because of the presence of cardiac glycosides that are contained in milkweed consumed by the larva. It is thought that the bright colors of larva and adults function as warning colors. During hibernation monarch butterflies sometimes suffer losses because hungry birds pick through them looking for the butterflies with the least amount of poison, but in the process killing those that they reject. Some birds, such as orioles and jays have learned to eat only the thoracic muscles and abdominal contents because they contain less poison. In Mexico, about 14 percent of the overwintering monarchs are eaten by birds and mice.

Many people like to attract monarchs by growing a butterfly garden with a specific milkweed species. Many schools also enjoy growing and attending to monarch butterflies, starting with the caterpillar form. When the butterflies reach adulthood they are released into the wild.

A problem in North America is the black swallow-wort plant. Monarchs lay their eggs on these plants since they produce stimuli similar to milkweed. Once the eggs hatch, the caterpillars are poisoned by the toxicity of this invasive plant.

The common name “Monarch” was first published in 1874 by Samuel H. Scudder because “it is one of the largest of our butterflies, and rules a vast domain.”

Monarchs are beautiful to watch during the summer, but the next time you see one, think of what that particular butterfly may have gone through to be with us.