Perkins attended Messalonskee High School in her freshman year. She also studied at Maine Central Institute, in Pittsfield, during her sophomore year, so she could train in ballet.  She returned to Messalonskee, to get in more classes and earned her high school diploma in three years.  “It worked out because I got into Vaganova Ballet Academy, in Russia, because I had all those extra classes.  I was able to graduate a year early, and train in Russia for a year in 2013-2014,” Perkins said. 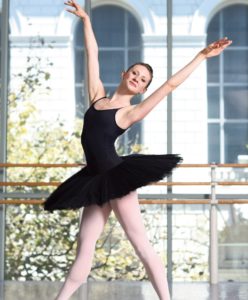 She contacted the director of the San Francisco Ballet and told them she was interested in attending their training program.  “I was accepted there and spent two years dancing in their summer program, where I just finished up,” she said.

Perkins, a tenacious young lady, has been dancing since she was four years old.  When she was seven, she realized that she really wanted to do ballet. She also studied ballet at Pacific Northwest Ballet’s Summer Course in Seattle, along with the San Francisco Ballet’s summer program.

She was offered a contract with Mariinsky Theater at the Primorsky Stage, but turned it down as she already signed a contract with American Ballet Theater Studio Company.  She is going to New York City in September,  “I am very excited,” she said.

Perkins will be performing for Bossov Ballet Theater, the school she trained at when she was very young.  She’ll be dancing to a ballet based on the story Don Quixoté.   She will also perform as a solo dancer at one point in the show, and there will be other dancers performing in Corts De Balle.  The show is to be held at at the Williamson Performing Arts Center, at Lawrence High School, in Fairfield, at 7 p.m., July 29, and Saturday, July 30, at 2 p.m..

“I really like performing and working hard in the field and constantly wanting to improve,” she said.  “With that, the more you improve, the more you gain, and the best part is being a ballet dancer on the stage and performing.  It’s like other athletes who are constantly trying to improve, and ‘we’, ballet dancers are doing the same thing, trying to improve.  It’s an accomplishment. Down the road, I’m hoping to continue dancing and staying healthy, and being able to do what I love.”

Gabrielle grew up in the Oakland, Sidney area.  Her parents, Mike and Kelly have watched her perform in San Francisco and have been instrumental in her career.  She also has an older brother Chris.  Mike Perkins is a retired police officer, runs a driving school and is transportation supervisor for RSU #18.

Gabrielle is well on her way to possibly becoming a prima ballerina some day soon.