AUGUSTA––Robert Theodore Greenlaw, 86, of Fairfield, passed away on Wednesday, August 9, 2017, at the Togus Springs Unit, at the Veterans Administration Medical Center, in Togus. Bob was born on August 29, 1931, in Belfast, the fourth of eight children to Byron and Edith (Philbrook) Greenlaw.

He was a Korean War veteran, having enlisted in the Air Force at 17 and serving his country from 1948-1952.

Bob received his GED in the service, attended the Boston School of Art for a short time, and then worked in farm equipment sales in the family business at J. E. McCormick & Sons, in Waterville, where he honed his knowledge of backroads and farms in Central Maine until his retirement.

Bob was involved with the Masonic Order and Indian Guides, and served on the school board at the time that S.A.D.#49 was created. He had a love of learning that he passed on to his children, and he supported his first wife Ruth in building West Street School in their backyard. He loved to travel, whether by cruise ship or RV, and visited England, Nicaragua, Russia and most of the U.S. until his health declined.

Bob was predeceased by his parents, Byron and Edith; his Gram Philbrook; his brother Byron Jr; his sisters Elmore and baby Joyce; and his first wife, Ruth Wood Greenlaw.

He is survived by his daughter Evelyn Greenlaw and husband Paul Gauvreau, and sons Dana and wife Cindy, Robert T., and Steve and wife Sherrie; by his four grandchildren, Sarah (and Jesse) Bolduc, Adam (and Ariel) Greenlaw, and Jessica and Johanna Gauvreau; as well as by his three great-grandsons, Zephyr and Keelan Bolduc and Robert A. Greenlaw; his sisters Ada Curtis, Shirley Johndro, and Helen Burns; his brother Donny Greenlaw; his former second wife, Edna Boivin Greenlaw, and her extended family.

Memorial donations may be made to the VA Center at Togus to support the services that they provide to those in need who served their country. 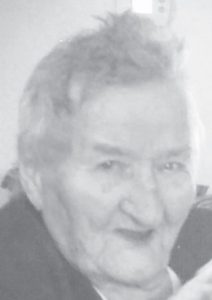 SULTAN, WASHINGTON –Grace Etta Bronn, 93, formerly of Palermo, passed away on We d n e s d a y, August 23, in Allensburg, Washington, one day after her 93rd birth-day. She was born on August 23, 1924, and was the widow of the late Raymond Bronn I.

When Grace lived in Palermo she was an active supporter of Erskine Academy when her chil-dren were active in sports. She was also active in the Palermo Christian Church where she was the organist for Sunday morning services. She loved watching tel-evision, knitting, crocheting, and camping trips. Everything she made, such as mittens, hats, scarves, slippers, wool socks, quilts, afghans and many baby outfits she gave to family or to anyone she thought might like them.

She was predeceased by daughter Erdine Fletcher, and sons Raymond Bronn II and Samuel Bronn.

Messages may be sent to Christie online at cmerrick4@yahoo.com.

Memorial donations may be made to the Palermo Christian Church, 322 Branch Mills Rd., Palermo, Maine 04354.

FAIRFIELD––Lloyd Beaulieu, 69, formerly of Chicopee, Massachusetts, passed away at home Wednesday, August 23, 2017, following a long battle with cancer. Lloyd was born on May 1, 1948, in Fort Kent, to Romeo Beaulieu and Albina (Bea) Myers.

He attended Chicopee Vocational School where he practiced his chosen trade in machine shop. After graduation he made aircraft parts for the U.S. Military and Space Program, working for companies including: IBM, Universal and Lucent Technologies. He went on to own his own machine shop, Lloyds Precision Inc. (LPI), in Westfield, Massachusetts, which he started with one surface grinder that he ran from his basement.

Lloyd sold his business and moved to Fairfield, in 2005 with Edith Enman. Together they built and ran Skyriders Disc Golf Course.

Lloyd enjoyed music and landscaping, continuously planting and tending to his gardens. He was in awe of the beauty and majesty of eagles. His greatest joy was his family which included his dogs. Upon entering Lloyd’s home you will see a plaque saying “Love One Another.” It could be said this was Lloyd’s creed. He treated all people with respect and kindness.

He was predeceased by his father, Romeo Beaulieu and his brother Gary Beaulieu.

He is survived by his wife, Edith Enman; his mother Albina (Bea) Myers; brothers Dell Beaulieu, Ivan Beaulieu and their families; and his extended step family.

WINSLOW––Dennis L. Castonguay, 80, of Winslow, passed away on Monday, September 4, 2017, at Lakewood Continuing Care Center, in Waterville. Dennis was born April 30, 1937, in Howland, the only child of Hillarie and Corinne (McLaughlin) Castonguay.

In 1953 the family moved to Winslow where Dennis met the former Geraldine Theriault, from Fort Kent; they celebrated 55 years of marriage and raised five children.

In his earlier years, Dennis’s biggest enjoyment was spending time and making memories with family and friends; from camping to ice fishing, and snowmobiling with his best friends, Bruce and Linda Waldron, as well as his loving family, he also had great pride in watching his children at the snowmobile races and truck pulls.

Dennis was predeceased by his wife, Geraldine Castonguay; and his parents, Hiliare and Corinne Castonguay.

Memorial donations may be made to Humane Society Waterville Area, 100 Webb Rd., Waterville ME 04901, in honor of his forever friend Baily.

ALBION––Jonathan Edward William Spaulding, 39, passed away unexpectedly following a long battle with health issues on Tuesday, September 5, 2017. He was born on July 23, 1978, in Waterville, the son of Laura Strohman (Rood), of Albion, and Edward Spaulding, of Winslow.

Jonathan enjoyed many years as a foreman and drywall installer. He loved fishing, hunting, racing, boating, motorcycling, four wheeling and snowmobiling, but most of all he loved spending time with his two children, Karleigh, 7, and Jase, 4. Family was most important to Jon. He was the type of man who was there for anyone in need, and wouldn’t hesitate to give you the shirt off his back. He will be sadly missed by many.

Jonathan is survived by his mother and stepfather Laura and Joe Strohman, of Albion; his father and stepmother Edward and Jody Spaulding, of Wachepregue, Virginia and Winslow; his children, Karleigh and Jase; their mother Denielle and her children, Brooke, Audri, Alexsander, Grant, Madyson; their grandchildren Harper and Jaxton; his grandmother Rosalie Rood, of Albion; his grandfather Edward Spaulding, of Waterville; his brother Eric Spaulding and companion Kelly Croom, of Waterville; his sister Virginia Spaulding, of Windham; his brother Chris Spaulding and wife Lorrie, of South Portland; and many aunts, uncles, nieces, nephews, and cousins.

WINSLOW––Donald J. Pomerleau, 64, of Winslow, died Wednesday, September 6, 2017, at the Alfond Center for Health at MaineGeneral Medical Center, Augusta, following a prolonged illness. He was born in Waterville on April 6, 1953, the son of Harold J. and Adeline M. (Vigue) Pomerleau.

He was educated in local schools.

Don enjoyed camping and motorcycle rides with his partner, Pam Beane; and he was much loved by Pam’s children and grandchildren.

He was predeceased by his parents; his brother David and twin brother, Ronald.

Don is survived by his partner of 20 years, Pam Beane; his brother Joseph; sister Ann; five nephews; and several cousins.

Bill was an avid New England Patriots fan. Everyone knew not to bother him during a game, especially when they were losing.

Bill was predeceased by his parents Robert W. Annis and Gladys Perkins Annis; a brother Robert Annis; and a son-in-law, Daniel Hood; Jane Cormier, who was like a daughter-in-law to him.

A celebration of life will be held at the VFW in Fairfield, Saturday, September 30, at 2 p.m.

WINDSOR––Aaron R. White-Sevigny, 25, died unexpectedly on Sunday, September 10, 2017, the result of a motorcycle accident. He was born in Augusta on August 12, 1992, a son of Roy C. T. and Jennifer Y. (White) Sevigny. Aaron attended Cony High School, in Augusta, and had been employed at White’s Auto for several years.

Aaron was a help to the community, from being a volunteer firefighter for Somerville to bringing food for the homelesss. He died doing one of those good deeds; he was riding his motorcycle with a bag of toys on his back for the less fortunate children.

Aaron was an avid sports fanatic and outdoorsman. He not only spent time playing football and disc golf with his friends, but watching the Bruins, the Red Sox, and having his own fantasy football team. As well as hunting, fishing, and dirtbiking, he also really enjoyed lots of time with his dad. They built and raced cars together.

Aaron had many friends that were like family, he was very loyal towards them. Anyone could give him a call and he would be right there to help.

Condolences, stories and photos may be shared through the funeral home website at www.plummerfh.com.

Those who desire may donate to help defray funeral expenses at https://www.gofundme.com/aaron-sevignys-funeral-expenses.

She graduated from Winslow High School in 1966, then continued onto nursing school and worked as a registered nurse at MaineGeneral Medical Center, at Thayer Hospital, in Waterville, for 33 years.

Paula raised two children, Bonnie and Joey, with her husband of 50 years, David. Paula loved her family, both biological and surrogate family. She loved hosting the annual family and friends’ barbecue every July for over 25 years. She had a love of books puzzles and crafting. She had endless love and generosity to give to everyone.

She was predeceased by her parents; her brothers Frank (Butch) Dolley Jr., Floyd Dolley, and Douglass Dolley.

Memorial donations may be made to Humane Society Waterville Area, 100 Webb Rd., Waterville ME 04901.

NONA N. BURK, 86, of Winthrop, passed away on Wednesday, August 30, 2017, at MaineGeneral Medical Center, in Augusta. Locally, she is survived by a daughter Tedda Henry and husband Rick, and grandson Mitch Henry, all of Augusta.

GLORIA GAYNE, 87, of Waterville, passed away on Sunday, September 3, 2017. Locally, she is survived by sons Doug Gayne, of Augusta, and Scott Gayne and wife Terri, of Winslow; and a cousin, Faylene Holt, of Fairfield.

RICHARD J. DUPLESSIS, 93, of Augusta, passed away on Wednesday, September 6, 2017, at the Veterans Administration Medical and Regional Offices, at Togus, following a courageous battle with cancer. Locally, he is survived by sisters Rita Valliere, of Augusta, and Christine Gay and husband Harvard, of Vassalboro; grandsons, Michael Bumford, of Windsor, Scott Bumford and wife Kim, of Oakland, and Jonathan Bumfored and fiancée Jen, of Augusta.

MICHAEL W. HARRINGTON, 68, of Augusta, passed away on Thursday, August 31, 2017, following a long illness. He was born on September 5, 1948, in Waterville, the son of William and Marjorie Lashus Harrington. He graduated from Waterville High School, class of 1966. Locally, he is survived by his mother, Marjorie Harrington, and a sister Kathy Cote, both of Waterville.