When I begin to reminisce about the Christmases-past, they all seem to blend together into a single memory of sparkling red and green. My Christmas in Korea in 1953 is a blur of khaki and canvas, homesickness and humor. I remember it well.

The 5th Regimental Combat Team was perched in the center of Chiporee Valley, just south of the 38th Parallel. We were the members of the Honor Guard Platoon. The war had recently ended, and the responsibility fell to us to shine our boots, clean our rifles, press our khakis and guard the officers of the Headquarters Company. Highlighting the drudgery of it all was the assignment we had of greeting dignitaries when they arrived by chopper to meet the brass before entertaining the troops. 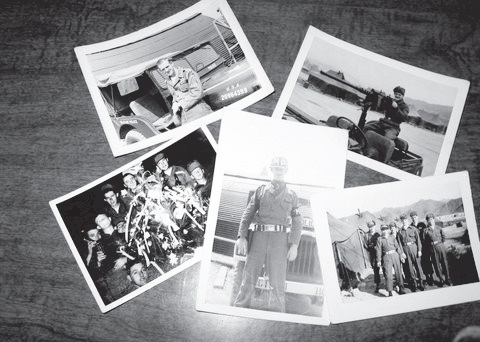 The spit and polish made it all worthwhile when we stood at attention to salute the likes of Marilyn Monroe, General Maxwell Taylor, Chief of the Far East Command; Accordion Artist Dick Cantino, and Catholic Cardinal Francis Spellman. Our days were filled with close order drills and practice sessions, twirling rifles in a variety of salutes. Our evenings were spent walking guard duty endlessly on the slopes of Chiporee.

The Honor Guards were housed in canvas, nine men to a tent, including two KATUSAs, (Koreans Attached to the U.S. Army). Pak Bu Hong was an older man compared to all the rest of us. He could cook up a wonderful Korean stew on one of the two kerosene stoves in our quarters.

Kim Yung Sam was the other native. His ready smile and passable English made him a favorite among the Koreans in our squad. His pay was 37 cents a month, more than GI’s paid for a pack of cigarettes back then. Our leisure time was spent listening to music on the radio in our tent or playing tag football or basketball in the warmer months. In the winter, we did a little hunting of pheasant or tracking mountain lions in the snow. It was mostly boring, but we passed away the time playing poker and getting in debt or reminiscing about our lives back home.

Homesickness was the common disease, but it was never as bad as it was at Christmastime. I only experienced one Christmas in Korea, but it was more than enough to rack up significant memories. Ed Seary from New Jersey was a huge guy with a soft voice and kind demeanor. He hardly ever said a word, but oh, could he ever play a harmonica. I’ll never forget that Christmas Eve when he played Christmas songs as we sang along. Our little Christmas tree, cut from a nearby hill, was dectonorated with homemade paper ribbons and blue and silver Combat Infantry Badges (CIB’s). It looked pretty darn good.

We were getting more than a little maudlin that night when suddenly our lieutenant burst into the tent to order us out for a full scale “bug out”. That meant we had to pack everything we owned, clamber into a 2 1⁄2 ton truck and head the heck out of there. A few miles down the road, we stopped, turned around and returned to camp. It was only a “yellow alert” a practice session to see how fast we could retreat in the event of an attack. I think the higher ups wanted to keep us busy on Christmas Eve as an antidote to the insidious homesickness disease. What really helped later that night, however, was when our lieutenant gained our undying gratitude by bringing to our tent a case of gigantic bottles of Japanese Asahi beer. The guard duty was on a hill behind our camp. This was a lonely job, made more lonely because of this special time of the year. The stars were out, featuring the Southern Cross and the Big and Little Dipper. On an adjoining ridge opposite ours was a huge red pentagon-shaped insignia of the 5th RCT, lighted by spot lights in the night. It was almost Christmas-like, but it made me sad. I really wanted to go home. To make matters worse, music drifted up from a tent down below. Joni James was singing “Purple Shades,” one of my favorite songs of the day.

As I sighed and strolled along the ridge, I saw flames from a fire, and proceeded to investigate. A small band of Korean civilians and an English-speaking KATUSA were huddled around the fire, roasting something on a spit. “Hey, GI,” he yelled. “Come in by the fire, get warm. Have some chow.” Their kind offer was politely refused. They were woking a Korean dog!

I think back now on that Christmas eve so long ago and remember with fondness the guys whose experiences I shared. They included Joe Vrable from Ohio and Ron Stahl from Illinois who missed their girlfriends; Denver Arnett from West Virgina, who was the sharpest looking soldier of them all; Roland LaTaille, a really funny guy from Woonsocket, R.I; — Kaffenburger from somewhere else. I don’t remember his first name either, but we never used it anyway; the two Katusa’s; and of course Ed Seary and his harmonica. I can still hear him playing “Sleigh Ride” on that unforgettable Christmas Eve. As nice as those memories are today, I sure do appreciate the holidays at home. Merry Christmas, you guys, wherever you are.

Milt Huntington is the author of A Lifetime of Laughter and Things That Make You Grin.