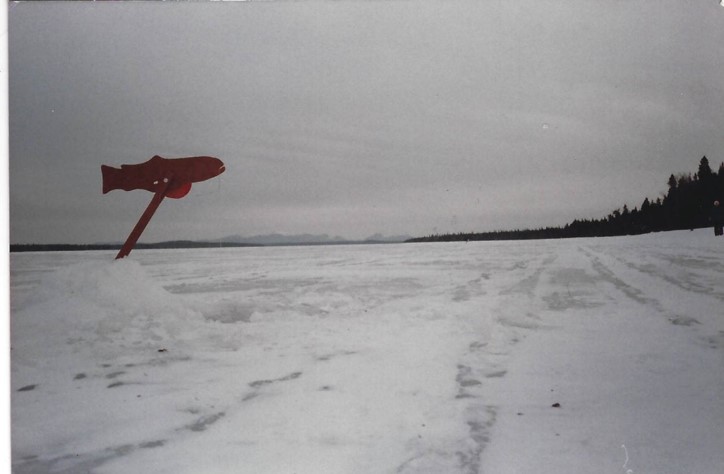 A Maine ice shanty is a temple reserved for those who consider ice fishing a religion. Being invited to enter a shanty is a privilege reserved for those few who can respect the language and rules of the house. All others must stand outside and only address the shanty’s congregation if the door is opened from the inside. Occasionally an exception can be made if someone falls through the ice and is freezing wet or if a member’s wife brings out a platter of food. 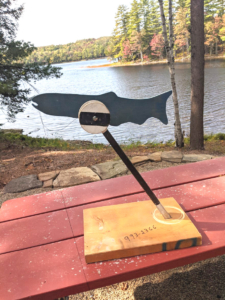 Archie Leeman’s Sheepscot Lake shanty was such a temple. It was placed off Bald Head where most of the lake could be surveyed. The congregation consisted of Archie Leeman, the builder of the shanty and skilled stone mason; Manley Scates, owner of the Scates General Store, in Palermo; Harold Sennett, owner of the blueberry barrens on level hill road; and Jim Grady, Palermo farmer and first snowmobile owner in town. These four friends could sit in the shanty for hours without ever talking. They communicated with each other only using sounds, grunts, mumbles, coughs, looks and the occasional word “flag” which was the signal for congregation members to look out the windows to determine whose trap had a flag and who had to walk or run, Other members would watch from the shanty’s warmth unless there was a yell for help.

Everyone’s fish traps were homemade ranging from a whip stick placed in a chiseled slot in the ice to a tip-up type trap with a red handkerchief attached as a flag. The line may be coiled on the ice or later wrapped on homemade birch spools. Although everyone sat quietly in the shanty the common thought was to always develop the ideal fish trap which would stay together in heavy wind, instantly notify the fisherman of a fish near or on the bait and finally set the hook and hold the fish until the fisherman got to the hole.

The only exception to fishing with traps was Manley Scates, a jig fisherman, who was damned if he was going to walk all over the pond checking traps. Manley never left the warmth of the shanty. His seat was over a jig hole next to the wood stove in the shanty where he would wrap the line around his fingers and sit quietly strumming his wrist like he was playing a guitar. It would not take very long for Manley’s head to drop into sleep. This was the time for Harold to mumble something about full bladder and leave the shanty. Harold would quietly move around to the corner outside of where Manley sat to reach under the shanty and yank Manley’s jig line. The explosion that occurred when Manley came alive sometimes kicking the stove off its stone while yelling, “Jaesus, wicked monster. Damn, lost him.” Harold would then enter the shanty zipping up to listen to the one that got away story. I don’t know if Manley ever figured it out or if anyone ever told him, but the rest of us never dropped off to sleep while Harold was with us in the shanty. Harold looked like a grumpy old man, but he had this twinkle which masked a full of fun brain, thinking about who would be next to experience his practical jokes.

Archie was the one who introduced all of us to ice fishing and the shanty. Since my wife Sandra lived with her Grammy Lil and grandfather Guy and uncle Archie during her younger years, we always enjoyed staying with family for a few days during ice fishing season. Archie and I or Norman would wake before dawn, drink a glass of milk with a couple raw eggs then stuff our pockets with Grammy Lil’s biscuits and head out on snowshoes down to the river and on to the lake. We chiseled our holes and set up our traps before we entered the shanty. Often others from the congregation would come snowshoeing in to join us. It was during these shanty meetings that I learned to love the rules and silent language of the shanty. No talking or humming unless you did it while walking around skimming ice holes. No questions, as you were an apprentice with the responsibility to watch, listen and learn. The ultimate compliment, if you did something well, was a pat on the back or a seat in the shanty to get warm. 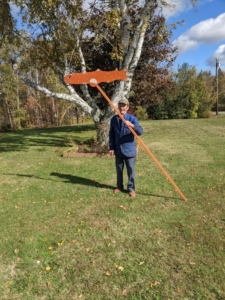 Everything was going well during winters of fishing, grunting, pulling Manley’s jig line and reading the inside walls of the shanty which were covered with pieces of tintype from the Kennebec Journal. Then there was the day that Jimmy Grady came roaring down the river and out on the lake sitting on some sort of contraption which looked like a seat on skis with him in front and a noisy engine in back. Jim said it was a Polaris snow machine which could take him anywhere he wanted to go all winter. Further, he announced that he would be the local dealer for these “snow machines” and when would each of the members of the shanty congregation like to order theirs. Everyone’s words cannot be repeated or printed, but they mentioned that nothing would replace snowshoes or driving out on the ice in the trucks when it got safe enough. However, by the end of that winter each of the congregation had to eat their words as they rode their own snow machines purchased from Jim Grady’s snow machine dealership.

Now you could set your traps further away from the shanty as the quick 8/mph ride to a flag made for more lake to fish and less fish lost. Everyone started living happily ever after until the snow machine cowboys started racing, spinning out and doing tricks on the lake. The straw that broke the camel’s back was the number of times these machines ran over and destroyed fish traps. This destruction by snow machine yahoos resulted in loud shanty meetings trying to find a solution. Of course, the first idea was to ban machines from the lake, but with the shanty surrounded by members’ machines banning would not work. A couple of guys cut six-foot ash poles to mark the fish holes. Another shoveled up piles of show to protect the fish traps. Instead, Archie Leeman figured he had to make a fish trap which was big enough to be seen and unique enough not to be ignored.

One day Archie caught a beautiful 17-inch brown trout. The light went on. Why not pay tribute to this brown, the most sporting of all trout, by putting the fish on the trap as the tip up. When Archie got back to the farm, he laid out the brown on a piece of plywood and traced the outline. He sawed out the profile and determined where the balance point would be. If the trap upright was notched and a bolt positioned across the notch, the fish profile could pivot on the bolt. The bolt could also pass through a line spool. It all sounded easy, but the fish trap had to be tested and modified so Archie would sneak down to the lake when no one was around to fish with this new trap. It didn’t take long to figure the Leeman fish trap could be introduced to the shanty members. Archie set up five traps with the brown trout profile as the tip up then came into the shanty and sat down. Harold offered the first comment, “Putting a fish decoy on top of the stick could call the keepers into the ice hole.” Archie replied, “That’s what I was thinking.” Manley’s contribution was, “Craziest thing I ever saw. No way am I going to give up my jig hole for a flatlander fish trap like that.” Jimmy Grady said, “Crazy or not no sled operator is going to hit a trap that visible.”

As luck would have it, Archie had a busy day of getting flags and catching fish. But he also began catching people on the lake. Everyone on the lake had to swing by the traps to try to figure them out. More people stopped by the shanty to ask why would anyone put a fish on a stick. The replies ranged from every conceivable reason which resulted in people walking away shaking their heads and four old friends filling the shanty with laughter. The immediate result was that three members, each wanted a set for themselves. Manley still refused to fish with a damn trap when his jig hole was right in front of him.

Sheepscot Lake Fish and Game club held a derby on the first Sunday in February. This was the ideal time to show the world the Leeman fish trap. Surrounding the shanty was 25 or 30 Leeman fish traps tended by the shanty crew and a few nephews who wanted to be part of this showcase of the Leeman trap to all at the derby. Snowmobilers, fishermen, and just people visiting the derby had to surround the shanty to see this trap in action. In fact, there were so many people attracted to the traps that the shanty members couldn’t see flags. But it didn’t matter as people would yell flag and run over to the trap just to see how fish were handled. That derby was a success as was the Leeman fish trap. Archie and Norman Leeman estimated they made 3,000 – 4,000 Leeman traps in the years following the introduction.

For the next few ice fishing seasons, the Leeman fish traps could be seen from Eagle and Chamberlain lakes to Moosehead to Sebago lakes, and constantly on Sheepscot Lake, in Palermo. Mainers were identified as members of the ice fishing congregation if they set out the Leeman traps. Unfortunately, over the years, the trap lost the name of the inventor Archie Leeman as it became known as the Sheepscot Fish Trap paying tribute to where it was first used in the Sheepscot Ice Fishing Derby. Even today Norman or one of his sons build a set of these famous traps as a prize for biggest derby fish. There is even a trap made with a four- foot fish which sits on top of an eight-foot pole which only comes out for the Sheepscot Derby to keep the story of the revolutionary Leeman Sheepscot Ice Fishing Trap alive.