When we first moved out to camp for the summer in mid-May, we heard something mysterious on our fourth day out there. It was after dark, and from a distance, we heard a wailing, lamenting  siren-like shriek. Everyone around was wondering what was making that noise. At first we thought it was a small, yiping dog. But it continued almost uninterrupted.

Then, someone mentioned that a family of foxes had been residing under the main office during the winter, and had recently moved out. 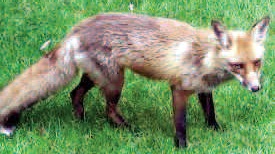 A red fox in the wild. Internet photo

That was it. The sound we heard was that of a red fox. It is common to hear those kinds of cry during the foxes’ breeding season, and thought to be emitted by a vixen’s (female fox) summoning males. Foxes generally greet each other with high pitched whines, particularly submissive animals. During an aggressive encounter they will emit a throaty, rattling sound.

An adult red fox has been identified with 12 different sounds while kits may produce eight.

The red fox, Vulpes vulpes,  is the largest of the true foxes and the most abundant wild member of the species. It is listed as least concern by the International Union for Conservation of Nature (IUCN). Besides its large size, red foxes are different from other species because of their ability to adapt quickly to new environments. There are 45 different subspecies of foxes. 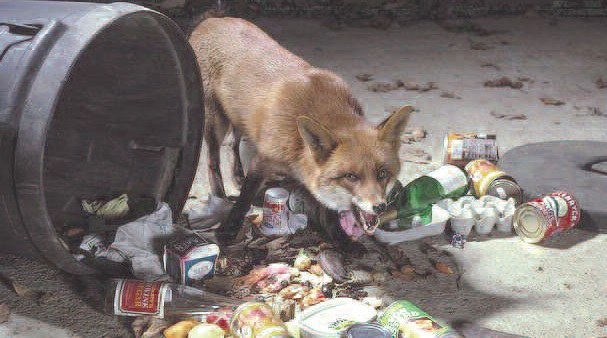 A fox working its way through a trash can in an urban environment. Internet photo

The red foxes have a long history of interacting with humans, having been extensively hunted as a pest and furbearer for many centuries. Because of its widespread range and large population, the red fox is one of the most important furbearing animals harvested for the fur trade. Too small to pose a threat to humans, it has successfully colonized many suburban areas.

Urban red foxes are most active at dusk and dawn, doing most of their hunting and scavenging at these times. Despite their search for usable food, foxes tend to eat anything humans eat.

These foxes can cause problems for local folks. Foxes have been known to steal chickens, invade rubbish cans and raise havoc in gardens. In our case, we heard that a nearby neighbor, who kept chickens, had many disappear in a relatively short period of time. They will also prey on domestic rabbits and guinea pigs if they are allowed to run in the open. Urban foxes have been known to encounter cats and may feed alongside of them. In confrontations, cats usually have the upper hand, although foxes have been known to attack cats, not so much for food but rather as a competitor for food.

Red foxes are not readily prone to be infested with fleas.

Red foxes live in family groups, sharing a common territory. They may leave their families once they reach adulthood if the chances of winning a territory of their own are high. Otherwise, they will stay with their parents, postponing their own reproduction.

Red foxes have binocular vision, but their sight reacts mainly to movement.  Their hearing though, is their strength, being able to hear a squeaking mouse at about 330 feet. Their sense of smell is good, but weaker than that of a domestic dog.

Being the largest of the Vulpes genus, on average, an adult male will measure 14-20 inches high at the shoulders, 18-35 inches in body length, and the tails measuring 12-22 inches. Their weight range is 5 – 31 pounds, with vixens weighing 15 – 20 percent less.

Red Foxes are often mentioned in folklore and mythology of human cultures. In Greek mythology, the Teumessian fox or Cadmean vixen, was a gigantic fox that was destined to never be caught. According to  Celtic mythology, witches were thought to take the shape of foxes to steal butter from their neighbors. In later European folklore, the figure of Reynard the Fox symbolizes trickery and deceit.

The red fox originated from smaller-sized ancestors from Eurasia shortly after the Wisconsin glaciation, which took place approximately 85,000 to 11,000 years ago. It was the most recent major advance of the North American ice sheet complex.

At camp, the red foxes have been sighted many times, and because of that, we can’t leave the sliding glass doors open while we are not there. With only the screen door between the outside and inside, our pet rabbit would be fair game for a red fox roaming in the area.

The scent of Dudley – our 9-year-old Holland lop – would probably be too much to resist.