Like I do every Saturday morning during the winter, I stand at my kitchen window, while I’m waiting for the Keurig to brew my first cup of coffee, and watch the bird feeders. The usual cast of characters come and go. However, last Saturday, I caught a glimpse of what looked like a redpoll.

I’ve seen them at the feeders before, but it’s been a while. That, in itself, is not unusual because redpolls are Arctic birds and are members of a group known as northern finches. They are denizens of the taiga and tundra, but will move south every couple of years in what is called irruptions. Irruptions occur when these birds, who normally reside in high latitudes, move south in large numbers. It is generally agreed these irruptions are triggered by shortages of food in their normal ranges. 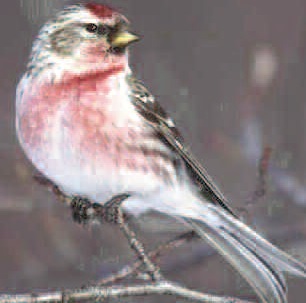 Redpolls, Carduelis flammea, are about 5 – 5-1/2 inches long with a wingspan of around 8-1/2 inches. They have a red cap, black chin, reddish wash on the breast, pink rump, somewhat forked tail, whitish under parts and overall brownish stripes. What is unusual about these birds is that they are relatively tame and show little or no fear for humans. It is believed that is because they live so far north away from human habitations. They can be confused with the house finch to the casual observer. I know I was when I first saw one.

Your next question would be, how do these little birds survive the winters of the tundra? Around the Arctic regions, winters last up to six months and temperatures plunge well below freezing. Research has shown that redpolls are able to survive temperatures down to -89 degrees F.

They have built-in heating systems. One of the most important anatomical adaptations is what is called their esophageal diverticulum, a partially bi-lobed pocket situated in the neck. They use the pocket to store seeds, especially before nightfall or before a storm. The extra seeds allow them to feed while sheltering from the cold. They also do like other species, by fluffing their feathers to trap layers of air to insulate their body to greatly reduce heat loss.

Redpolls will sometimes burrow into the snow to escape the cold weather. Under the snow, temperatures will remain at about -24° F even when air temperatures drop to -49° F.

Redpolls are attracted to backyard feeders, especially thistle seeds. In fact, the genus name Carduelis comes from the Latin Carduus, which means Thistle. Well-stocked feeders that attract finches will most likely attract Redpolls. One of our feeders is a fully stuffed sock of thistle seeds. Although I have not seen another redpoll to this date, I’m sure that is what attracted that one.

But, with redpolls, where there is one, there are many more. Outside the breeding season, they can form large flocks, which sometimes includes mixing with other finches. We have an unusually large number of American goldfinch at our feeders, so I’m wondering if the redpolls have intermingled.

Their main habitat consists of thickets and birches. In winter, they prefer semi-open country, including woodland edges and brushy or weedy fields. During the breeding season, they hang out in clearings of birch or spruce forest, thickets of willow, alder, or dwarf birch, bush areas on the tundra.

They are widespread and abundant, and are not listed as a bird of concern by the International Union for Conservation of Nature. Between 1955 and 2000, 342,158 Common Redpolls were banded. Of these, 698 were encountered at locations away from where they were banded. Studies show redpolls live up to eight years in the wild.

If you have thistle in your feeders, be on the lookout for them.